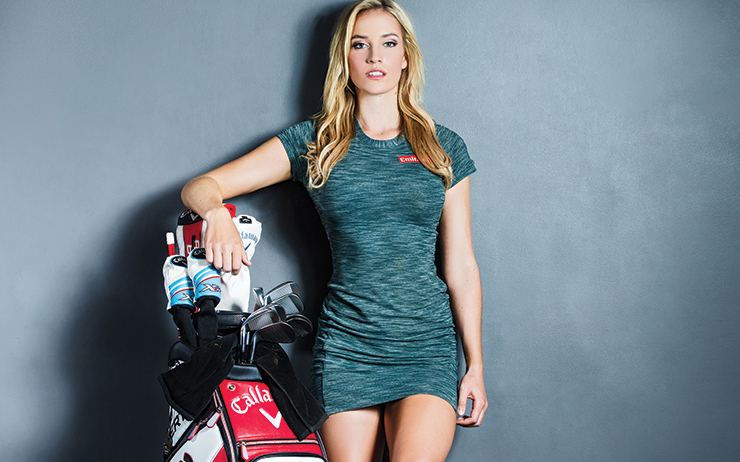 Paige Spiranac came to Dubai to prove she was not just golf’s biggest social media celebrity. During a remarkable pro debut that became a baptism of fire, Spiranac learned that while her game needs work, her spirit is just fine
By Robbie Greenfield
Photos by Farooq Salik

ew (if any) debuts in professional sport have have generated the level of hype that we witnessed last month when Instagram superstar Paige Spiranac made her bow in the Omega Dubai Ladies Masters. golf in DUBAi’s David Spencer called it ‘one of the most extraordinary things I’ve seen in the business of golf’ (and coming from the man who created the Race to Dubai, that is some statement). Desperate to prove to the world that she is more than some carefully constructed social media personality, Spiranac piled pressure onto herself and was then engulfed by a tidal wave of media scrutiny. Posting rounds of 77 and 79 that belied her obvious talent for the game, she handled a very public ordeal with class and charisma, and left knowing that this bitter disappointment may just be the most valuable lesson she’ll ever learn.

The inside story on Paige’s debut
Paige Spiranac was probably going above and beyond the call of duty by happily agreeing to another round of media interviews on the final day of last month’s Omega Dubai Ladies Masters.

Her appearance at the event (so controversial to some, despite the fact her only crime was to accept a sponsor’s invite) had already brought an unprecedented level of global attention to the Ladies European Tour’s season finale. She had been overcome by nerves in the tournament, snap-hooking her very first drive about 20 yards and addressing every subsequent shot with trembling hands and a thundering pulse rate. Her missed cut brought with it a very tearful meltdown and a suggestion that she was perhaps not cut out to pursue a career in golf. The next evening, Spiranac returned to take part in a star clinic,  sign autographs and pose for pictures with the watching kids. It was probably the last thing she fancied doing, but like every other new experience on this, her first trip out of the United States, she embraced it with a huge smile and an easy charm that was impossible not to admire.

It had been a pro debut unlike any other in the history of golf. Ninety-nine percent of the golfers that turn pro get to cut their teeth in tranquil anonymity on some low level mini-tour, away from the camera lenses, the galleries and the player cocktail parties. Some do get fanfare, but only if their amateur achievements are truly eye-catching. Tiger Woods brought a frenzied circus with him to the professional game, but the three-time U.S. Amateur champion was already so brilliant by then, and so used to the singular demands of public expectation, that he took it all in his stride.

Meanwhile, Paige Spiranac was just a college hopeful who got so famous that the world decided to tune in for the first time she pegged it up as a pro. And as it transpired, it was all a little too much to cope with.

“I think  she was carrying six shots of pressure in every round,” says golf in DUBAi’s David Spencer. “Regardless of the negative comments that some people made, she was great for the tournament and she’s great for golf. We need to build a bridge to attract younger people to the game, and she has the power to do that.”

This point brings us to the first real misconception about Spiranac, which is that she’s an attention-seeker. The first golfer to find mainstream fame almost exclusively by way of Instagram, the Arizona resident has three times more followers than any other female professional golfer on the app. At the rate she’s going (583,000 at last count), Spiranac could soon overtake Rory McIlroy as the most-followed golfer on the planet. And she hasn’t even cashed a cheque on tour yet.

If her bemusement at this rise to social media celebrity status is an act, it’s a convincing one. “A writer found my account on Instagram and did an article on me,” she recalls with a sheepish grin during an exclusive interview with Golf Digest Middle East last month. “And then someone else did one, and another, and another, and it all just snowballed from there. One day I woke up and I had 50,000 followers. I was like, ‘Mom, this is weird, I’m getting a lot of followers on Instagram!’ And she just replied: ‘What’s Instagram?’

“It’s super-flattering, but if you told me this was going to happen, I would have just laughed in your face.”

Social media (and particularly Instagram) has spawned an entire new generation of young people who wantonly chase online fame, yet Spiranac insists that while recognising her popularity as a means to an end, all she’s ever chased is success in golf. Well, that and her first love, gymnastics. “When I was a kid, I wanted to compete in the Olympics,” she recalls. “I was in the gym six days a week, seven hours a day. But I ended up fracturing my kneecap. After that, I realised I didn’t want to go after something where I could seriously hurt myself, so my dad was like, ‘you would like golf, it’s a little bit easier on the body!’

As disciplines they may appear to be poles apart, but Spiranac quickly credits gymnastics when reflecting on the ease with which she took to golf. “I had a lot of body awareness, flexibility and core strength. They are all huge when it comes to the swing. And I was a late starter at 13. I had a lot of catching up to do.”

With a somewhat unorthodox start to life as a golfer, Spiranac developed an appreciation for the game that is lost on the child prodigies whose early relationship with golf is part parental resentment, part raging competitiveness. Spiranac is not just a golfer; she’s a certified golf nerd. “The golf course is my happy place. There’s a serenity to golf that you don’t find in other sports. When I played Pebble Beach for the first time recently I was just staring open-mouthed at every hole until eventually people were like, ‘Paige it’s your turn to hit’.”

Though she took an instant liking to the Majlis, this famous old venue at Emirates Golf Club ended up shattering that serenity with a sudden jolt. Her perceived self-confidence is the second major misconception about Spiranac. Forget the perfectly executed Instagram flop-shots, when it comes to golf, she has been battling an inferiority complex since the day she first picked up a club.

“My parents didn’t really know much about the game. So I ended up playing in a national tournament like two months after taking it up, and shooting about 113. My early memories are of playing these tournaments and thinking, man, these girls are so good. And now it’s come full circle at the Ladies Masters because I’m still thinking that!”

Paralysed by nerves and self-doubt, Spiranac admits to agonising over whether to withdraw the night before last month’s tournament. “There are puddles on my bathroom floor from how many tears I shed this week. Every single time I stepped up to hit a shot, I was shaking. I had put so much pressure on myself. I’d never played in front of crowds or cameras either, so every time I would step on a new tee there would be something else going on. Going forward, it seems like every other tournament I play will not be as demanding now.”

Spiranac also admits to being affected by comments made by her army of followers on social media during the tournament, before confirming with a wry smile that this will be the last time she turns to her phone for support. “I was hoping to feel a lot of positive feedback, and there were more negatives, which made me even more nervous. I should have just been confident in myself and my game.”

Of all the new experiences to confront the 22-year-old during her Dubai Ladies Masters adventure, this realisation is the most profound lesson learned. “The bottom line is, I have to just focus on myself. I can’t control what other people say or think about me. I wanted people to like and accept me, but the fact is that may never be the case. My sister told me, ‘you might be the ripest peach on the tree, but there’s still going to be someone out there who doesn’t like peaches’. Going forward, I’m not going to let other people affect how I see myself.”

I have to focus on myself. I can’t control what other people say or think about me.

While Spiranac’s numbers on the course amounted to a personal failure, the numbers off it, aided in no small part by the attention surrounding her, represented a huge success for the Omega Dubai Ladies Masters. “We had a 30 percent increase in footfall this year and the news coverage was crazy,” says Spencer. “We would welcome her back with open arms. Part of our strategy is to attract more visitors from the U.S., and she has helped immensely to spread the word.”

Whatever she does from now, Paige Spiranac will always look back on the Omega Dubai Ladies Masters as the craziest week in the her life. As she begins to plan her 2016 tournament schedule, a return in 12 months could yet be on the cards. One thing’s for sure, the world will be watching.