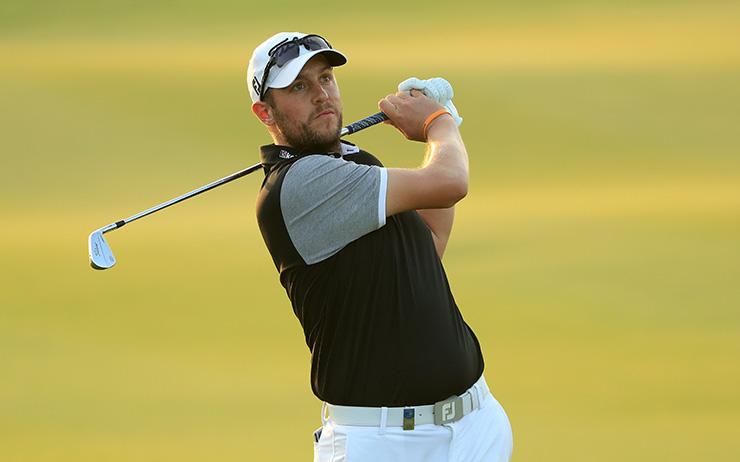 Matthew Southgate had his second ace inside a month on the opening day in Muscat.

By Kent Gray
With Frenchman Alexander Levy the highest ranked player in the field at No. 62 in the Official World Golf Rankings (OWGR), the new NBO Oman Open offers fading stars and lesser lights the chance to shine.

Paul Waring and Matthew Southgate duly obliged Thursday, the Englishmen grabbing a share of the lead in the $1.75 million European Tour event with seven under 65s.

Both went bogey free around the majestic Al Mouj Golf layout but Southgate’s card was illuminated by an ace on island green 5th. The seven iron dunk from 165 yards was the 29-year-old’s second hole-in-one inside a month after he binned a nine iron on the par-3 7th at Emirates Golf Club during last month’s Omega Dubai Desert Classic; it was also the second ace on the historic day in Muscat after German Marcel Siem holed out from 162 yards on the 13th moments earlier. In a bizarre coincidence, the caddies of both players are twin brothers – Gary and Guy Tilson.

Southgate and Waring lead by a shot from Dutchman Daan Huizing who hit the first shot of the championship and just 65 further strokes to cash in on a special invite having played four of the five Challenge Tour events previously held at Al Mouj, including a T-10 at last November’s NBO Golf Classic Grand Final.

Ryder Cupper Andy Sullivan and fellow Englishman Callum Shinkwin were a shot further back after 67s while Matteo Manassero’s name was a welcome sight among a group of six players on 68.

Waring, the world No. 251, will be relived with his fast start after a challenging beginning to 2018 which has seen the 33-year-old miss three successive cuts en-route to Muscat after opening the wrap-around season with a T-41 effort in Hong Kong before Christmas. 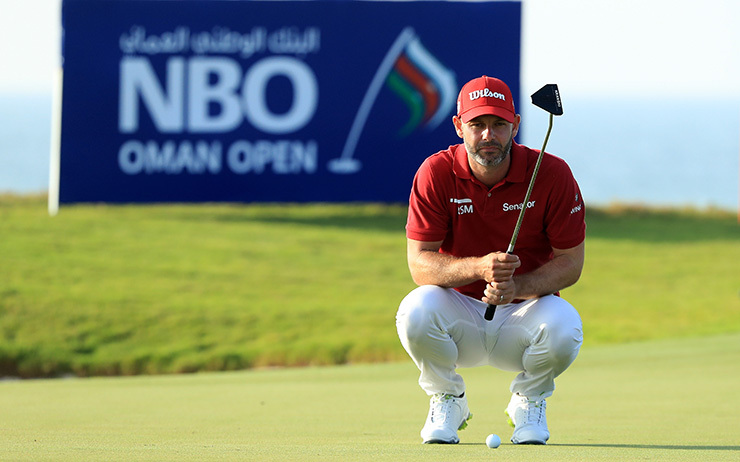 The 2005 English amateur champion played last season on a medical exemption after wrist and shoulder problems but also enjoyed a career-best campaign, finishing 60th on the Race to Dubai rankings and saw light despite the unwanted weekends off.

“I’d missed three cuts on the spin but I didn’t feel like I’d played badly to miss them. I didn’t feel too far away,” Waring told EuropeanTour.com after a round that included a hat-trick of birdies from the 14th (he started at 10) and birdies on all four par 5s.

“It was definitely a bit of a glide. I played some of the best golf I’ve played for a little while. I actually missed a few chances, which sounds ridiculous. I did hole a nice one on one from 30 or 40 feet which is nice to keep the momentum going. I’m really happy with that.”

Southgate’s early form hasn’t been much better than Waring’s. Ranked 163rd in the latest OWGR, he missed the cut at the SA Open and in Abu Dhabi before T-57 and T-62 finishes in Dubai and Kuala Lumpur.

It was a good day for this guy ?

The Southend-on-Sea professional provided one of the stories of 2015, coming through all three stages of Q-School to regain his card after surgery for testicular cancer just months earlier. More recently Southgate has been in the news for cruelly incurring a four stroke penalty at the DAP Championship during last September’s Web.com finals, a freak incident that ultimately cost him a PGA Tour card.

Putting on the 15th at Canterbury Golf Club in Ohio, his ball was struck by a leaf that blew across the green, nudging the ball off line ever so slightly.

Southgate finished the hole, but made a huge error in the process as he should have placed his ball back to its original location and replayed the shot without penalty. Instead, by continuing the hole, he was handed a four-stroke penalty – two for playing from the wrong spot and two more for signing an incorrect card.

Golf is hard … especially when you’re playing for a @PGATOUR card. ⛳️ pic.twitter.com/SoyWo6X01q

Sullivan, T-6 in Dubai and T-17 in Malaysia, is trending nicely as he looks to September’s Ryder Cup in Paris. The 31-year-old concedes complacency crept in after he slipped to 62nd place in last year’s Race to Dubai standings following back-to-back top 20 finishes in 2015 and 2016.

He achieved just two top-10s in 2017 but is determined to get back to the top after the high of qualifying for the 2016 Ryder Cup in Hazeltine.

“I think it was just a bit of complacency,” he told EuropeanTour.com. “I got to the Ryder Cup pretty early and achieved everything in really quick time and you just don’t realise how hard you have to work to maintain these things. I’d be guilty of that and of not quite performing how I wanted to.

“Since DP World we’ve put the hard work in and it’s nice to see it coming back to where it was so early. I didn’t expect it to happen quite so quickly.

“One of my goals is to try and force my way into that team. I know it’s going to be difficult and I’ve left myself a lot to do but that’s where I want to be again.”

Levy, for the record, signed for a one-under 71 Thursday, as did Andrew “Beef” Johnston.  Shubhankar Sharma, the 21-year-old Indian who leads the 2018 Race to Dubai after wins at the Joburg Open and Maybank Championship in the past two months, finished with a 73 despite a near tap-in eagle on the par-5 12th.

It was a tough day for the local hopes. Al Mouj teaching professional Steven Troup (SCO) is tied for 128th overnight after a 77 while Oman national team amateur Azaan Al Rumhy carded an 80. Bahrain amateur Nasser Yaqoob was on +13 after an 85.

Snakes and Ladders has Southgate, Luiten and Guerrier tied heading into Sunday in Muscat