A silver lining for Tiger Woods If Tiger didn’t know it already, he’s learned in the days since his DUI arrest that many of his fellow tour pros are thinking of him
By Tim Rosaforte

Thursday was the one-month anniversary of the infamous mug shot going viral and the news that Tiger Woods had been arrested for DUI. In the days that followed the May 29 incident in Jupiter, Fla., I’ve been struck by the continued compassion players I’ve interviewed have shown toward Woods—including those who have reached out to Tiger as he publicly admitted to issues with prescription pain medications and sleep disorder.

The tone was set when Martin Kaymer posted a heartfelt video via Twitter on June 1 and continued through this week, with Jack Nicklaus weighing in along with Patrick Reed and Justin Thomas. Whether I was at the Travelers Championship in Hartford, or talking to Phil Mickelson at the KPMG Women’s PGA Championship in Chicago, players were quick to lend their support to Woods.

Early reports are encouraging. Presidents Cup captain Steve Stricker and 2016 Ryder Cup captain Davis Love III told me they had been communicating with Tiger, who reportedly started treatment on June 13. While Woods may not be in a position to host the Quicken Loans National this week, he has been discussing with Stricker about still being with him and the U.S. team as a vice captain at Liberty National in late September.

“We had a nice talk,” Stricker said from his home in Wisconsin on Wednesday. “He sounds really good, taking care of the issues he has. He’s very much dedicated to getting better. He was moving forward and he sounded really positive and really happy, and is still fired up to be part of the Presidents Cup team.”

The players I talked to seemed more concerned about what Stricker called “the human element” than Woods’ playing career. “The message I’ve been on is we really don’t care about him as a player,” Love told me. “We care about him as our friend. We’re trying to get that point across to him. It’s not his celebrity. We want to know what’s going on. We want to know how we can help. That’s been my message to him, and he gets it, he appreciates that.” 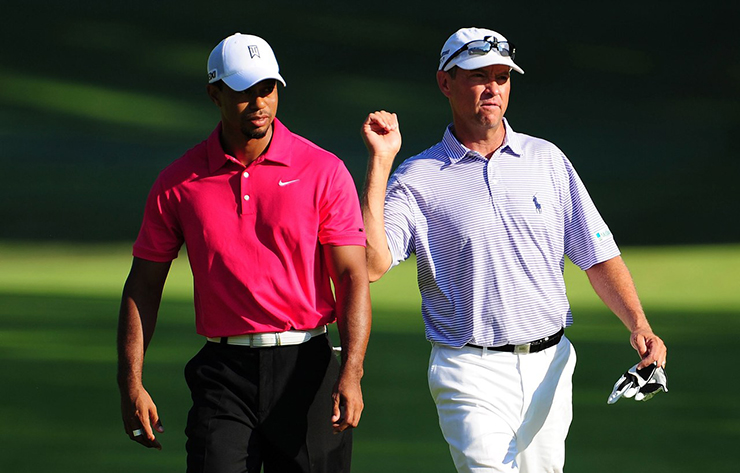 Love is one of several players to emphasis with Woods that they want to see him better whether he plays golf again or not. (Photo by Stuart Franklin/Getty Images)

Mickelson wouldn’t say he’s talked or texted with Woods, but intimated he had. “One of the things I’ve learned about from going through our tough times are two things,” Mickelson said, referencing the cancer battle his wife, Amy, endured. “Show up, and it’s better to say the wrong thing than to say nothing.”

Mickelson did say, though, that eventually he’d like to see Woods playing again, not for the betterment of the game, but the betterment of Tiger as a person. “I think he’s happy when he’s on the golf course,” Mickelson said. “So I hope this latest [back] surgery helps him get healthy to where he can play and practice and compete. I think he’s happiest when he’s competing.”

Brett Favre was the same way about competition, and he came back from treatment for painkillers to win Super Bowl XXXI in January 1997, the same season he voluntarily enrolled in the NFL’s substance-abuse program. Just last week, the legendary former Green Bay Packers quarterback was playing in Wisconsin in a celebrity scramble at the PGA Tour Champions event hosted by Stricker. He is featured in commercials for Wrangler jeans and Tommy Copper sleeves. From a dark place to a Super Bowl victory and Hall of Fame career, is it too much to think that Woods could reinvent himself the way Favre did?

Probably. While beat up, Favre didn’t have a fused back. But it’s really not about that. At this point it’s about Tiger and his health and the support he’s getting where he probably never expected it.

“Everybody has been asking me because we’re close,” Love said. “I was with another player [Tuesday] while caddieing for [son] Dru in a practice round for the Web.com [tournament in Nashville], and he asked me the same thing. The player said, ‘He really doesn’t realize how many people care for him.’ ”