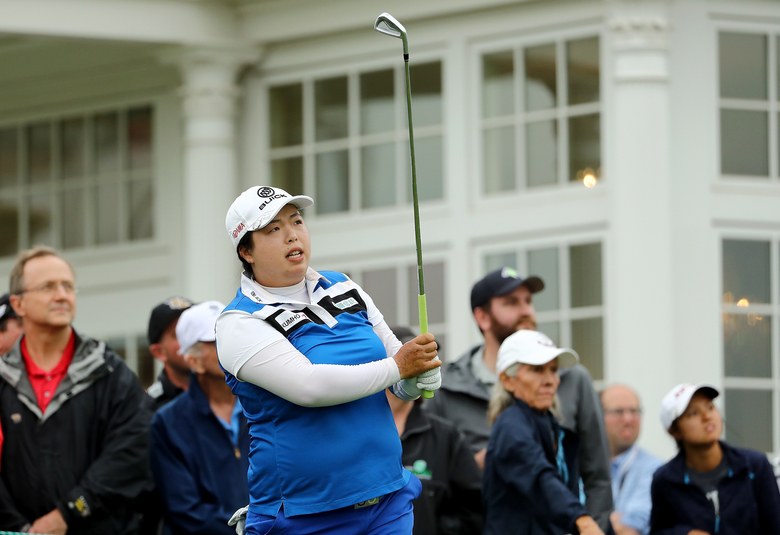 The rain at the U.S. Women’s Open finally stopped late Friday, but the course remained wet and playing long. Shanshan Feng played in the afternoon wave and had three birdies and one bogey on her way to a second-round 70 that gave her a two-stroke lead at eight-under-par 136 at Trump National Bedminster.

There is a three-way tie for second at six under among Jeongeun Lee, Amy Yang and Hye Jin Choi, an amateur from South Korea. This is Lee’s first time in the United States, and this is Choi’s second U.S. Women’s Open.

“I just did really well for the first two rounds, and I think that I should just keep doing the same thing for the weekend,” said Feng who won her fourth Omega Dubai Ladies Masters title last December. “So I’m not going to make any changes. I’m just going to be myself.”

There’s a decade’s worth of age difference amongst the top four players. Both Feng and Yang are 27, while Choi is just 17.

Choi, who was the low amateur in the 2016 Women’s Open when she finished T-38 at CordeValle, had four straight birdies on her ninth through 12th holes to get to eight under and a share of the lead. Bogeys on her 16th and 17th holes dropped her back to six under. Choi was the medalist in the qualifying site in Korea in June and has won a KLPGA event earlier this year.

“Last year’s experience gave me a lot more confidence than my first event and the results were pretty good, so I feel a lot better this year,” Choi said.

Choi’s six-under score is the second lowest 36-hole total in a Women’s Open by an amateur. In 1999 at Old Waverly, Grace Park was nine under at the halfway mark. The last time an amateur was this high on the leader board after 36 holes was Michelle Wie, who was T-2 in 2005 at Cherry Hills.