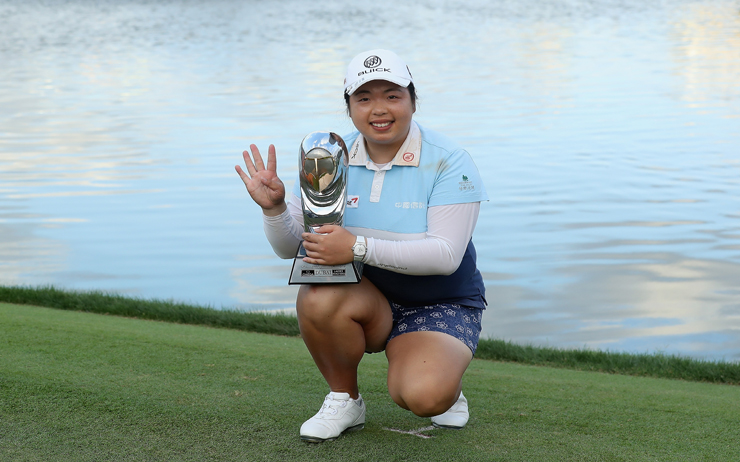 The engraver responsible for the Omega Dubai Ladies Masters trophy must be sorely tempted to plan a vacation for this time next year and get the apprentice in. Odds are another cut and paste “Shanshan Feng” inscription is all that will be needed in 2017.

The 27-year-old Chinese star swept to her fourth Dubai title in five years Saturday with a stunning eight-under 64 that defied leaderboard logic, event history and most of all the gutsy winds that buffeted the Majlis course all afternoon.

Feng mightn’t have the keys to the clubhouse at Emirates Golf Club but she pretty much owns the club’s marquee course, this time reeling off eight birdies in a blemish free round to finish the season-ending Ladies European Tour (LET) event, shortened to 54 holes, at -10.

Feng had started the final round of the LET season five adrift of overnight leader Felicity Johnson (England) and almost an afterthought given the icy cold putter she had wielded to rounds of 72-70 and a 36-hole share of 13th. More fool us all.

“Of course it was different, because I think in the first three times that I won, I was leading by five shots into the final days. This time, I was five behind so I knew that I would have to play hard to try to catch the leaders,” Feng said

“I knew that it was going to be windy today and I knew that playing in the wind is one of my strongest parts. So even though I was five behind, I always thought that maybe I would still have a chance to win this week and I tried my best. Eight-under was a pretty good score.

“Of course I’m so excited today, because I didn’t play super well the first two days. My putting was kind of lost and I’m very happy that I was able to putt well today and make a lot of birdies to make the crowds excited. I’m just really happy that I brought out my A-game in front of all the crowds.”

The feeling was most definitely mutual from the galleries, many of them here when Feng won in 2012, 2014 and last year

The Rio Olympic Games bronze medalist owns all the most important tournament records – including the low aggregate (-21 in both 2012 and 2015) and widest winning margin (12 shots last year) – and added another with her virtuoso finish, the 64 eclipsing her own lowest final round by a winner, a 66 last year which had matched the marker by 2013 champion Pornanong Phatlum.

If you want some really impressive figures then consider Feng is a combined 74-under par for 19 rounds on the Majlis. That’s a scarily good stroke average of 68.10; only once has she failed to break par, an opening 76 in 2013 when she still managed fifth place.

About the only record she didn’t claim Saturday was Dutchwoman Dewi Claire Schreefel’s 2012 course record score of 63 although she gave it an alrighty scare with birdie putts burning the hole on both 17 and 18.

Feng finally got her flat-stick firing despite the late misses and it was curtains for the field, among them Johnson who fell fell away to a 75 and a share of seventh place.

“I would say that the putting, yes, finally it’s working. You’ve been asking me the whole week, ‘oh, what are you doing, the first and second day, you’re not putting same as what you were doing here in the past years’. I asked myself, I didn’t know either,” Feng said.

So what did you do differently?

“I made small adjustments on my posture. I think I found like the most comfortable way to putt again. I was misjudging about the speed the first day, Yesterday, I got the speed better. Today I got the speed and the line better. So that’s why the balls were dropping.”

Over and over again, just like her rivals bowing to the Queen of Dubai. On second thoughts, the chief engraver probably won’t want to miss next year.