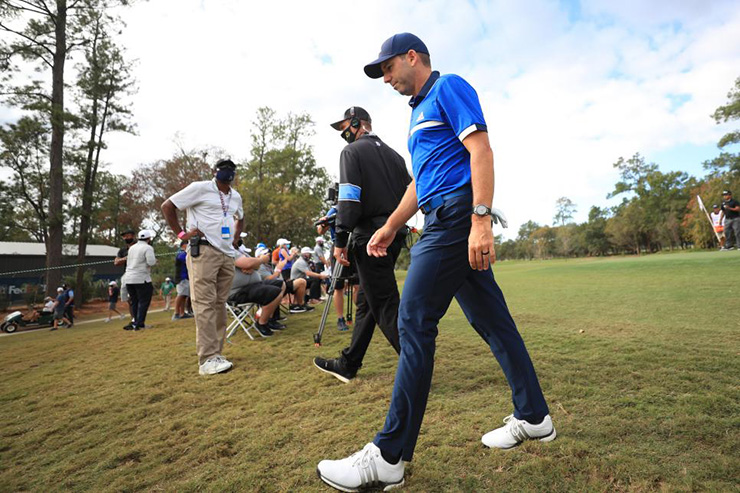 By Alex Myers
A positive COVID-19 test will keep Sergio Garcia from playing in this week’s Masters. It also means the end of a pretty amazing streak in major championships.

Garcia announced his withdrawal from the 2020 Masters with a pair of tweets on Monday morning. According to the 11-time PGA Tour winner and 2017 Masters champ, he decided to get tested Sunday morning after experiencing a sore throat and cough on Saturday after driving back to his home in Austin from the Houston Open, where he missed the cut.

Garcia became the second golfer to withdraw from the event due to COVID-19. Joaquin Niemann is also missing the tournament.

After 21 years of not missing a Major Championship, I will sadly miss @themasters this week. The important thing is that my family and I are feeling good. We’ll come back stronger and give the green jacket a go next April 👊🏼 pic.twitter.com/Ofpq1hBGYu

But while Niemann would have been making his pro debut at Augusta National this year, Garcia, 40, would have been continuing a streak of competing in majors that stretches back more than two decades. The last time Garcia didn’t play in one of golf’s four biggest events came when he didn’t qualify for the 1999 U.S. Open at 19.

He missed the cut at the Open Championship the following month in his first major as a pro then finished runner-up to Tiger Woods at the PGA Championship that August. Overall, he had played in 84 consecutive majors, the longest active streak.

Although Garcia, who won the Sanderson Farms Championship last month, is certainly disappointed to be missing the Masters—and Tuesday’s Champions Dinner—he can take a little solace in the fact he probably wasn’t going to catch Jack Nicklaus’ all-time record for consecutive majors. The Golden Bear played in a remarkable 146 in a row from the 1962 Masters through the 1998 U.S. Open. Yep, ONE HUNDRED FORTY-SIX! OK, so no one is ever matching that.

In any event, get well soon, Sergio. You can start another streak at Augusta National in April.