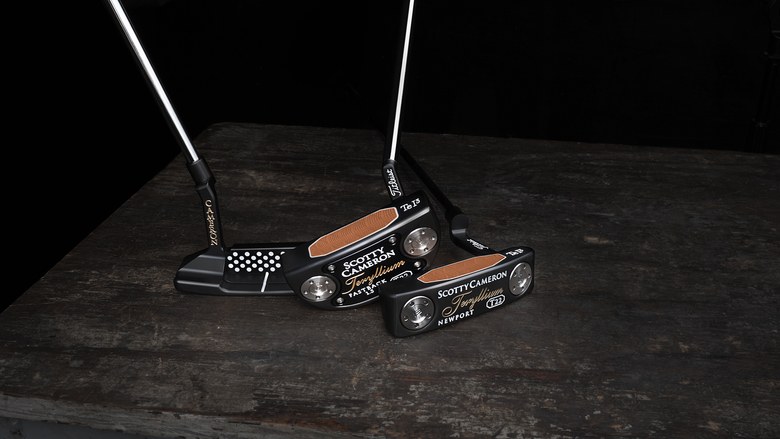 By E. Michael Johnson
When Tiger Woods won the 1997 Masters, he did so with a Scotty Cameron Newport Teryllium TeI3 putter, not the more-known Newport 2 GSS “Tiger” putter he has used for his other 14 major victories. Now, 22 years later, Cameron is releasing a re-imagined, limited-edition version of the putter, with three models under the name Teryllium T22.

“This insert has been one of the more requested from both tour and everyday players alike,” said Scotty Cameron. “Plus Brooks Koepka has won all his majors with a Teryllium-insert putter. So it just seemed natural that we revisit it.”

“We’ve seen an increase of mallet putters and a lot of people are set on using a mallet,” Cameron told Golf Digest. “Also, the neck on the Fastback 1.5 is a popular neck style. It has a little slant neck to it, which provides a bit of toe flow to the stroke, like the Newport and Newport 2 blades, but with a wider body and a longer line for alignment. Also, the wider body gives people peace of mind that it’s more stable, much like a utility wood is more comforting for many golfers over a utility iron. So we wanted to offer that option to those players.”

All of the models are precision milled from 303 stainless steel, and have a “tactical matte black” finish that brings out Cameron’s hallmark “domino pattern” in the back cavity. Among the other updates are a new Teryllium inlay construction utilizing an improved elastomer vibration dampening membrane, as well as removable sole weights and increased head weights that allow the putters to be more in line with putter weights of today, rather than the lighter heads that tended to be used back in 1997. As homage to the first putters, “TeI3” is stamped on the face, noting the use of Teryllium as well as three other materials: stainless steel, copper and the silicone membrane in the original.

The adjustable weights, in particular, are a critical aspect of achieving the proper feel for many players. Cameron noted that the original TeI3 did not include adjustable weights and only came in a 35-inch length. “When some people would cut the shaft length to what they desired, it threw the swing weight off and made the shaft too stiff. But we’re beyond that now. We want players to be able to feel fully comfortable with what they have.”

In addition to the weights, consumers also will see stepless steel shafts and a custom Limited Release Teryllium headcover and shaft band, along with a new black Pistolini Plus grip (with a thicker, less tapered low hand) that boasts a copper paintfill designed especially for the T22.

“T22 gave us the opportunity to take everything we’ve learned over the past two decades and refine the entire look, feel and performance,” Cameron said. “Like a modern day muscle car, everything looks original at first glance, but each component is brand new.”

Even if the inspiration is more than two decades old.