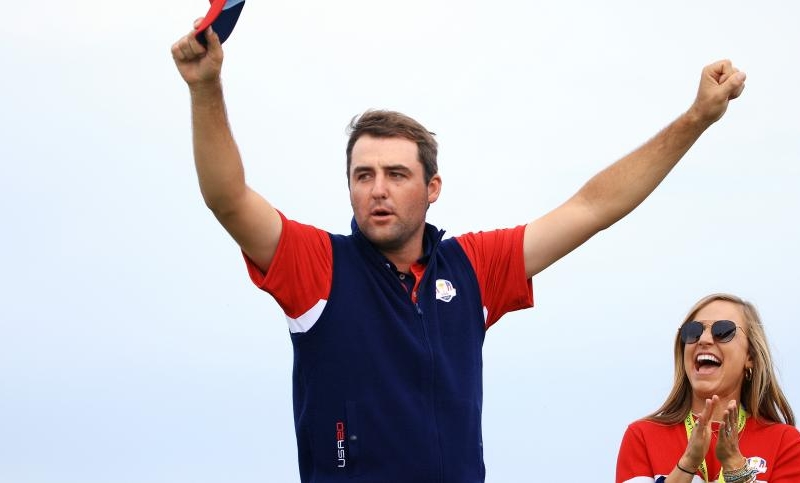 By Joel Beall
Scottie Scheffler has done a lot in little time. The 25-year-old was the PGA Tour Rookie of the Year in his freshman campaign in 2020 and put any worries of a sophomore slump to bed by making the Ryder Cup team in 2021. He is also something of a big-game hunter, finishing T-8 or better in four of his last six major starts to go along with a runner-up at the WGC-Match Play last season, and dusted World No. 1 Jon Rahm in Sunday singles during the American’s route at Whistling Straits.

The only thing Scheffler hasn’t done in his fledgling career thus far is win at the tour level (although he did win twice on the Korn Ferry circuit in 2019). Speaking at the Shriners Open on Wednesday, Scheffler was asked if it was odd to make the Ryder Cup without a trophy. Scheffler said if he wanted a victory for victory’s sake, he could check that box off. But he’s not willing to sacrifice his process to do so.

“As far as not winning on tour I think if I wanted to do something to where I could win a random event out here I would go play a weaker schedule than I do,” Scheffler said. “For me, I like playing tournaments against the best players in the world and that’s what our PGA Tour’s about and so I like competing and I’m not going to change my schedule I’m just going to keep trying to put myself in position to win tournaments.”

A glance at Scheffler’s schedule last season supports that sentiment; when the man plays, he plays in a loaded field.

To be fair, Scheffler is only 25, with less than 70 starts on tour. What he’s already accomplished at such a nascent stage of his career is impressive. Conversely, clearly there are benefits that come with a tour win, like a two-year tour membership and an invite to the Masters, and with other young guns like Collin Morikawa, Viktor Hovland and Sam Burns finding the winner’s circle, it would be understandable if Scheffler was feeling antsy to join their ranks.

Scheffler maintains he’s on the right path, and as long as he stays on it he’ll arrive at that destination, although did acknowledge that perhaps he needs to focus more during the early part of the week.

“Naturally I feel really patient, I don’t feel like I was saying earlier I don’t feel a huge rush that I have to win a golf tournament out here,” Scheffler said. “I feel like I’m going to play out here for a long period of time and I enjoy the way my life is now and for me I just want to continue to put myself in position to win tournaments.

“Honestly, I think what has probably held me back is not being in a that position enough, I feel like I don’t focus hard enough on these smaller tournaments on Thursday, Friday and Saturday to where I’m locked in the entire week I think I do a better job of that at major championships, I feel like I’ve had more chances to win majors than I have regular PGA Tour events and so for me I just try to get that focus level from here and take it to there (Indicating) on Thursday through Sunday.”

Scheffler, who enters the week at No. 22 in the World Ranking, tees off Thursday at 3:24 PM EDT with defending Shriners champ Martin Laird and Webb Simpson.