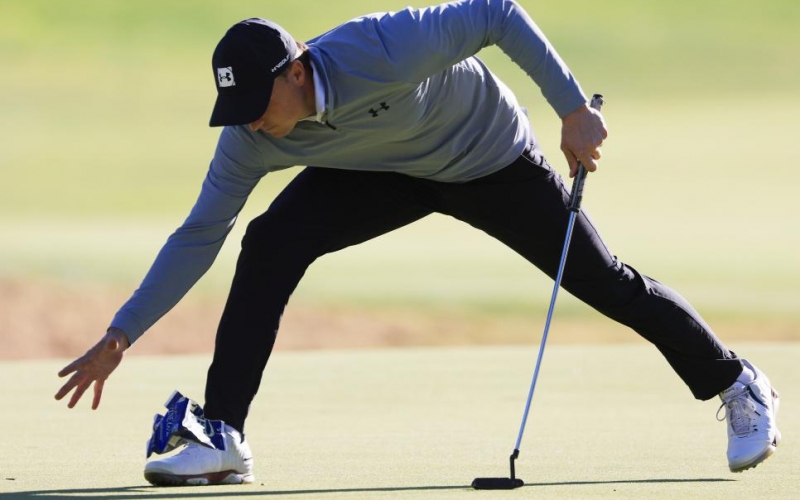 Sean M. Haffey
Jordan Spieth tries to catch an empty bag of chips as it blows across the eighth green during the third round of the Genesis Invitational.

By Brian Wacker
All the Hollywood glitterati were members of Riviera Country Club in Tinseltown’s heyday and many big names still are. But the star on Saturday was an invisible one, noticeable by what the players felt, and what their golf balls did, leaving some in disbelief.

Play was halted for four hours at the Genesis Invitational thanks to the unwelcome combination of unusually high winds for this time of year in L.A., and greens that were cut and rolled to levels simply too slick to contain golf balls in such conditions (see: Keegan Bradley’s calamitous putt on the 10th hole).

By the time play did resume, the wind had lightened significantly. But whatever absurdity had subsided, the course didn’t lose any teeth. Riviera played two strokes harder on Saturday than it did in the first two rounds and only four holes on the entire course—par 5s and par 3s—played under par when play was halted due to darkness.

Here are our takeaways from the third round, which will be completed on Sunday morning. 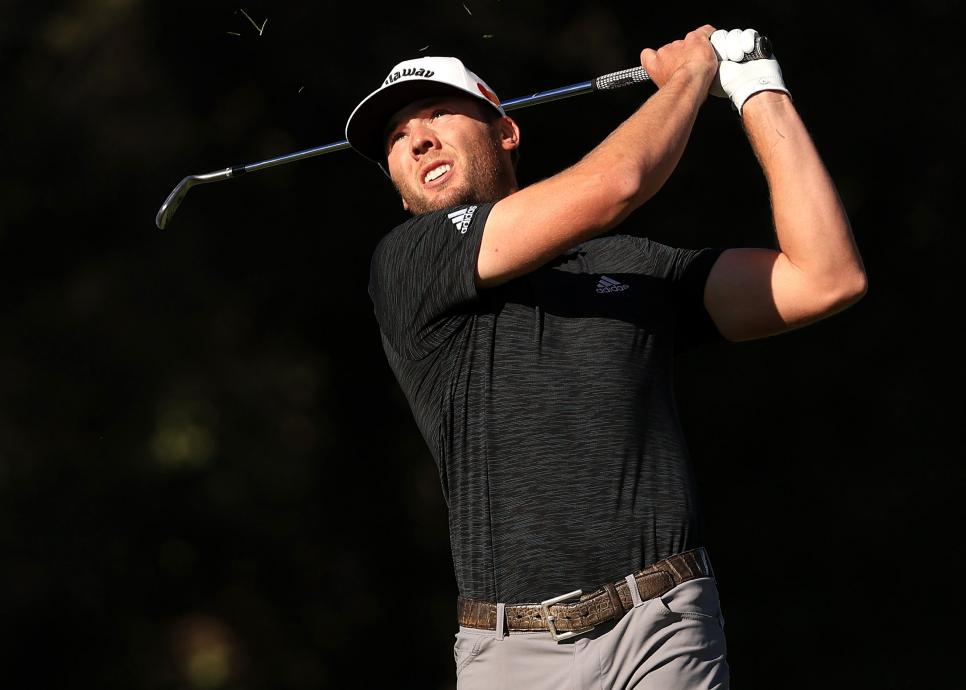 Sean M. Haffey
Sam Burns plays a shot on the fifth hole during the third round of the Genesis Invitational.

Burns leads … for now
Imagine one day being able to tell your kids that you stared down Tiger Woods, clipping him by two shots the first time you ever played together, then you won Woods’ tournament at one of golf’s great gems Riviera, where Woods, for all his greatness, never hoisted the trophy.

That’s the opportunity laying at the feet of Sam Burns, who three years ago was a wide-eyed 21-year-old paired with Woods during the third round of the Honda Classic. He was practically speechless in the moment and couldn’t feel the club in his hands. “He played beautifully,” Woods said of his playing partner that day. “He’s trying to build momentum and build his exempt status. Today and this week was a big step for him.”

Burns is past trying to gain exempt status, but Sunday will be a big day with the chance for a different kind of status, especially given the bevy of stars giving chase and the difficulty of the course.

At one point, it looked like Burns might run away from the competition. While almost everyone else struggled, he held mostly steady, making seven pars through his first seven holes, highlighted by an incredible up-and-down from an impossible spot in the rough right of the par-3 sixth. At one point, Burns went 31 straight holes without a bogey and the lead eventually stretched to five, even after the bogey-free streak ended on the eighth hole.

But bogeys on his last two holes of the day—Nos. 12 and 13—along with a missed birdie opportunity on the par-5 11th—dropped his advantage to just two over Matthew Fitzpatrick. It’s probably a good thing that the horn blew when it did, though the par-3 14th won’t be an easy place to start when he resumes his round at 6:50 a.m. local time on Sunday. 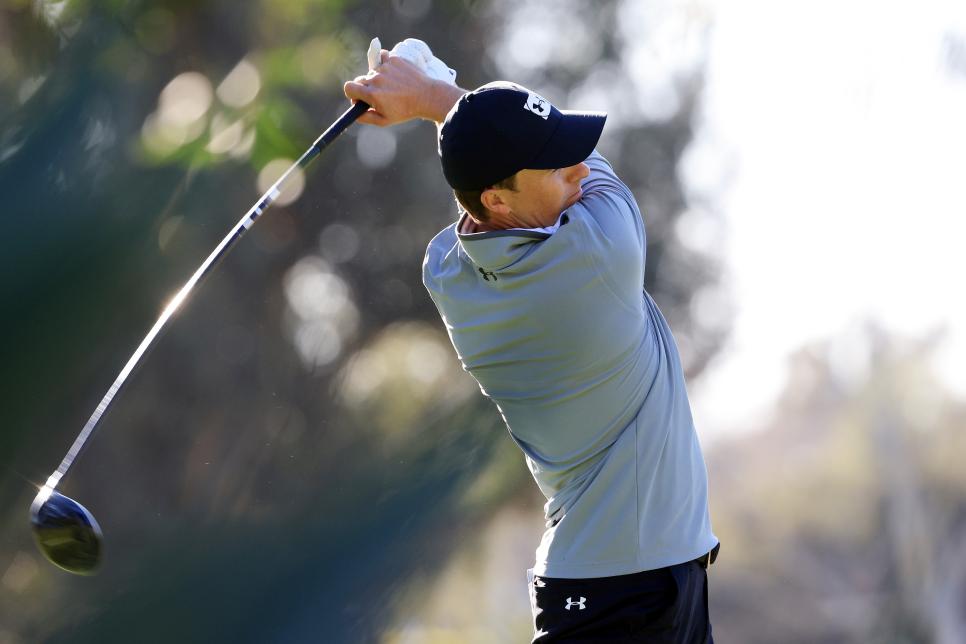 Sean M. Haffey
Jordan Spieth plays his shot from the ninth tee during the third round of the Genesis Invitational.

Spieth’s wild ride continues
We’re used to the ups and downs of a Jordan Spieth round, and for a third straight start are even warming to the idea of him being in contention on a regular basis. But the comeback is still a work in progress, as evidenced by a balky putter on Saturday.

Once tied for second and three off the lead, Spieth stumbled late, likely killing any chance of ending his nearly four-year winless drought this week.

The slide started on the 12th, where his approach didn’t hold and the ball rolled through the green. He chipped to three feet but missed the par putt. Two holes later, another miss, this from seven feet, and another bogey. Then one more bogey on the 15th.

Spieth was two over on the round and six strokes back when play was called.

Purely Fitzmagic
I don’t know which shot was better, the one that Fitzpatrick hit to tap-in distance on the par-4 eighthor the shot of it from the Goodyear blimp. Both were a thing of beauty.

That birdie was also one of four in a row for the Englishman, who went 3-2-3-3 on Nos. 5 through 8. Then came another gem, a 22-footer for birdie on the par-3 16th to move into solo second before play was called for the day.

It was also an incredibly wild afternoon for Fitzpatrick, who at one point went 10 straight holes without a par. It was indicative of what kind of day it was at Riv.

“This golf course does it to you,” he said. “You’ve really got to stick in, you’ve got to plot your way around and miss in the right areas.”

Homa delivers the shot of the day
For all the talk of the 10th hole being the greatest short par 4 in golf, it has become pretty one-dimensional these days. As reported earlier in the week, most players for years now have been opting to try to drive it somewhere near the front left corner of the green, rather than laying up, which has been proved to be a bad idea given the severity the green, even for a wedge.

Still, the hole can produce memorable moments. Max Homa’s up-and-down for birdie there on Saturday will go down as one of them.

After Homa drove into the front right bunker, he was left with an awkward and seemingly impossible 30-yard shot to a slick putting surface with little green to work with. Somehow, he spun the shot to six feet short of the hole. Then he made the putt, the ball trickling just in.

Tied for third and just three off the lead, if Homa goes on to win that will likely end up being the shot of the tournament.

Five observations from the first two rounds at Riviera.