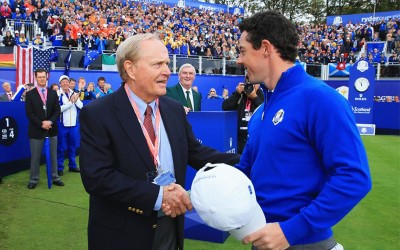 Rory McIlroy has often used Jack Nicklaus as a resource during his young career. This week, however, it was McIlroy who returned the favor.

On Tuesday, the four-time major winner discussed how he helped the 18-time major champ with his golf game. Why? Because Nicklaus wants to out-drive Gary Player when the two legends hit their ceremonial tee shots to officially start the 2017 Masters.

“I think I helped him more than he helped me. I adjusted his driver for him because he’s trying to hit it longer than Gary Thursday morning,” McIlroy said. “I told him, if he hits it longer than Gary, I want a mention because I adjusted the weight in his driver. He kept hitting it left. I said, If you adjust this, it might help. Obviously he’s very old school and whatever. I adjusted it for him and he started hitting these little fades. I was like, Perfect, there you go.”

See what you started, Gary?

Player out-drove his old pal last year and wasn’t shy about it. In fact, he recently tweeted what seemed like a little trash talk about it — and also a warning about this year’s opening shot.

Chuffed when you know keeping in shape just helped you drive by your friend’s ball 😜 See you in two weeks @TheMasters pic.twitter.com/jtERxJrzt7

Player may have the better fitness, but Nicklaus has arguably the best current driver of the golf ball. And McIlroy added that “it’s amazing how competitive” Nicklaus still is.

Oh no @McIlroyRory and I thought you were on my side 😜😂😉