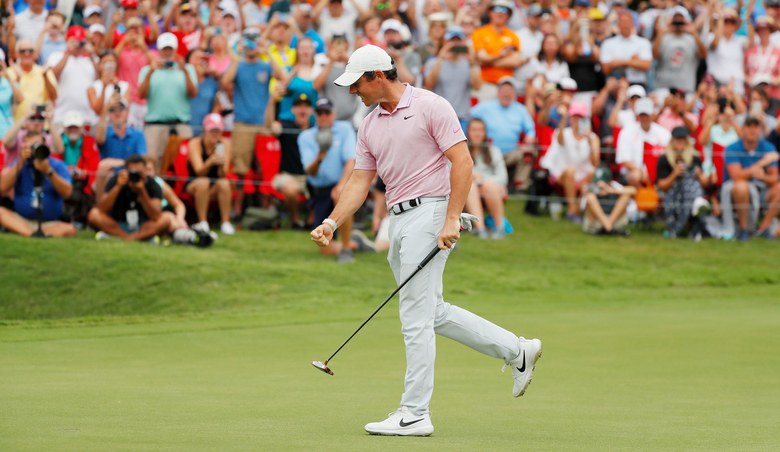 Kevin C. Cox
Rory McIlroy celebrates after winning on the 18th green during the final round of the TOUR Championship.

By Joel Beall
Last fall, Brooks Koepka dismissed any notion of a budding rivalry between he and Rory McIlroy. “I’m not looking at anybody behind me,” Koepka said at the CJ Cup. “I’m No. 1 in the world. I’ve got open road in front of me … I’m not looking in the rearview mirror, so I don’t see it as a rivalry.”

Someone needs to tell the big fella to refresh OWGR.com.

Although neither was in action this week, the Ulsterman will overtake Koepka for the top spot in the World Rankings when they come out officially on Monday. Koepka’s reign ends at 38 weeks, holding the No. 1 ranking since winning the 2019 PGA Championship at Bethpage Black in May.

This is McIlroy’s eighth time with the OWGR crown, but first since Sept. 19, 2015. Scheduled to play in this week’s Genesis Invitational at Riviera, McIlroy has finished fourth place or better in his last four starts, highlighted by a win at the WGC-HSBC Champions.

With the No. 1 ranking, along with the PGA Tour Player of the Year in tow, perhaps there is something of a competition between the two bruisers. Of course, we’d be remiss if failing to include the second part of Koepka’s McIlroy remarks.

“I’ve been out here for, what, five years,” Koepka explained. “Rory hasn’t won a major since I’ve been on the PGA Tour.”

Touche. Which reminds us, the Masters begins in 59 days.