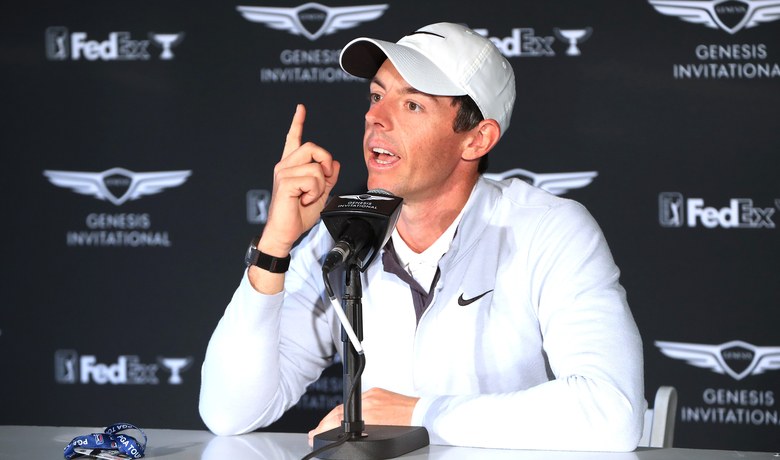 David Cannon
PACIFIC PALISADES, CALIFORNIA – FEBRUARY 12: Rory McIlroy of Northern Ireland talks to the media after he had played in the pro-am as a preview for the Genesis Invitational at the Riviera Country Club on February 12, 2020 in Pacific Palisades, California. (Photo by David Cannon/Getty Images)

By Daniel Rapaport
PACIFIC PALISADES, Calif. — As he struck perfect shot after perfect shot on a board-of-tourism day at Riviera, as he charmed his pro-am partners, and as he mused on digital minimalism and ADHD and global warming in his Genesis Invitational press conference, Rory McIlroy displayed the quiet confidence of man at the top of his profession, in the prime of his life.

He has every reason to be at peace with himself, and his game. The four-time major champion is teeing it up this week as the No. 1 player in the world, a spot he’s returned to after last summiting the rankings in 2015. It wasn’t he most climactic changing-of-the-guard, as both McIlroy and Brooks Koepka, now No. 2, didn’t play last week. Still, it’s nice to see your name atop any sort of ranking.

“Everyone keeps saying congratulations, but I said the work is only started,” McIlroy said. “Staying there is the hard part.

“Look, it’s a calculation based on how you’ve played over the last two years. I’ve played well and I’ve played consistently well. The mathematics add up that I’m at the top of the list right now and obviously I have a chance to stay there this week.”

He’s also the reigning PGA Tour Player of the Year, FedEx Cup and Players champion. He’s happily married and enjoys splitting his time between South Florida and Northern Ireland. In short: it’s good to be Rory McIlroy right now. As he said a few weeks ago at Torrey Pines: “I’m 30 years old, I have basically achieved everything that I’ve wanted to achieve in the game, like why would I be careful?”

Yes, the golf has been fantastic, even if he hasn’t won a major in nearly five years. But you get the sense that it’s his off-the-course pursuits that most fulfil him these days: Watching movies (he loved “Once Upon a Time in Hollywood” and all things Quentin Tarantino), applying lessons from books on 21st-century philosophy (he uses an app called “Freedom” that blocks him from visiting website on his phone), and being process-oriented rather than caught up in results (“I never look at it as ‘I want to win this, this and this’).

“For me, it’s all about the process and the steps…I rarely set myself goals of ‘I want to win this and I want to win that’ because all of those goals are just a byproduct of doing the little things right. I’m a big believer in that. If you get the little things right day after day after day and you practice good habits and those habits become completely ingrained in what you do, the rest will follow.”

McIlroy was asked about a hotbed topic in golf, the recently released Distance Insights report that identified ever-increasing driving distance as a problem that needs to be solved. Instead of launching into an impassioned defence of club manufacturers or making a caustic remark about progress in sport, he used the opportunity to discuss…sustainability.

“The biggest thing that came out of the report for me, a lot of the stuff about the ball going too far and technology, it really pertains to 0.1 percent of golfers out there. So, look, if they want to contain what we do as touring professionals, I’m all for that.”

He continued: “I think of the best things that came out of it was the sustainability aspect and the fact that architects building these golf courses, and the people giving the architects the money to built these golf courses with grand ambition of maybe having a Tour event one day—building these on massive pieces of land, having to use so much water, so much fertilizer, pesticides, and all the stuff we really shouldn’t be doing nowadays, especially in the climate we live in and everything that’s happening in our world.

He answered a few more questions before stepping away from the podium. The golf part of the day over, McIlroy was off to do who knows what—read, watch, or maybe just think. About anything but golf, of course.

“Honestly, anything to get my mind off this is a good thing.”