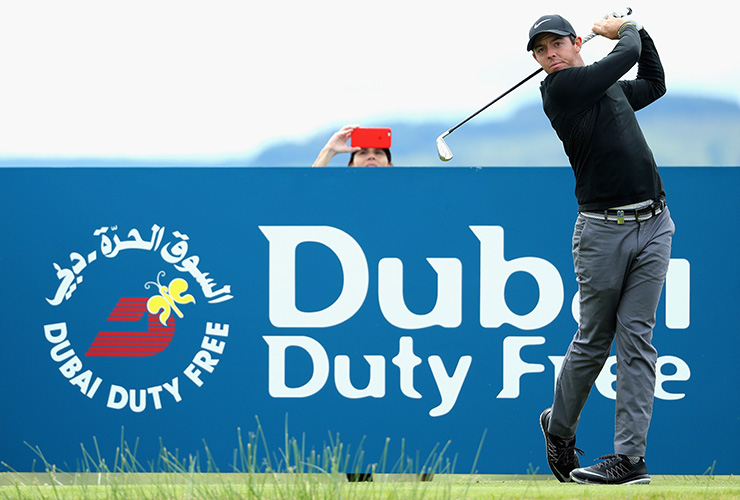 Rory McIlroy mightn’t trust himself on social media just now but it seems he is finally at ease where it really matters.

But it was the 28-year-old Northern Irishman’s assessment of his topsy-turvy 2017 form, rather than his rehashed Twitter feud with Steve Elkington, that had the mainstream media, and genuine golf fans, listening intently.

McIlroy’s season has been hampered by a rib injury sustained while testing for new equipment in Dubai early in the New Year. It forced him out of Abu Dhabi, the Dubai Desert Classic and The Memorial, the last withdrawal clearly not helping as he went on to miss the cut at the U.S. Open at Erin Hills which in turn fuelled the misguided Elk.

But a closing 64 at the Travelers Championship last month had McIlroy in a confident mood as he faced the media at Portstewart G.C. where he will attempt to become the first player to successfully defend the Irish Open since Colin Montgomerie in 1996-97.

“It’s been up and down obviously, with the injury and everything, it’s been a bit of a stop-start year. [But] there’s enough good in there,” McIlroy said of his form.

“I signed off at the Travelers with a 64 and played really well [and] I’ve played quite a bit of links golf over the past 10 days since being home.

“You never quite know till you’re out there in the heat of competition, but the game feels in really good shape. I don’t want to talk myself up too much, but my game is feeling good.”

McIlroy, off with world No. 2 Hideki Matsuyama and Spanish star Jon Rahm at 1.20pm local time (4.20pm UAE time) in Thursday’s opening round, even went as far as saying he felt “close” to ending his near three major championship drought. The #DDFIrishOpen is the opening leg of a three week links extravaganza culminating in the 146th Open Championship at Royal Birkdale.

“I’m close. Look, I’ve got two big opportunities coming up this summer. Birkdale is a golf course I feel I can do well at. I played there on Thursday. I feel like I got a really good feel for what I need to do around it and what parts of your game you need to have in good order.

“And then Quail Hollow for the PGA, I’ve won there two times, my first win on the PGA Tour and last time I won by seven. I got beat in a playoff before, as well, with a couple of top-10s. It’s a course I’ve got great memories and I’ve played well on before. I think they are two opportunities for me to get back on the major ladder and start to win those again.”

McIlroy admits his Irish Open breakthrough at the K Club last year had eased the “burden” of wanting to win his national championship so badly.

“There’s always that little bit of extra pressure when you come home to play and I’ve struggled with that in the past,” said McIlroy who will donate any prizemoney he wins this week to his Rory Foundation, the tournament host.

“I felt last year was one of the first times I embraced it, and I felt like I used the crowd support in the right way rather than it being a negative where you felt the pressure.”

McIlroy was asked to rate the widely hailed outward nine at Portstewart which is sculpted from towering dunesland. He didn’t disappoint the host club with his assessment – “in terms of scenery and what you see on the front nine, it rivals any front nine in links golf” – but can see the back nine being potentially more decisive this week.

“You’ll have a few people say there’s a couple of funky holes on the front nine. The second hole [for example] is a little — you’ve got that hill on the left and if the wind is anywhere off the left, it’s hard to hit the fairway.

“I think with the changes they made on the back nine, the back nine will probably play tougher this week. On the front nine, you’ve got some opportunities to score.

“But it [the front nine] is, it’s fantastic. That opening tee shot, you can see the Strand [beach] down your right and all the dunes, the fescue. It’s spectacular and if the weather stays like this, it will be great viewing and it will look great on TV.”