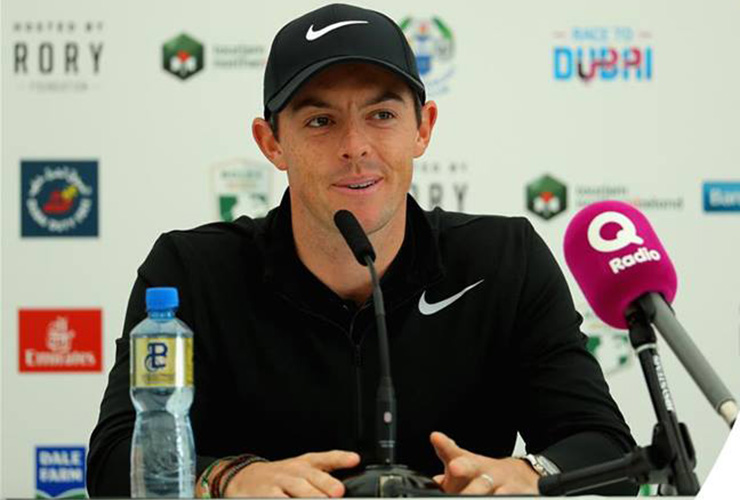 Former PGA Championship winner Elkington took to Twitter after McIlroy had missed the cut at last month’s U.S. Open at Erin Hills, accusing the 28-year-old Northern Irishman of being “so bored playing golf”.

McIlroy admitted Wednesday that he regretted his retort, despite widespread support in the wake of the tit-for-tat, but couldn’t help himself.

“I must have wrote that Tweet and deleted it about five times before I actually sent it,” McIlroy said at Portstewart on the eve of the DDF Irish Open where he is not only the defending champion but also tournament host via his Rory Foundation.

“I sort of regret sending it at the end [and] I actually gave my wife, Erica, my phone and my Twitter and told her: Change my password to something else and don’t tell me what it is.

“So as of the time being, I’m off social media just because of that reason. I don’t need to read it. It’s stuff that shouldn’t get to you and sometimes it does. So yeah, off it for a while.”

McIlroy admitted he would probably have insinuation that he was too rich to care slide had it not come from “inside the ropes”.

“It’s not what was said. It was who said it and who — anyone that’s been in that environment should realise how hard golf is at times, and I think that’s the thing that got to me more than anything else.

“If it was written by a member of the media or something, I could let it slide, because I can sort of say to myself, they don’t really know how it is and they don’t know what you have to deal with. But a former player that has won a major and been successful; that’s sort of why it got to me and that’s why I sort of retaliated a little bit.”