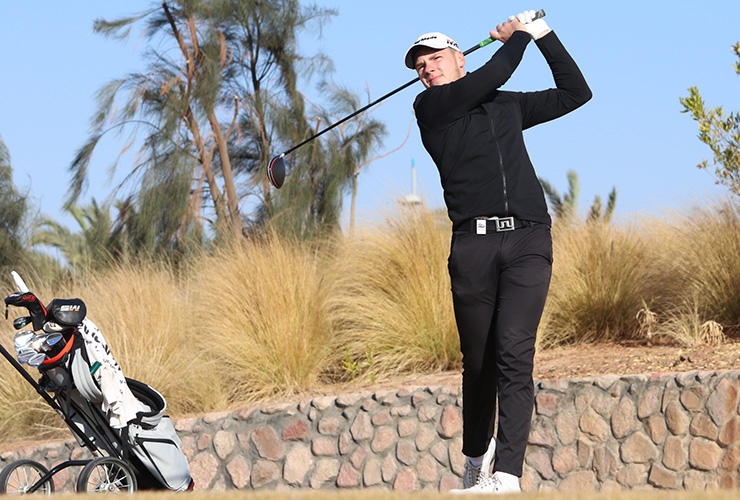 Joy Chakravarty/MENA Tour by Arena
Curtis Knipes in action during the opening round of the NEWGIZA Open near Cairo on Tuesday.

By Kent Gray
Curtis Knipes’ professional career might be in its infancy but the English teen is clearly in a hurry to get his maiden win in the paid ranks.

The 19-year-old set his stall out early, stating before the start of the 9th MENA Tour by Arena season that winning the season-long Journey to Jordan was his “main goal” as well as to “be consistent throughout the season and make some money.”

Fast-forward a week and Knipes has made good on that promise thus far. After a T-8 finish at the Journey to Jordan #1 championship in Aqaba, his professional debut, he made a blistering start to the new $75,000 NEWGIZA Open in Cairo on Tuesday, a bogey-free, six-under-par 66 earning a two-shot lead over seven players.

Indeed, taking advantage of the relatively benign morning conditions at NEWGIZA Golf Club, Knipes bolted out of the blocks with five birdies in his opening seven holes. He had to wait until the par-5 17th, where he holed a slightly fortuitous downhill, left-to-right breaker from 18-feet, to pick up another shot but it was good enough to earn the handy buffer over Scotsman Scott Henry, Englishmen Joshua McMahon, Tom Sloman, Joe Heraty and Robbie Busher, Frenchman Sébastien Gros and Swede Niclas Weiland.

“Yeah, very happy to get a bogey-free round in obviously,” said Knipes who later relayed frustration in being unable to convert good chances on the 9th, 12th and 14th, the latter when he wedged it tight and saw a short putt burn the lip of the cup.

“The nine pars after the hot start was a little bit frustrating because when you feel like you are on a roll you want to keep the momentum going.”

It’s not that Knipes is grumbling. He’s played his last three rounds in a combined 10-under-par and could have seriously challenged in Aqaba save for an opening 76. Indeed, if he’d been able to wipe four shots off that opening round to the season and sign for an even-par round, he’d have finished solo second at Ayla Golf Club.

But it’s a new week and a new venue for the MENA Tour with Egypt the 12th country to host an event on the regional development circuit as the 9th season heats up.

“The golf course, yeah, it’s a great track, I really like it. I think the layout’s really good and the set-up, it’s in really good condition, the greens are rolling nice,” said Knipes who qualified for last year’s Open Championship at Royal Portrush as an amateur.

“Conditions today, obviously this morning it was a lot calmer, there wasn’t too much wind which was nice, obviously give me the opportunity to get off to a good start and take advantage of that. It picked up a little bit towards the back nine, especially the last few holes which were playing quite hard coming back into the wind. Conditions are pretty fair out there [now] but I think we are in for a windy one tomorrow.

Knipes has one of the latter starts in Wednesday’s second round, off the 10th at 11.45am. He’ll be determined to make the most of his great start though after earning amateur honours in three events last season, twice alongside Dubai teen Josh Hill who went on to pip Knipes for the amateur Journey to Jordan OOM title.

England’s Curtis Knipes, who made headlines by qualifying for @TheOpen at @royalportrush last year, shot a six-under par 66 in the first round and is leading the NEWGIZA Open in Cairo, Egypt, by two shots.

He spoke about his bogey-free round and the golf course…@NEWGIZAegypt pic.twitter.com/XnpRnuANRW

Englishman David Langley, fresh from winning the season-opening Journey to Jordan #1 Championship last week, signed for a two-under 70 that could have been better save for a double-bogey seven on the 14th. Defending professional Journey to Jordan champion MG Keyser also had a 70 in his opening round of the season.

Former European Tour winners Romain Wattel and Richard Finch carded scores of 72 and one-over 73 respectively while the UAE’s only professional, Ahmed Al Musharrekh, fought back well from being two-over after six holes to finish on one-under-par 71.

Shergo Al Kurdi mixed six bogeys with two birdies in a 74 that left the Jordanian T-68 in the 85-strong field and with huge ground to make up if he is to figure anywhere near as prominently as his T-2 finish in Aqaba last week where he become the first player from the GCC to earn Official World Golf Ranking and Olympic qualifying points. The English-domiciled teen at least has the consolation of a share of the amateur lead in Egypt alongside Saudi Arabia’s Ali Alsakha.