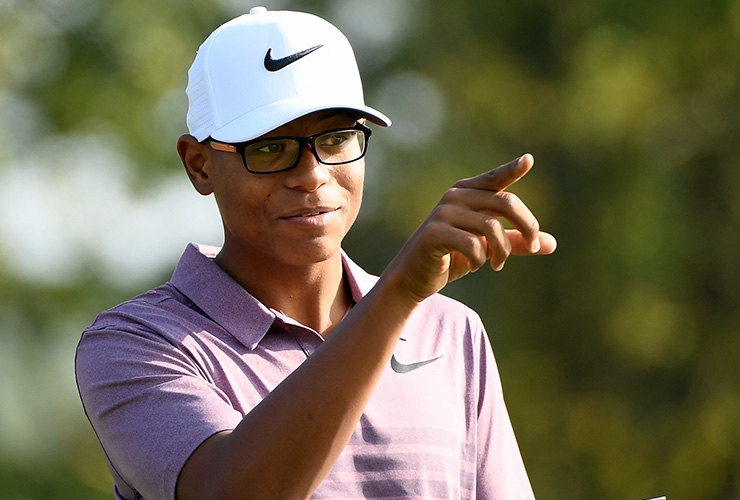 NEWCASTLE UPON TYNE, ENGLAND – SEPTEMBER 26: Robin Williams in action during a practice round prior to the British Masters at Close House Golf Club on September 26, 2017, in Newcastle upon Tyne, England. (Photo by Ross Kinnaird/Getty Images)

By Kent Gray
Robin ‘Tiger’ Williams will take a one-stroke lead into the penultimate round of the Journey to Jordan-2 event after headlining a day for the amateurs as the MENA Tour season resumed after a six-month summer hiatus on Monday.

The South African-born, Peterborough-based England age-group representative fired a 68 at Ayla Golf Club in his first MENA Tour round. The four-under circuit of the Aqaba layout saw the 18-year-old edge a group of five players on 69 for the overnight lead, including Order-of-Merit (OOM) contender Daniel Gaunt (Australia) and fellow English amateur Jack Floydd.

His name is Robin Williams.

Everyone calls him ‘Tiger’.

But can he be England’s next @JustinRose99?

Amateur OOM leader Curtis Knipes shares seventh-place on 71 alongside Miguel Jimenez Jnr, the son of the European Tour legend, and Dubai-based South African MG Keyser who needs a top-five finish to leapfrog from third in the ‘Journey to Jordan’ OOM race to first.

Jordanian Shergo Al Kurdi had the honour of hitting the tournament’s opening tee shot and 71 strokes later had signed for a 72 and a share of 11th to continue the red-letter day for the amateurs.

Arjun Gupta was the best of the Dubai-based amateurs with a 75, three shots better than Josh Hill (78) while Toby Bishop carded a 79.

Williams, currently rated 100 in the official World Amateur Golf Ranking, has been as low as 76. The Peterborough Milton Golf Club member, who was born in Stellenbosch, Cape Town, shares the same middle as Tiger Woods but was not named after the late comedian Robin Williams as he is frequently asked.

In September 2017, at age 16 and one week, Williams emulated Rory McIlroy by making his debut in a professional event at the same age and tournament, the British Masters, as the Northern Irishman. He played in last year’s Junior Ryder Cup.