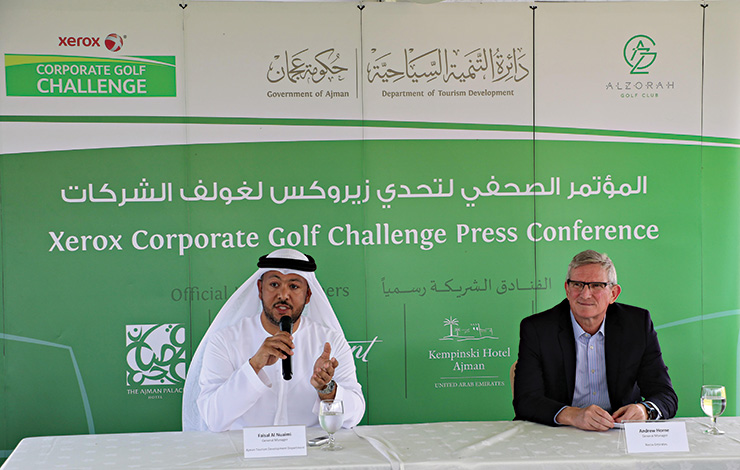 We caught up with Andrew Horne, the general manager of Xerox Emirates, at last month’s launch event at Al Zorah Golf Club

hat is your assessment of the 2015 Xerox Corporate Golf Challenge?
The event went extremely well. We had 14 qualifying rounds and then a two-day grand final at the Waldorf [Astoria] and the feedback from the players was incredible. We had 1,300 golfers taking part across the year, which speaks to a very successful edition.

How did it go from a fundraising perspective?
We were a little bit behind our target. We wanted to raise enough to sponsor an African eye camp in its entirety, and we’re not quite there yet, so we’ll continue. But we raised some good money with some activities at the tournaments, where the sponsors played a terrific part. Overall, I think we’ve raised close to $14,000 to date.

You’re launching the 2016 series at Al Zorah Golf Club, who will host the final. How did that partnership come about?
We had two great years up in Ras Al Khaimah, and we know that Ajman Tourism is very keen to promote Ajman as a golfing destination. It provided us a great opportunity to partner. We wanted to keep refreshing the series as we go forward and this was a chance to come somewhere new, to an absolutely fabulous course. I had the pleasure of playing it and it’s a very beautiful course. We have our first qualifying round at Al Zorah on March 3 and then there will be a two-day grand final in partnership with Ajman Tourism and the four participating hotels. And for the finalists again, there will be one complimentary night in a partner hotel and two rounds at Al Zorah Golf Club to look forward to.

Last year you held qualifiers all over the region and as far afield as South Africa. What does the schedule look like in 2016?
We had 14 qualifying rounds last year, whereas we have 16 this year. We’re adding Egypt and Kenya, which is terrific. Adding two more rounds should mean that we also add around 150 golfers to the total number of players. And that’s the objective, to give business people the opportunity to network and have some fun.

What’s the thinking behind adding more qualifiers in Africa?
Well, Africa’s a growth market. But the tournament isn’t so much an emirates tournament as it is a Middle East and Africa tournament supported by the Xerox brand. We are a core part of the organisation of the tournaments, but fundamentally any coverage across the MENA region is of interest.

Will the playing format in the qualifiers remain the same?
There will be a few changes, and we’re trying to add a bit of fun. It will enable people to have a bit more of a strategy when they’re playing, because even though a team might not have a round that enables them to win, they could still qualify for the final through doing well on particular holes. That’s all I can really say on that for now!