Race to Dubai Year in Review: One very strange year 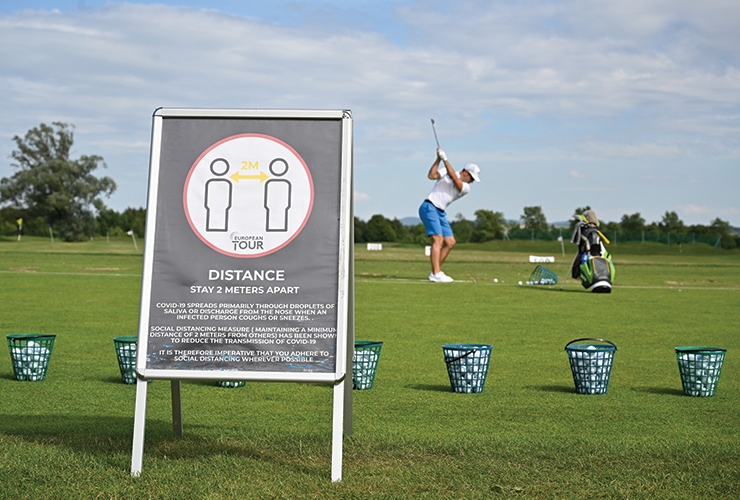 Social distancing and other advice against COVID-19 is seen during practice prior to the Austrian Open at Diamond Country Club. Getty Images

As this Race To Dubai season like no other closes in on its final fortnight at Jumeirah Golf Estates, we ask what happens next for the European Tour.

By Kent Gray
Keith Pelley is in Doha trying, like everyone else, to wrap his head around a strange new world.

It’s March 7, a day before Spaniard Jorge Campillo would capture the Commercial Bank Qatar Masters at Education City Golf Club and Pelley shortly thereafter pulled the trigger to suspend the European Tour’s 2020 season. The coronavirus is sweeping the world and golf’s global house of cards is falling on the Canadian chief’s watch.

The Maybank Championship and Volvo China Open had already been cancelled and now the following week’s Magical Kenya Open was gone. Everyone had questions and Pelley, quite understandably, had very few answers. What he did know was that his every move had the potential to radically alter the lives of everyone associated with the world’s second-largest circuit.

“There are probably quite a few moments I could recount as it has truly been a year without parallel for all of us,” the European Tour chief executive says when prompted for a particular event that has defined 2020 for him personally. 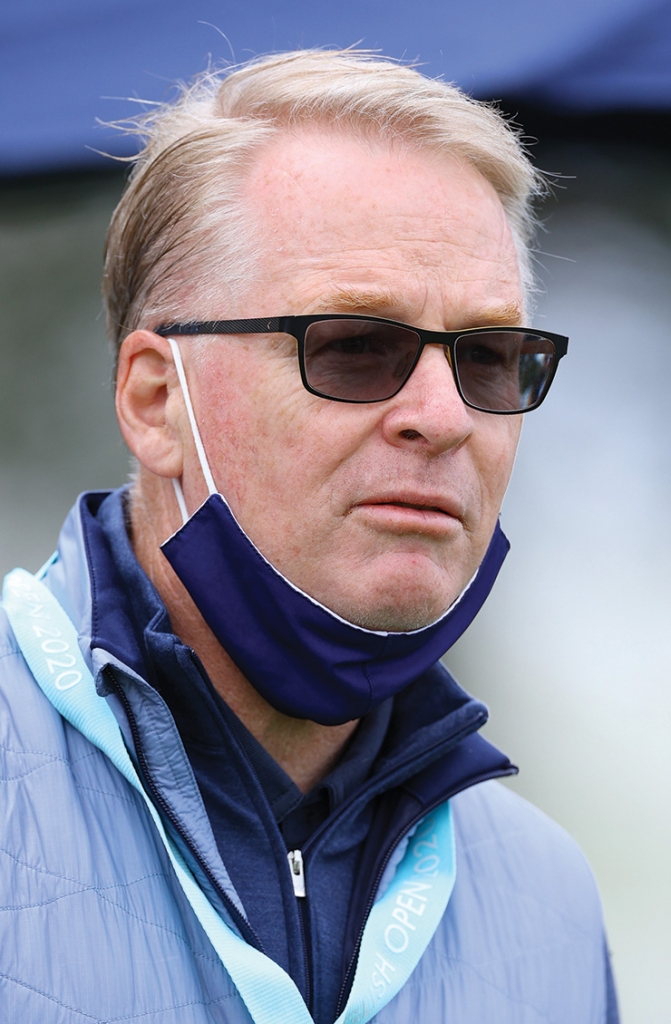 “You can expect to see us continue to play in geographical clusters a lot more.” European Tour CEO Keith Pelley

“But in terms of a moment… it was the day after our tournament the following week in Kenya had been cancelled by the Kenyan authorities and a player came up to me on the range in Qatar and said: ‘The Masters will be okay though, won’t it?’.

“At that time nobody knew what to think, but the very next week it was cancelled by Augusta National. I think it was at that point that everybody thought, right, this is going to be one very strange year.”

By the time the 12th DP World Tour Championship is decided on Earth come December 13, more than a month later than originally scheduled, Pelley’s tireless team will have successfully delivered 23 tournaments in the four crazy months since the tour’s July 9 resumption. Of those, 16 have been created from scratch including the Golf in Dubai Championship which will be played on Fire, Earth’s sister course at Jumeriah Golf Estates, the week before the Race to Dubai decider. Pivot, pivot and pivot some more.

Events have fallen over, some never to return as corporate giants were suddenly confronted by a new and still uncertain fiscal dawn. Purses have plummeted, making the rich PGA Tour even more attractive to the game’s biggest names. Galleries have gone too with no certainty when a free flow of fans will be allowed back behind the ropes.

The challenges of global travel, even for those who can afford private jets, means the DPWTC won’t have a defending champion this year. Like Jon Rahm, you likely won’t find any trace of Rory McIlroy on Earth either. 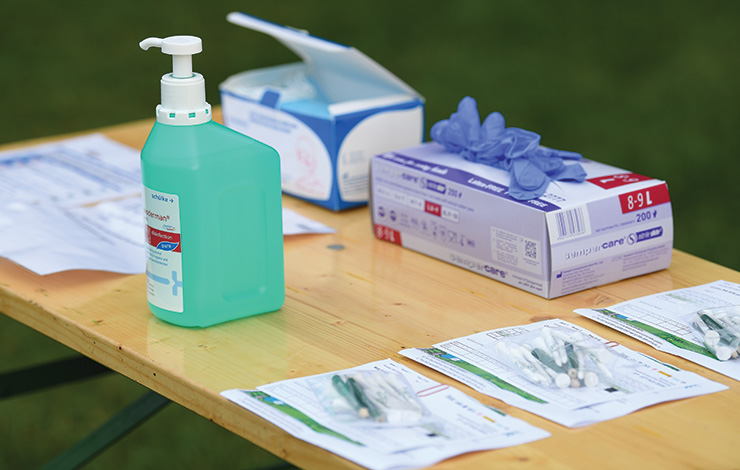 Tees, scorecards and pencils are laid out in protective plastic packets alongside hand sanitiser on the first tee during the Austrian Open. Getty Images

Thankfully, the top 5 in the Race to Dubai standings – Patrick Reed, Tommy Fleetwood, Collin Morikawa, Lee Westwood and Victor Perez – will tee it up in the decider. But the European Tour has changed forever and it’s no stretch to suggest what happens after the final putt on Earth will be the most fascinating moment of this weird year.

Normally Pelley would front a ‘state of the nation’ style press conference at JGE but with very few media representatives seeking accreditation, the announcement is now “planned before the end of the year”.

So what will 2021 and beyond look like? As Pelley and co. scrambled to re-set the season during the lockdown, the chief executive braced his members for a “radically different” tour and even a “glimpse into the future”.

It started with a pair of events in Austria and then a six event UK Swing. Expect more of the same, perhaps even the bunching together of the Middle East’s five early season events – Abu Dhabi (Jan. 21-24), Dubai (Jan. 28-31), Saudi (Feb. 4-7), Oman and Qatar – to allow players to remain in a bio-secure bubble.

“You can expect to see us continue to play in geographical clusters a lot more,” Pelley told Golf Digest Middle East. “We’ve always traditionally had the Middle East or ’Desert Swing’ at the start of our season, but since our resumption, we have had two events in Austria, two UK Swings, the Iberian Swing, the two consecutive Cyprus events following the Italian Open and now the South African swing and the two Dubai events. It has worked well and the feedback has been positive from players, partners and broadcasters. This has shaped our approach to our 2021 schedule.” 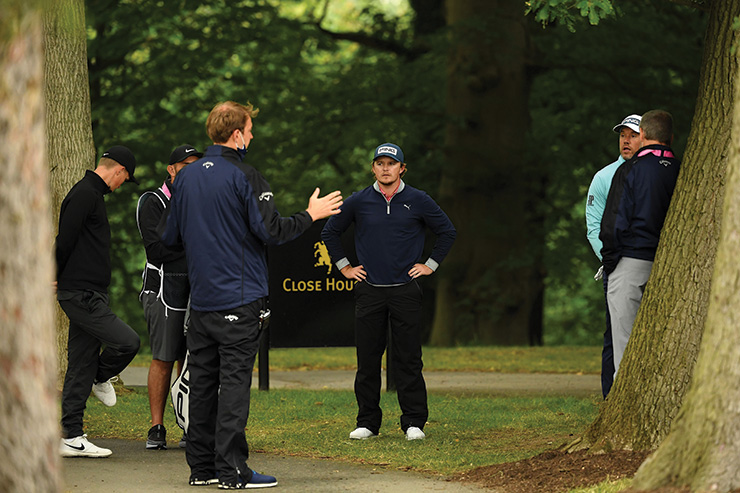 Eddie Pepperell and Lee Westwood and Swede Marcus Kinhult listen to protocol during Day 1 of the Betfred. Getty Images

The postponement of the Ryder Cup in Whistling Straits, thus pushing the next European hosting in Italy out to 2023, was a particular hammer blow for the European Tour.

As Golf Digest’s John Huggan noted in a feature that measured the financial impact of the postponement, the biennial matches aren’t “merely about pride” for the Wentworth-based European Tour. “It’s about money. Lots of money. Survival money.”

“A 12-month delay to the seven- and eight-figure windfalls the European Tour receives in the years of the event—and needs to continue in anything like its familiar form—has potentially severe implications. Especially in an economic environment that is so uncertain.”

Pelley had earmarked the challenges even before Whistling Straits was put on ice.

“The reality is, the pandemic is going to have a profound impact on the tour financially, as well as many of our partners, both in sponsorship and broadcast areas.”

There is still a feeling something has to give. Bubbles are great for keeping everyone safe but outside of the majors, high-profile (read rich) events are what motivate the world’s best. And the majority of those tournaments are now in the U.S.

Rumours of a PGA Tour takeover, which only intensified during the lockdown, continue to swirl in the background. Whether there is any foundation to the whispers remains to be seen but a continuation of the Middle East’s central role in the future of whatever new iteration of the European Tour that follows looks more certain.

With golf’s most talked about man in 2020, Bryson DeChambeau, and world No.1 Dustin Johnson among nine major champions already lured to Royal Greens Golf & Country Club for the 3rd Saudi International in February, the Kingdom’s ambitious foray into golf has again been reiterated.

There’s still even murmurs about the Saudi-backed Premier Golf League, seemingly dead before COVID and deathly quiet since, simmering away behind the scenes.

Whatever happens, the question remains whether the European Tour can survive, much less thrive, if the game’s big name players dip in and out of the season only when the big money is on offer. 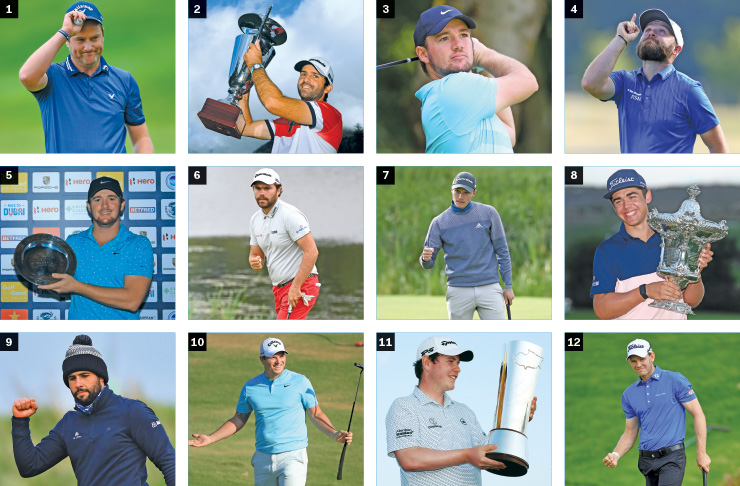 It’s a perplexing conundrum for the Wentworth brains trust although Pelley says the quirk that could see Morikawa crowned Race to Dubai champion this month despite only playing one pure European Tour event – the $8 million DPWTC finale itself – is a peak 2020 scenario.

“Collin joined the European Tour as an affiliate member at the start of the year and became a full member when he won the US PGA Championship in August. He had been looking forward to coming over to play some regular European Tour events in the summer months, but the situation this year has not allowed for that,” Pelley said.

“You probably saw his comments about coming to the DP World Tour Championship when he said how excited he is to be able to play in the Middle East for the first time so early in his career and have the chance to win the Race to Dubai. So we’re looking forward to welcoming him to Jumeirah Golf Estates and to more European Tour events next year too.”

The region is also fascinated to see how the Abu Dhabi HSBC Championship, now under European Tour control after passing from IMG, plays out too. Will the marquee names of years past return? Will there be fans? Will Muscat and Doha be tagged onto the early season Desert Swing? Will other Middle East events be added? So many questions, still so much uncertainty.

This unprecedented Race to Dubai will thankfully be decided by the players at JGE which is a win in itself given how the pandemic has changed everything. But what happens next will be the definitive play of 2020. As it was in Doha when Pelley had no other alternative but to suspend the season, you somehow suspect he won’t have all the answers straight away.

COVID is proving a formidable, relentless foe. The scramble for survival continues.