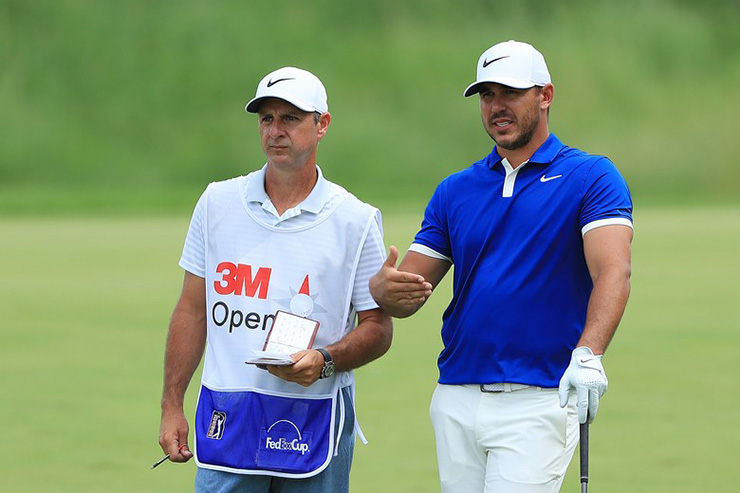 Brooks Koepka of the United States plays a shot talks with his caddie, Ricky Elliott, during the first round of the 3M Open at TPC Twin Cities on July 04, 2019 in Blaine, Minnesota. (Photo by Sam Greenwood/Getty Images)

Ricky Elliott is the hardest-working caddie in golf these days. No one else even comes close.

You’d think that goes with the territory when working for the No. 1 player in the world. And, sure, Elliott, one of the game’s best caddies and a fine golfer in his own right, is a dedicated and earnest worker for four-time major winner Brooks Koepka.

But as the 148th Open Championship nears, Elliott seems to be working for most of professional golf. Elliott is a native of Portrush, Northern Ireland. His parents’ house is about a quarter-mile from Royal Portrush, which is hosting the Open for the first time since 1951.

No one would blame Elliott for declaring, “It’s my island,” as David O’Hara did while portraying the Irish fighter named Stephen in the film, “Braveheart.”

If anyone has a question, needs a place to stay or is looking for a little insight on Royal Portrush, they go looking for Elliott, 42, who grew up playing the famed links course.

“Yeah, it’s been kind of an interesting time,” Elliott said at TPC Twin Cities, where Koepka is competing in the inaugural 3M Open. “Almost nobody has been there, so there are a lot of questions, a lot of guys looking for houses and such, where to eat. Non-stop really.”

He doesn’t mind the added attention. But being the current rock star, if you will, of the caddie fraternity makes things hectic. Case in point, he was talking to one of his caddie peers for a few minutes after Koepka shot an opening four-under 67. He turned around and there was a reporter seeking a few comments. Then Charley Hoffman tapped him on the shoulder. Hoffman is planning to arrive in Portrush next Saturday, so he asked Elliott to set him up with a local caddie for a few days until his regular caddie arrived. Elliott dutifully took Hoffman’s number. He’ll take care of it.

RELATED: John Daly, upset his request to use cart at Open Championship was denied, plans to play Royal Portrush anyway

Elliott, who began as a caddie at Portrush and played in the same junior program with Graeme McDowell, is staying with his parents during championship week in the house where he grew up, meaning his own flat not much farther away is available for guests. Among those occupying his vacant home is instructor Pete Cowen.

“Mum is all worried. She was asking me what do we do about getting them breakfast,” Elliott said with a laugh. “I said, ‘Mum, relax, they can go buy their own cereal.’”

Asked about Elliott’s widening responsibilities these many weeks, Koepka figured that the less he knew the better. “I don’t pay attention,” he said. “Yeah, I guess [he’s busy]. I guess trying to figure out a housing situation, so that’s really about it, a bunch of the caddies. I’m sure he’s got enough on his plate with all of his friends back home.”

Even with all his experience at Portrush, Elliott will have his own scouting chores when he gets back. A setup for the Open Championship will be unlike anything he has seen before. There are two new holes and several new tees. And then there’s the adjustment of thinking for Koepka, the reigning two-time PGA champion.

“I have the local knowledge, which helps, but Brooks hits the ball a little differently than I do,” Elliott said with a grin. “His lines will be a lot different. It will be fun to see how he plays it.”

Elliott’s lowest score at Royal Portrush, where he estimates he has played more than 1,000 rounds in his life, is an eight-under 64. The course will play par 71 for the championship. He figures that’s a good target score for the boss.

His own target score is 50. That’s how many tickets he needs for family and friends who want to attend the championship, which is sold out. “Fortunately, I was a caddie on the United States Ryder Cup team,” he said with a smile. “I’m hitting them all up for their extras. I’m doing a lot of negotiating. I’m going to have a lot of clubs to polish once this is all over.”