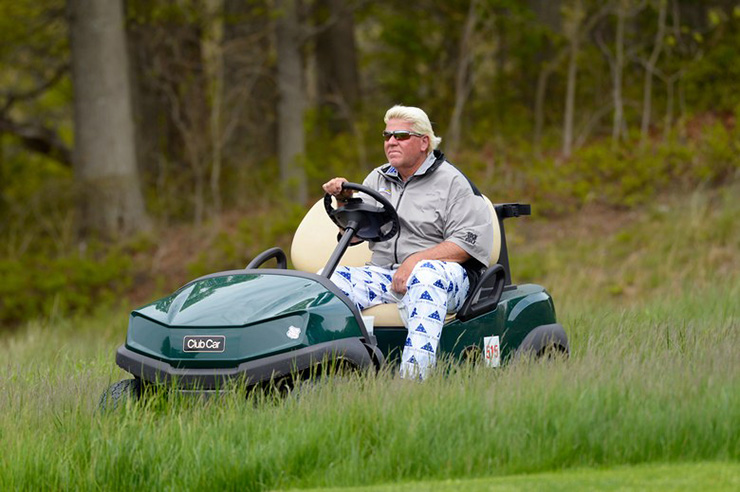 John Daly during the second round of the 2019 PGA Championship held in Farmingdale, NY at Bethpage Black on Friday, May 17, 2019. (J.D. Cuban)

By Joel Beall
John Daly will be in the field at Royal Portrush for the 2019 Open Championship. And he will traverse the venerable links on foot.

Daly, who was granted permission by the PGA of America to ride in a cart during the PGA Championship at Bethpage Black under the Americans with Disabilities Act, said on Saturday his request to ride at the Open was denied by the R&A.

“Quite disappointed they do not see it in the same way our PGA of America and PGA Tour sees it,” Daly wrote on social media. “Different continent different laws? As a proud Open champion, I know what the Open Championship represents and what a special tournament it is. I believe all who have earned the right to compete should be afforded that right to compete and give it their best shot.

“While I trust the R&A’s decision was made with good intentions, I could not disagree more with their conclusions.”

Daly wrote that a recent visit to an orthopaedic surgeon confirmed bi-compartmental degenerative arthritis in his right knee and that he will need a knee replacement.

“Before that time comes my plan is to give it a shot in two weeks at Portrush,” Daly said.

The 53-year-old’s use of a cart at Bethpage was somewhat controversial. While some believed Daly’s injury fell under disability rights, others deemed it an unnecessary sideshow. Daly was particularly upset about a jab from Tiger Woods on the subject, with the two-time major winner saying he wished Woods “had all the facts.”

“Might have been a different comment,” Daly said in response. “As well as the Golf Channel Wednesday morning, when they bashed me pretty good, and a few others [who criticized me].”

The R&A said all considerations were factored into the decision.

“The R&A believe that walking the course is an integral part of the Championship and is central to the tradition of links golf which is synonymous with the Open,” read a statement. “We must also ensure that, as far as possible, the challenge is the same for all players in the field.

“The terrain at Royal Portrush is not suited to buggies and indeed the club itself does not permit their use. We have a serious concern that some parts of the course, where there are severe slopes and swales, would be inaccessible.”

Daly’s knee problems sidelined him from the 2018 Open Championship at Carnoustie, although he was able to tee it up at Bellerive for the PGA Championship. He also withdrew from the U.S. Senior Open last year after his request for a cart under the ADA was denied. He regularly plays on the Champions Tour, which allows its players to use golf carts during competition. He has not walked in an official event since the European Tour’s Omega European Masters last fall.

Daly is in the tournament thanks to his 1995 Open triumph at St. Andrews. In 19 Open starts since his victory at the Old Course, he has made just six cuts and finished inside the top 25 once.