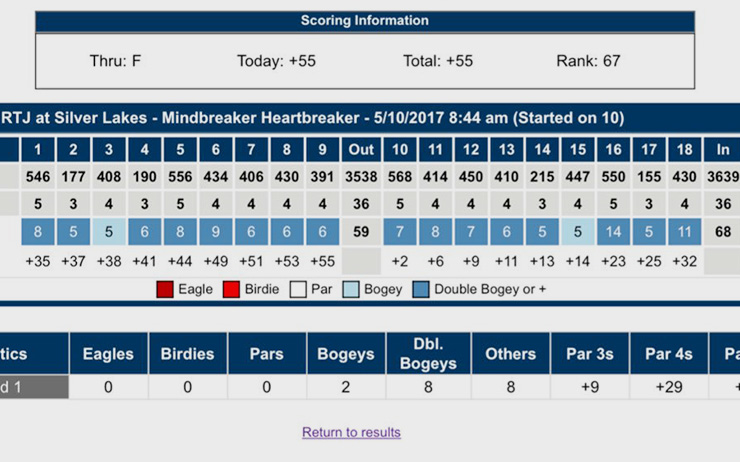 The U.S. Open is golf’s ultimate meritocracy, giving anyone the opportunity to compete with the best of the best. And like any examination, there are a select few that soar, while others come out on the business end of the battle. This story is decidedly the latter case.

Former All-American Lee McCoy advanced through local qualifying today at RTJ Golf Trail-Silver Lakes thanks to a two-under 70. But it wasn’t McCoy’s performance that caught our eye. Rather, it was this tweet regarding a fellow competitor’s score:

The scorecard of the guy that played in front of me at US Open qualifying today. Shot 68 on his front 9 and decided to finish #NeverGiveUp pic.twitter.com/zfOBJPzNfI

You may be wondering how this knucklehead found his way into qualifying. After all, the tournament requires a handicap not exceeding 1.4 under the USGA system. However, there is a loophole. If you declare yourself as a professional, you don’t need to submit a handicap, as it’s assumed you’re capable of the endeavor at hand. A proviso that’s at play here: the golfer in question — one Clifton McDonald — is not signified as an amateur on the local qualifier score board.

Which leads us to two takeaways:

— There’s the (slight) chance the poor bastard had a rough day.

Whatever the issue, props to McCoy for not letting this nonsense sidetrack his Erin Hills pursuit.