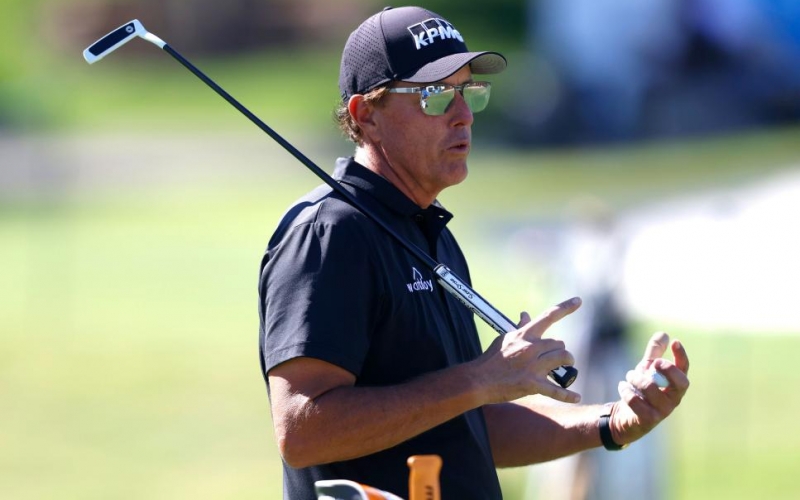 Tom Pennington
Phil Mickelson warms up on the practice green during a practice round prior to the Charles Schwab Challenge at Colonial Country Club.

By Tod Leonard
Nearly 40 years into his pro career, Phil Mickelson seemingly has very few “firsts” left to chase. The biggie, of course, is the U.S. Open victory that has painfully eluded him and denied the World Golf Hall of Famer the career Grand Slam.

But Mickelson has found new competitive life in the 50-and-older set, and he’s going to have a chance to make history next week (Feb. 26-28) in the Cologuard Classic in Tucson, Ariz., on the PGA Tour Champions. The tour announced on Friday the field of 81 in the second event on its schedule in 2021, and Mickelson tops the list of 20 major champions competing. He’s the only one, however, who can set a new tour standard. If Mickelson wins, he’ll become the first player on a PGA Tour-sanctioned tour to win his first three career starts. Let’s make this clear: No player on the PGA Tour, Champions Tour or Korn Ferry Tour has done it. Those are pretty juicy bragging rights to dangle in front of Lefty.

The return to Tucson, where the venue is Omni Tucson National, figures to provide good vibes for Mickelson. He’s already made history there once, capturing the 1991 Northern Telecom Open as an amateur while attending Arizona State. (No amateur has won on the tour since.) Tucson National shared host responsibilities that year with TPC Starr Pass, and Mickelson shot 71 in the second round.

Mickelson, who has enjoyed the senior tour’s wider fairways and friendlier hole placements, is in need of a confidence-boosting week because he’s struggled to be competitive in the current PGA Tour season. In eight starts, he’s missed the cut four times and hasn’t finished better than T-44. Mickelson is coming off what has to be a terrible disappointment—being gone for the weekend at his beloved Pebble Beach, where he shot 74 in the first round before imploding with an 80 at Spyglass Hill.

The buzz earlier this week about Mickelson, created by comments from his manager, Steve Loy, was that he might be headed for the broadcast booth in the next few years.

Bernhard Langer is the defending champion of the Cologuard, winning the event last year at the age of 62.

Believe it or not, there's actually a downside to making a bunch of cuts in a row on the PGA Tour.