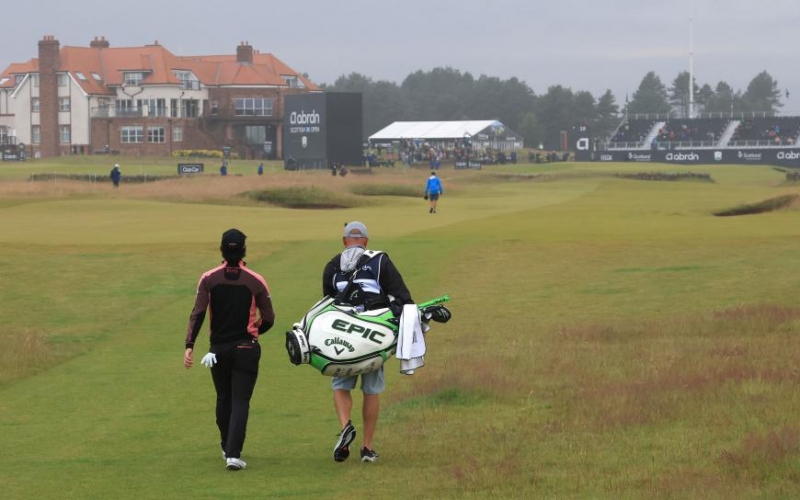 Andrew Redington
Min Woo Lee makes his way down the 18th hole during the final round of last month’s Scottish Open. In 2022, the event will be one of three co-sanctioned by the PGA Tour and European Tour.

By Daniel Rapaport and Dave Shedloski
Expansion on the European front and contraction of the World Golf Championships appear to signal an oncoming shift in the PGA Tour’s schedule dynamic.

The tour released its 2021-22 schedule of 48 events on Tuesday, and as expected, it includes the first of what could be several moves to integrate European Tour events into the lineup as the two tours further lean into the “strategic alliance” they announced in November 2020. The most significant development is the designation of three tournaments, including the Genesis Scottish Open, as co-sanctioned events that award points for both the FedEx Cup and Race to Dubai.

Meanwhile, the World Golf Championships series, introduced in 1999, has been whittled to a pair of tournaments: the WGC-HSBC Champions in China (Oct. 28-31), and the WGC-Dell Match Play Championship (March 23-27).

There have been four WGCs on the schedule since 2009: the Champions, Championship, Match Play and Invitational. The Championship has frequently moved locations but has been known as the WGC-Mexico Championship in recent years. It was moved from Club de Golf Chapultepec in Mexico City to The Concession Golf Club in Florida for 2021 due to COVID-19 restrictions. There is a “Mexico Championship” on tap for late April, location to be determined, but it becomes a full-field event and does not carry a WGC distinction.

“This is a natural evolution of the men’s professional game as it becomes more global— evidenced by today’s announcement that involves three co-sanctioned events,” PGA Tour commissioner Jay Monahan said via email. “That said, we’re fully invested in the two World Golf Championships events this season, and we will continue to work with our partners as the global game continues to evolve.”

The Invitational was hosted at Firestone Country Club in Akron, Ohio, from 1999-2018, except for the 2002 edition at Sahalee Country Club near Seattle, before moving to TPC Southwind in Memphis, where it has been known as the WGC-FedEx St. Jude Invitational. That event, to be called the FedEx St. Jude Championship, becomes the first event of the FedEx Cup Playoffs (Aug. 11-14), replacing the Northern Trust. The BMW Championship retains its spot as the second playoff event and moves in 2022 to Wilmington Country Club in Delaware. The Tour Championship at East Lake will wrap up the season on Aug. 28.

The future of the WGC series could be complicated by a Saudi-backed group’s recent investment in the Asian Tour, widely seen as the next step in an attempt to shake up the landscape of professional golf that includes a potential rival tour.

The WGCs are put on by the International Federation of PGA Tours, which includes the Asian Tour, and the PGA Tour has taken a firm stance against cooperating with groups that seek to challenge its position at the pinnacle of professional golf. In a related move, the tour, according to a report last week, indicated that it will not grant players event releases for next year’s Saudi International after the European Tour ceased to sanction it on its schedule. 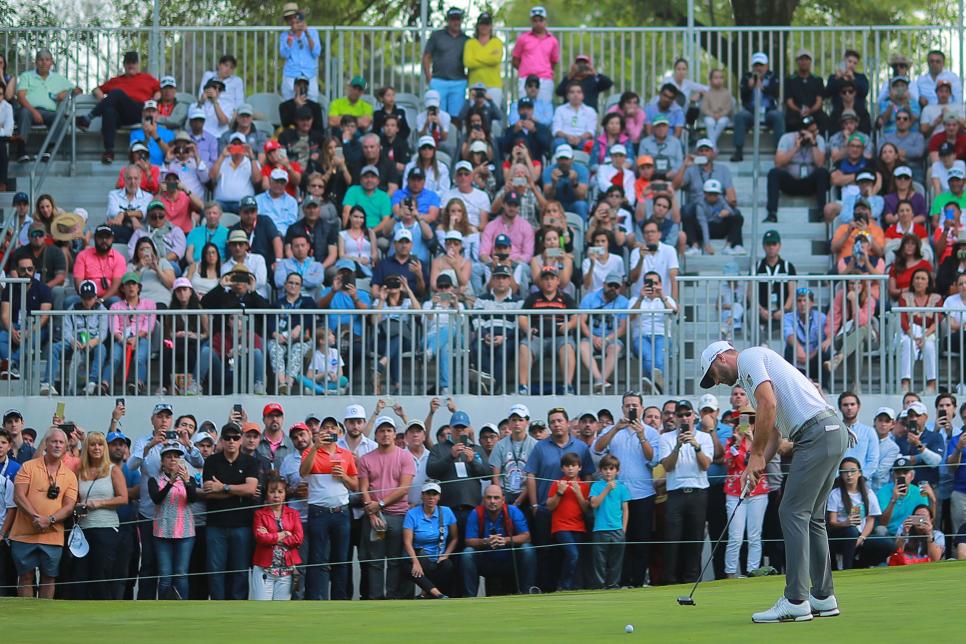 Hector Vivas
A PGA Tour event in Mexico remains on the schedule for next May, but it will not be a World Golf Championships event.

Also notable is the shift of the Puerto Rico Open, which has been played opposite a WGC since its inception in 2008. The event will be held March 3-6 opposite the Arnold Palmer Invitational in Orlando. Whether that suggests potential changes to the three invitationals on the schedule—the API, Genesis Invitational and Memorial Tournament—to a further elevated status is unknown. There is no opposite-field event lined up for either of the other two invitationals for 2021-22.

Monahan said that Puerto Rico was scheduled opposite Bay Hill “for logistical reasons,” namely convenience for players competing the previous week at the Honda Classic in Palm Beach Gardens, Fla.

The CJ Cup (Oct. 14-17) will be played in Las Vegas for the second consecutive year, with the Summit Club taking over hosting duties from Shadow Creek. The event does plan to return to South Korea in the future as the first leg of the three-tournament Asian swing. The Zozo Championship, played at Sherwood Country Club in California last year, will return to Narashino Golf Club outside Tokyo, where Tiger Woods won the inaugural event in 2019. The WGC-HSBC Champions is set to be played the week after, although rapidly evolving COVID situations could impact the status of these international events.

Furthermore, the PGA Tour is bolstering the Irish Open by contributing to a near doubling of its prize money to $6 million in 2022, though that event has yet to establish its dates or venue, nor will it be co-sanctioned.

“It’s an important first step,” said Keith Pelley, European Tour chief executive. “You’ll hear me say this over and over again—it’s a first step. There is much more to come from this alliance.” 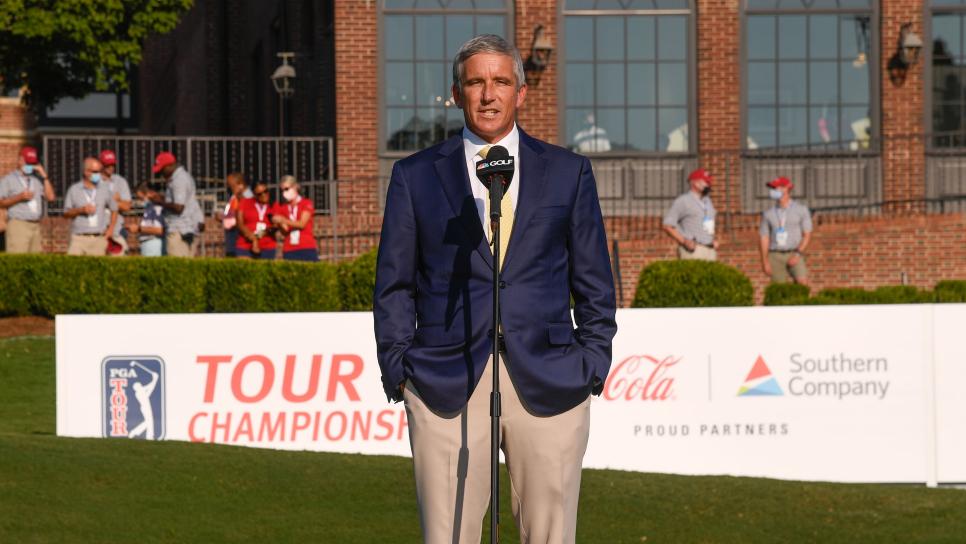 Ben Jared
Given the PGA Tour’s strategic alliance with the European Tour, Monahan noted the potential for announcements in the near future regarding the continued evolution of the PGA Tour schedule.

“Today’s announcement shows not only the growth of the game, but also how professional golf is collaborating like never before,” Monahan said. “The Strategic Alliance between the PGA Tour and European Tour has been a material, positive step forward in those efforts. … We continue to work diligently with the stakeholders in global professional golf and look forward to more announcements on that front.”

The tour’s nine-year media agreement with CBS Sports, NBC Sports and ESPN kicks in at the beginning of 2022. The deal, valued at $680 million per year, marks a 40-plus percent increase from the prior deal. CBS and NBC will continue to broadcast weekend PGA Tour events, but ESPN will take over the direct-to-consumer streaming rights and broadcast PGA Tour Live through its ESPN+ offering.

Multiple sources tell Golf Digest that more changes could be coming in 2023, including a re-examining of the tour’s wraparound schedule that’s been in place since 2013-14.

“The PGA Tour is constantly assessing how to strengthen its schedule and professional golf in the United States and around the world,” Monahan said when asked about the potential for a return to a calendar-based schedule. “As we continue to work with key stakeholders and stewards of the game, we also look forward to announcements in the near future on how our product will continue to evolve and best serve our members and fans around the world.”