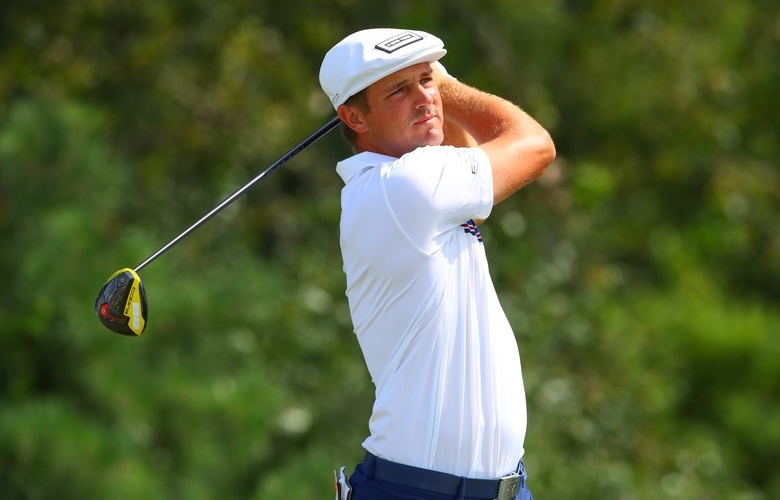 DeChambeau on the 16th tee during the final round of the Northern Trust golf tournament on August 11, 2019 at Liberty National Golf Club in Jersey City, NJ. (Photo by Rich Graessle/Icon Sportswire via Getty Images)

By Ryan Herrington
JERSEY CITY, N.J. — If you were curious what it would take for the PGA Tour to look into the matter of slow play more closely, you’ve got your answer. Try some viral videos that helped a long-brewing controversy bubble over once again.

On Sunday, the tour announced that it would explore the idea of expanding its pace-of-play policy to address players whose groups are in position but who take an excessive amount of time to hit a shot.

“We are currently in the process of reviewing this aspect of pace of play and asking ourselves, ‘Is there a better way to do it?’ ” said Tyler Dennis, the PGA Tour’s chief of operations. “We think technology definitely plays a key role in all of this and we are thinking about new and innovative ways to use it to address these situations.”

Specifically, Dennis said, the tour will try to leverage its ShotLink data to help educate players on ways they can improve on the matter.

The issue surfaced this weekend after video of Bryson DeChambeau from Friday’s second round at the Northern Trust was shared on social media showing him taking a seemingly excessive amount of time over two different shots. A torrid of critical comments, including some from fellow tour pros, followed, as well questions asking why the tour wasn’t doing more on the matter.

DeChambeau defended himself on Saturday, saying that there were extenuating circumstances in both instances.

“When people start talking to me about slow play and how I’m killing the game, I’m doing this and that to the game, that is complete and utter you-know-what,” DeChambeau said after his third round Saturday. “That’s not fair.”

DeChambeau went so far as to seek out a meeting with Brooks Koepka, who had previously criticized him for slow play, on Sunday to try to discuss the matter.

“Slow play has been a problem for a while, but it’s definitely not getting any better,” said Justin Thomas, who sits on the PGA Tour’s Player Advisory Council. “Until something’s done, it’s very, very hard. We talk about it every meeting—what we can do to make it better. It’s hard to make it better, but fair.”

Currently, the tour’s pace-of-play policy only addresses players whose groups have fallen out of position during their rounds. Players are “on the clock” when their group falls out of position and are given an allotted time between 40 and 50 seconds to hit subsequent shot. If they fail to do that, they can receive a bad time. The first bad time results in a warning, while a second bad time in the same round is a one-stroke penalty. Players are fined for a second bad time in a season, and each bad time thereafter, and for each time they are put “on the clock” after the 10th time.

“We have leveraged our ShotLink technology to provide every player with a pace of play report that they can access which breaks down the varying parts of their game and gives feedback on the amount of time on average that the player takes to hit a particular shot,” Dennis said.

But a handful of players—notably Koepka—have routinely discussed the issue as a problem on tour with the hope that their comments might help bring change.

“I just think guys are being more vocal about it,” Thomas said. “We’ve all talked about it before how slow it is, but now that people are noticing [how much of an issue it is], we’re being asked about it and we’ve been talking about what we’ve been saying to ourselves for awhile.”