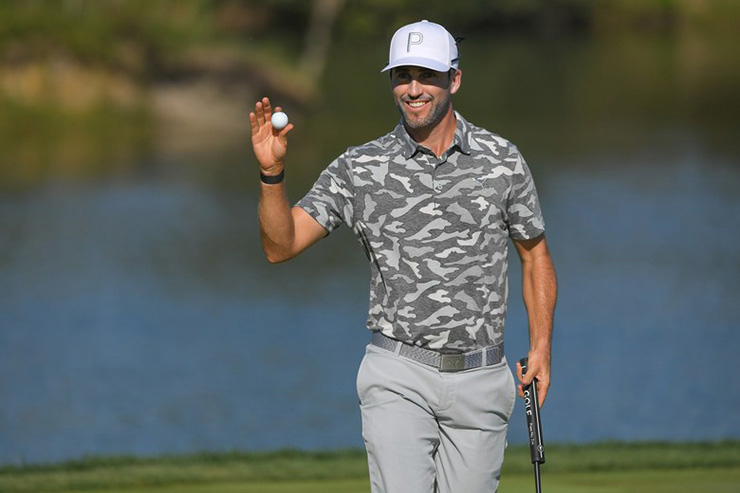 NEWBURGH, IN – SEPTEMBER 02: Chris Baker waves his ball to fans after making a putt on the 18th green to get his PGA TOUR Card during the final round of the Korn Ferry Tour Championship presented by United Leasing & Finance at Victoria National Golf Club on September 2, 2019, in Newburgh, Indiana. (Photo by Ben Jared/PGA TOUR)

By John Strege
The end of the road never shows up on a map. It doesn’t have to. Those who have reached it tend to recognize it, and in Chris Baker’s case, it was the air mattress on which he was sleeping in his parents’ motel room in Waterloo, Iowa, with his credit card debt expanding, his savings dwindling and his PGA Tour dream vanishing.

“I wasn’t broke,” he said of the moment back in 2013, “but my bank account was close to single digits. It was almost time to move on and find something else to do.” The move on was delayed only because Baker already had paid his entry fee to the Greater Cedar Rapids Open the following week.

En route to the end of his golf career and his re-entry into the real world, Baker’s life took an unexpected detour. He won the tournament. “Sitting in my office, I’ve got a Happy Gilmore check, $20,000, made out to the Greater Cedar Rapids Open Champion,” he said.

The windfall allowed him to pay bills and to provide seed money to keep his PGA Tour aspirations from expiring. The chase continued and six years later, Baker earned the elusive PGA Tour card. He finished 15th on the points list for the Korn Ferry Tour Finals Series and will make his debut as a PGA Tour member in A Military Tribute at The Greenbrier this week.

Baker, 33, finished fourth in the Tour Championship on Monday to lock up his PGA Tour membership, and his post-round celebration with family and friends closed the bar at Victoria National Golf Club. “We were the last ones out of the golf course,” he said. “The only people after us were the people cleaning up. It was completely dark. It was absolute joy and happiness and excitement. A lifelong goal.”

Making the accomplishment all the more remarkable? Baker finished an agonizing No. 26 on the Korn Ferry Tour regular-season points list, missing out on the 25th and final PGA Tour card handed out in August by 42.67 points.

Every Korn Ferry Tour graduate has a story, perseverance common to many of them. Baker spent 11 years in professional golf’s hinterlands before Broadway beckoned. He learned to dream big in towns small, starting with his hometown of Brownstown, Ind., population less than 3,000. Hence Baker’s choice of first-tee walkup song, should he ever need one: “Small Town,” by John Cougar Mellencamp, who “was born in a small town,” as the song goes, in Seymour, Ind., 11 miles northeast of Brownstown.

There is only a single golf course in Brownstown, Hickory Hills Golf Club, a nine-holer where the green fee is $9 or $14 for going around twice. Baker was 6 or 7 when the family moved to Brownstown and bought a home adjacent to Hickory Hills. “We’d just go and hang out all day,” he said. “It was very inexpensive to play. That’s what made it awesome. We had a great group of juniors from Brownstown and Seymour. The pro had some great junior golf programs. It was a great environment.”

Baker enrolled at Iowa State and was an honourable mention All-American his senior year in 2008. He won the Indiana Amateur that summer and turned professional a week later. “I found a little bit of money with some sponsors and fundraising, gave it a little shot and pursued it,” he said. Baker reached the second stage of PGA Tour Qualifying, boosting his confidence and his desire to continue, then set out for the mini-tours.

The first time his money nearly ran out, Baker finished second in an eGolf Tour event and earned in the neighbourhood of $16,000 to continue his pursuit. He joined what then was the Web.com Tour in 2011, but was unable to retain his card, the start of the lean years, 2012 and ’13. That’s when he lay on the air mattress, contemplating his future while researching on the Internet for college coaching jobs.

One of the appealing aspects of professional golf is that a single week can change a career’s trajectory. Baker’s victory in Cedar Rapids restored his confidence. He managed to rejoin the Web.com/Korn Ferry Tour in 2014 and played the tour the next six years before his promotion to the PGA Tour. (Prior to this week at Greenbrier, Baker has played in just one PGA Tour event, the 2016 Honda Classic, where he missed the cut.)

What kept him going, against prohibitive odds? “It’s just one of those things. It’s golf. It keeps you in,” he said. “They always say that one shot keeps you coming back. I enjoyed the competition. The ups are great, the downs are not great. But you just keep going. I’d gotten so close before.”

Getting to the PGA Tour is only half the equation. Staying there also has its challenges. The talent pool is deep and so is the pool of players on the periphery, seeking their turn on golf’s greatest stage.

“I know I’m ready,” Baker said. “It’s just a matter of getting there and trying to stay out of my own way and enjoying it. It’s a great opportunity. I’ve got great friends out there playing already, guys I’ve travelled with, guys I’ve played with. I’m just going to show up every time I get a chance. It’s a new season, a new schedule. I know eight opportunities [in the tour’s fall events]. I like my chances.”