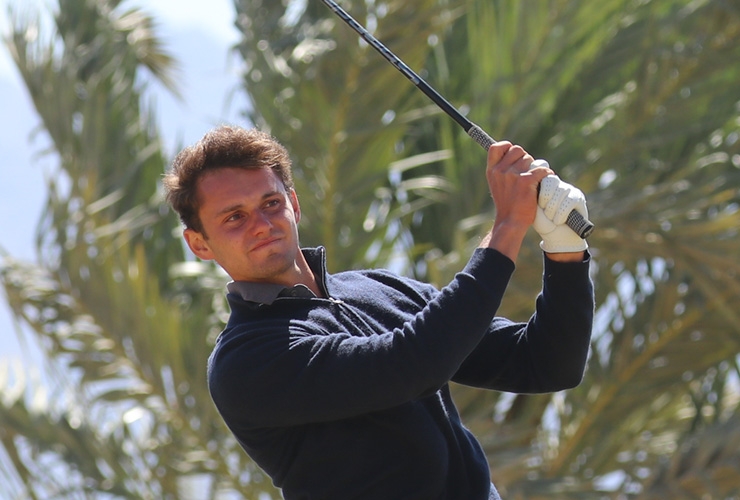 By Kent Gray
Ryan Lumsden has already qualified for a major championship, played the Eisenhower Trophy world amateur team’s championship for his adopted Scotland and has one of the PGA Tour’s premier regular-season events to look forward to later this year.

But forget the 2018 U.S. Open at Shinnecock Hills, all his past amateur exploits or even the $8.1 million AT&T Byron Nelson coming up at Trinity Forest Golf Club in Dallas, Texas from May 7-10. For now, the London-born and based Scot is focused on turning a two-stroke 36-hole lead at the Journey to Jordan #2 Championship into a MENA Tour by Arena breakthrough and his maiden professional title on Wednesday.

Just setting up the scene for Journey to Jordan #2, Round 2. The predicted 10mph wind has turned into a 25-30mph gale in the morning at @AylaOasis Golf Club. pic.twitter.com/3IdP3K2GVH

Englishman Curtis Knipes, playing in his first season as a professional, stayed in contention after an even-par 72 round which tied him for the fourth place at -3 alongside American Ben Schlottman (68), two-time MENA Tour winner Luke Joy (70) and the Swedish pair of Filip Lundell (70) and Ake Nilsson (71).

The trick for Lumsden in the final round will be getting across the line after three near misses on the regional circuit already this season, two of them at Ayla G.C.

He played the last two holes to one-over and lost in the play-off for medallist honours at Q-School in Aqaba in January. In the Journey to Jordan #1 Championship, he was one shot off the lead but signed for a closing 76 to drift out to 20th place. Last week in Bahrain, Lumsden was two-over for the last four holes to lose by two.

“I have been learning from those mistakes and trying to figure out how I can play the golf I have been playing when I am down the stretch and get over that hump and get my first win on the MENA Tour,” said Lumsden who earned his first Official World Golf Ranking points in Bahrain.

“I have been thinking about it lately. I did a much better job in Bahrain last week. My mistakes weren’t really mental out there, just a couple of good shots ending up in positions where I did not think they would. I just need to stick to the process of hitting one good shot after another.

“It’s really going to be a case of staying in the moment and not letting my head get in the way and thinking ahead. I just see it as another opportunity to figure out my stuff coming down the stretch and I see it only helping me down the line.”

For the record, Lumsden carded rounds of 82-76 at Shinnecock Hills to miss the cut by 10 shots in 2018. It was nothing to be sneezed at though – two time major champion and 2014 U.S. Open champion Martin Kaymer also finished +18 that week.

Lumsden secured his place on the Bryson Nelson by becoming the first player from Great Britain and Ireland the Bryson Nelson Award last April following a memorable stint at Northwestern University in Illinois. The coveted prize, granted by the Golf Coaches Association of America, recognised the strength of Lumsden’s entire collegiate academic (he majored in economics) and golf career. The selection panel also considered “good citizenship”, something that Nelson, a five-time major winner and sixth on the all-time PGA Tour list with 52 triumphs, was renowned for over the course of his life and golf career.

Ryan Lumsden is a Scotsman and spent 4 years playing college golf in the Windy City at @NUGolf_Live.

No wonder then that the 23-year-old battled well against the high wind at Ayla to post a bogey-free 69 and take a two-shot lead in the J2J #2.

Overnight leader Mitch Waite, meanwhile, started in sensational fashion by making an eagle on the par-4 10th hole after driving the green, but four subsequent bogeys dropped him to solo ninth place at two-under-par.

The race for the Trophee Hassan II start on the European Tour is still on between Journey to Jordan Order of Merit leader David Langley and second-placed David Hague. Langley made the cut on the number, while Hague was tied 34th and would need to finish inside the top-10 depending on his rival’s finish.

The cut was applied at nine-over par with 49 professionals and one amateur, Dubai-based Indian Arjun Gupta, proceeding to the final round.