PGA Championship 2017: The winners & losers from Day 2 at Quail Hollow 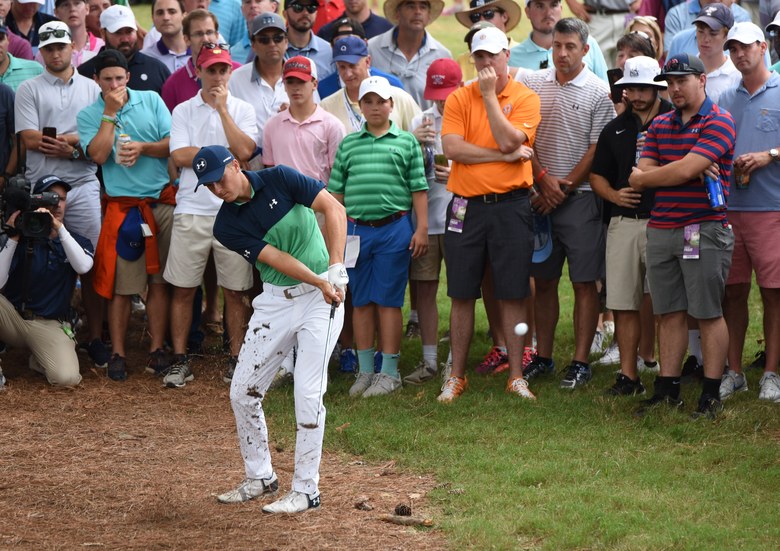 Icon Sportswire
CHARLOTTE, NC – AUGUST 11: Jordan Spieth hits an iron out from a natural area on the 10th hole during the second round of the PGA Championship on August 11, 2017 at Quail Hollow Golf Club in Charlotte, NC. (Photo by William Howard/Icon Sportswire via Getty Images)

By Alex Myers
Area storms caused an hour-and-40-minute delay during Day 2 at the 99th PGA Championship and led to an exciting finish as players raced — literally — to finish their rounds. And we’ll race through Friday’s highs and lows with our latest edition of winners and losers.

Last week’s winner at the WGC-Bridgestone was making the biggest move of anyone until play was suspended on Friday afternoon. Matsuyama was five under through 14 holes and. . . the break did nothing to cool him off. He returned to the course to birdie No. 15 and play the “Green Mile” in one under to post a 64. The World No. 3 who is in search of major title No. 1 has a 36-hole (co-)lead at one of golf’s four biggest events for the first time. At 25, we’re guessing it won’t be the last.

Another day, another disappointing round for the guy trying to become the sixth player to complete the career Grand Slam. Spieth putted better on Friday, but his irons — the strongest part of his game this season — let him down as he lost nearly a stroke to the field. There was also a wild drive right (we’ve heard that before recently) that sent him on a pine straw adventure resulting in a bogey on the par-5 10th. This time, Spieth didn’t respond with a burst of brilliance, dropping one more shot on his way to a 73 that has him at three over and trailing by 11 shots heading into the final two rounds. If he’s to get into the record books this weekend, then he’ll also have to pull off a historic comeback.

With a second consecutive 67, the Kiz grabbed a share of the 36-hole lead at Quail Hollow, putting him in the best position he’s ever been to win a first major. Not that that’s saying much for a guy who has never had a top 10 in a major. But Kisner has established himself as one of the most consistent players on tour and he enters this week at No. 9 on the FedEx Cup points list and with nearly $4 million in earnings. Not bad for someone who thought about quitting the game and was embarrassed to play practice rounds with other tour pros just four years ago.

With four bogeys in a five-hole stretch, McIlroy played himself from in contention to nearly out of the tournament. But he rallied late and was this close to finishing his second round with three consecutive birdies:

Still, it was the latest round in which some jaw-dropping ball-striking didn’t translate to a low score as McIlroy signed for a second consecutive 72. It could have been worse, though, if he didn’t make the most entertaining par save of the day:

McIlroy, Spieth both currently +2, 10 back of leaders. No player has ever won the PGA when trailing by double-digits after 36 holes.

It’s been a disappointing season for Day, but he could change that with one tournament, and Friday might have been the one round that provides the spark. Beginning with a tap-in eagle on the par-5 7th, Day went five under over a four-hole stretch until play was halted. When it resumed, he bogeyed the 11th hole, but then added a couple birdies to shoot 66 and pull within two shots. For whatever reason, the PGA Championship suits the Aussie. After winning the tournament for his first major in 2015 he finished runner-up last year. In other words, don’t expect the former World No. 1 to go away. As for the current World No. 1, however. . .

Confounded by Quail Hollow’s new greens, DJ shot a 74 to drop him to two over. That means that we are two rounds away from what seemed inconceivable heading into the Masters: Dustin Johnson, a man who won three consecutive tournaments earlier this season, likely won’t win a major in 2017. Remember, kids, nothing is a sure thing in life. Oh, and be careful walking down stairs in rental houses.

The Italian matched Matsuyama with a 64 himself to vault up to T-4 following an opening 73. Molinari’s best major finish was a T-9 at the 2013 British Open, but he has four career European Tour wins and he’s one of the game’s best iron players. With Quail Hollow’s greens playing so firm — excluding the couple hours after the rain delay — that has played into his hands.

Following the worst score of his PGA Championship career, Mickelson played better on Friday, but still badly missed the cut for a second straight major. The most unusual part of Phil the Thrill’s performance was the lack of thrills, as he failed to make a birdie in his first 30 holes and wound up with just one in two rounds.

Phil Mickelson +11 and now 27 holes into the #PGAChamp without a birdie. Inexplicable.

The bigger picture bad news for Mickelson is that he’s currently 17th on the Presidents Cup points list, meaning his fate of representing the U.S. for an incredible 23rd consecutive Presidents Cup or Ryder Cup will probably be in the hands of captain Steve Stricker — and assistant captain Tiger Woods.

With no chance of making the cut, these two pros sacrificed their final-hole tee shots for the good of their groups — and themselves — by hurriedly hitting so they wouldn’t have to wake up early on Saturday just to play one hole. Willett hit an iron off the tee so that his group could finish, and Pampling did, well, whatever this was:

That bad weather forecast finally caught up with the tournament on Friday afternoon with a lengthy suspension of play. Not that this type of thing is unusual when it comes to the PGA Championship:

Six years in a row this has happened at the US PGA. They need to find a golf course with a roof.

Or maybe they should move the tournament to another month, like, say, May. Has anyone thought about that yet?