PGA Championship 2017: Kevin Kisner laments losing chance to ‘run away’ from field: ‘I’m in a dogfight’ 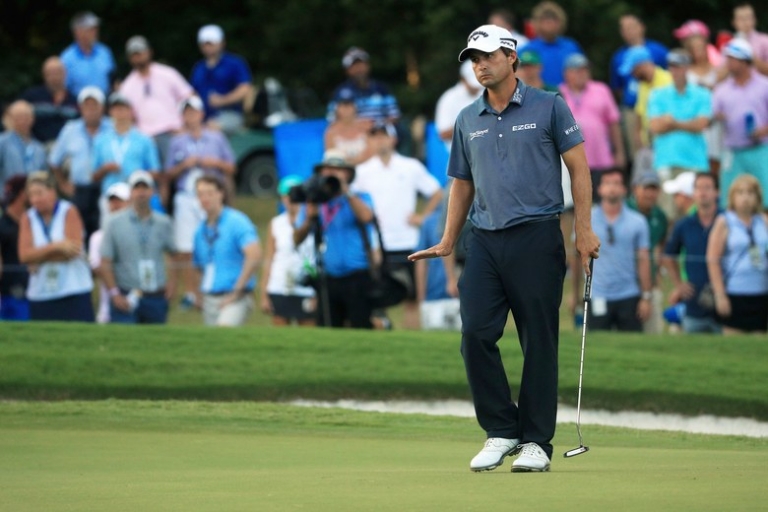 Kevin Kisner reacts to his putt on the 18th green during the third round of the 2017 PGA Championship at Quail Hollow Club. (Photo by Mike Ehrmann/Getty Images)

The disappointing look on Kevin Kisner’s face walking off the 18th green Saturday at Quail Hollow Club was the first time all day that the 33-year-old showed any emotion. Going double bogey/par/bogey to close out a one-over 72 hadn’t cost him the lead at the PGA Championship, but it changed the narrative with 18 holes to play.

“I’m happy I’m in the position I’m in,” said Kisner, still one stroke ahead of Chris Stroud and Hideki Matsuyama at seven under, and two shots clear of Justin Thomas and Louis Oosthuizen. “[But] I had a chance to run away from guys and take people out of the tournament that were four or five, six back, and I didn’t do it. Now I’m in a dogfight tomorrow, and I have to be prepared for that.”

On a muggy day where the pace of play was slow and the scoring difficult, Kisner remained eerily unflappable. A birdie on the seventh hole helped him turn in one under. It wasn’t until the par-4 12th that he finally stumbled, hitting a rare errant drive and making his first bogey since six holes into his second round.

Impressively, Kisner bounced back with birdies on the 14th and 15th to get to 10 under and take control again before facing the most challenging moment of the entire championship. With his ball in the left rough on the par-4 16th, he overcooked his approach, pulling it into the water left of the green. The double-bogey 6 hurt, but wasn’t as painful as could be given that the rest of the names atop the leader board were also struggling to close out their rounds.

While giving another shot back on the 18th when he pulled his approach left, the ball bounding off a stone bridge before burying in the Bermuda rough, and failing to get up-and-down for par, Kisner was just happy the score wasn’t higher.

“I was pretty perplexed with what I was going to do with that chip shot,” Kisner said. “It was the worst lie I had seen all week, downhill lie. I was just trying to do anything to get it over that creek. … I was trying to figure out how the heck I could make 5 and get out of here. Don’t want to be there tomorrow for sure.”

Kisner’s flat-line demeanor remains as impressive as his ability to handle the treacherous Quail Hollow course, a layout he has become familiar with recent visits this summer. But don’t be fooled by his nonchalance. It doesn’t mean there isn’t a lot of heart-pounding going on inside.