PGA Championship 2017: What Justin Thomas needs to do on Sunday to win his first major 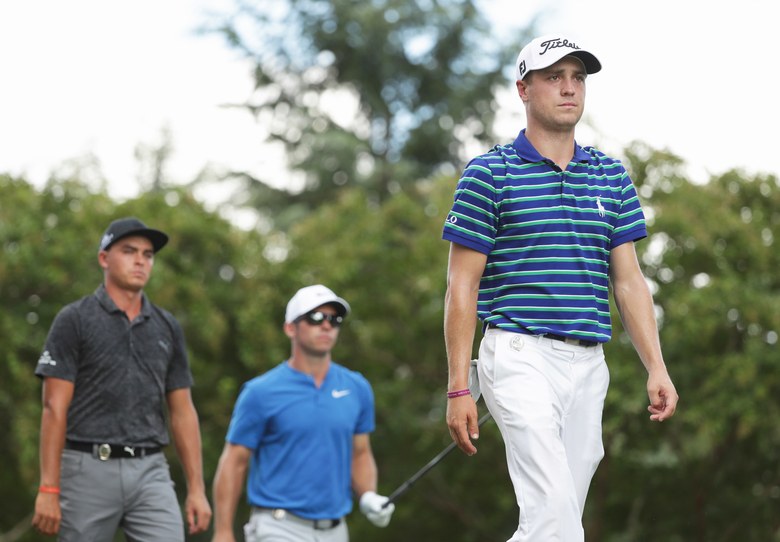 By Brian Wacker
Earlier this year Justin Thomas entered the final round of the U.S. Open just a stroke off the lead of Brooks Koepka. Thomas bogeyed three of his first five holes, Koepka birdied his first two and, well, that was that.

Sunday, Thomas enters the final round of the 99th PGA Championship just two back of leader Kevin Kisner, playing in the second-to-last group with Hideki Matsuyama.

“Just patience,” Thomas said of what he learned from the first experience that he thinks will help him in the second.

It’s such a cliché. Golf and its players are full of clichés. Thomas isn’t full of patience. What 24-year-old is?

What Thomas is full of, though, is game. He’s long off the tee and one of the game’s better ball-strikers. He has already won three times on the PGA Tour this season and four times in his career. He shot 59 in Hawaii in January and 63 at the U.S. Open.

Thomas’ style of play also runs contrary to patience, with his swing-out-of-his-shoes move with the driver and an all-out approach with his irons.

But he certainly has the talent to win a major championship. Why not now? Especially considering of the top 15 players on the leader board, only one (Louis Oosthuizen) has done so before.

More important than patience, will be how Thomas handles himself when things go sideways, because, at least based on the first three rounds at Quail Hollow, they will at some point (see: Kisner, Kevin, whose crash-and-burn finish befitting the nearby Motor Speedway included a double bogey and a bogey over his final three holes of the third round).

Saturday was a good example of what can be when Thomas can control his game—and himself—while things aren’t going as planned.

Thomas struggled off the tee, hitting just six of 14 fairways (though some of those were just off the short grass) and his iron play, despite 14 greens hit, wasn’t as crisp or controlled as he knows it needs to be if he’s going to hoist the Wanamaker Trophy on Sunday. So much so that after his third-round two-under 69 he headed straight to the range in the encroaching darkness to figure out why he wasn’t able to dial up his reliable fade on demand.

The session was brief, maybe 15 minutes, and it helped put his mind in the right place.

That he made four birdies and just two bogeys on a day in which he bogeyed his opening hole and could’ve gone off the rails quickly perhaps was a step in the maturation process of his game.

RELATED: Chris Stroud travels from oblivion to major contention … in a week

Golf has long been about minimising the mistakes more than rounds of 59 or 63 (his third-round tally at the U.S. Open), particularly in the throes of a white-knuckle major championship.

“I don’t like to think that I stole one,” Thomas said of his third round. “I like to think that I’m mature now and I can manage an under par round when I don’t have my best stuff. I think that’s why I feel like I’m ready to win a major championship now versus last year, I probably didn’t have that. Because you are going to have a day, usually at least a day in the tournament, where you don’t have your best.

“That’s what Tiger did so well. He won tournaments by five or six with his B game or C game. It’s about managing it around here, trying to get it around. What I did [Saturday] was definitely a confidence boost.”

So too should his performance on the back nine the last two days, playing it in a combined five under with five birdies and no bogeys. Major championships are often won or lost over the closing nine, and with two of the course’s three par 5s on the back, Thomas’ confidence should only grow even more.

But Thomas’ fate will more likely be tied to how well he handles whatever miscues await.

“I had a really bad break on Sunday on [the fourth hole] and I think that flustered me a little bit,” Thomas said of this year’s U.S. Open. “I just didn’t handle it very well.

“Hopefully it doesn’t happen [at Quail Hollow]. If something like that happens, I think I can handle it a little better.”