PGA Championship 2017: The winners & losers from Day 3 at Quail Hollow 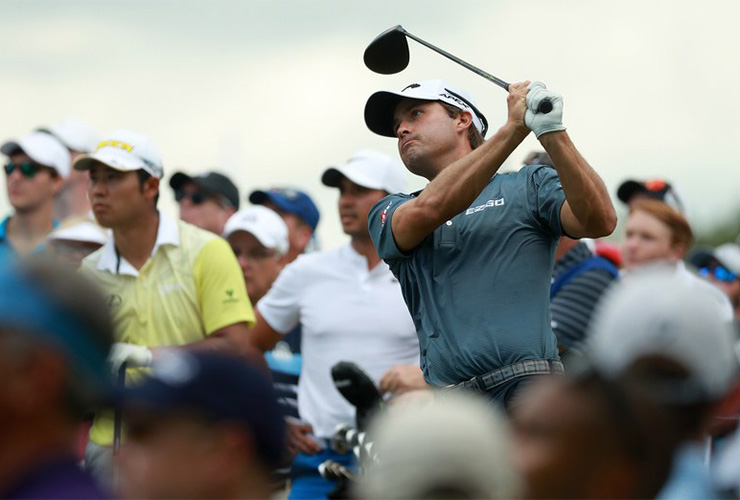 Moving Day at the 99th PGA Championship grinded to a halt as par became everyone’s friend at a tough Quail Hollow. But there were still plenty of things to talk about, including a Cinderella story and two shots involving trees — one jaw-droppingly difficult and another jaw-droppingly dumb. Let’s get to it all with our latest edition of winners and losers.

The Kiz played his final three holes in three over — and needed a lucky bounce off a bridge or it would have been worse — but if you start a round tied for the lead and you end it in first place by yourself, it’s a good day. Playing in the final group with World No. 3 Hideki Matsuyama and former World No. 1 Jason Day, Kisner looked at ease. And as he goes for his first top-10 finish at a major, let alone his first victory, he’ll tee it up with a slightly less intimidating figure in the final pairing on Sunday. Speaking of. . .

REMINDER: Less than a week ago, this guy had no plans of even playing in this event. But he got in with his first PGA Tour title in his 290th start at the Barracuda Championship and is he ever taking advantage of this unexpected opportunity. Stroud shot 71 to move up to T-2 heading into the final round. And if you expect him to go away on Sunday, well, you’ll probably be proven right. But just remember that crazier things have happened at this tournament, most notably John Daly getting into the PGA even later than Stroud in 1991 when he won as the ninth alternate.

After a shaky start, the Aussie rallied with three consecutive birdies on 14-16. But threw it all away on the final two holes, lowlighted by a quadruple-bogey 8 on 18 when he made one of the most curious choices you’ll ever see on his second shot. The hole was to the left. Jason went to the right.

This was a very tough spot for Jason Day. pic.twitter.com/IY5vtAKabK

Jason Day my man what are you doing?

Quad on the last costing himself at least a shot at it tomorrow #PGAChamp pic.twitter.com/Sr38K7uTId

Oh my heart hurts. And I am melting. Golfffff. 🔥😭

It’s going to be a long night in the Day’s motor home. However, there was one guy who got out of a similar jam. Twice. . .

Golf fans are familiar with the South African’s silky smooth swing, but on Saturday, Oosthuizen showed how creative he can be when it comes to ball-striking. Check him out doing his best contortionist impersonation to hit another green in regulation:

From there, it almost didn’t even matter how Oosthuizen played. That’s how good that shot was. But he did play pretty well, shooting 71 despite getting treatment for his forearm after that miracle shot, and needing to have his 8-iron replaced at one point. And on 18, in a similar spot to where Day would be moments later, Oosthuizen pitched out to the fairway (SENSIBLE!) and got up and down for a par that kept him at five under.

If you’ve watched even an hour of TV coverage this week, you’re probably sick of hearing about Quail Hollow’s “Green Mile.” But Fowler showed why the course’s difficult closing stretch gets so much hype. Lurking in great position to win a first major, Fowler arrived on the 16th hole at five under. He walked off the 18th hole one under, making it look likely that his major pursuit will have to wait until next year.

But it wasn’t all bad news for the #SB2K17 crew on Saturday. Jordan Spieth shot 71 and Thomas shot 69 to get to within two shots of Kisner’s lead. It’s the second time in the past three majors that JT has booked a late tee time on Sunday. But outside of him winning his first major, it’s the one member of the Baker’s Bay Boys who isn’t at the PGA who had the best week, because Smylie Kaufman got engaged. And he dropped down on one knee and everything.

This will forever be my favorite fairway! I can’t wait to marry you, Smylie Kaufman! #fairwayfinds

After clearning that up for eagle, he added another eagle on 15 and then made a long birdie putt on 16. The six under stretch vaulted him to T-10 entering the final round. “When that putt went in [on 16], one of those things, you shake your head,” DeLaet said after. “It was pretty unreal.”

After making the cut on the number, Scott got a reprieve that he squandered on Saturday with a 74. And with the Aussie, currently ranked No. 61 on the FedEx Cup points list, planning on missing the first two playoff events for the birth of his second child, that likely means Sunday will be the last round of a disappointing year in which he didn’t record a single top-five finish. Not in a major, but anywhere. Not good.

The final group teed off at 2 p.m. They finished at 7:40 p.m. Yes, there was Jason Day’s adventure on 18, but still, FIVE hours and 40 minutes to play a round of golf? “I’ve seen pro-ams that are faster than this,” CBS’ Jim Nantz said. That’s probably the meanest thing Jim Nantz has ever said, but he speaks the truth. Pick it up, guys.