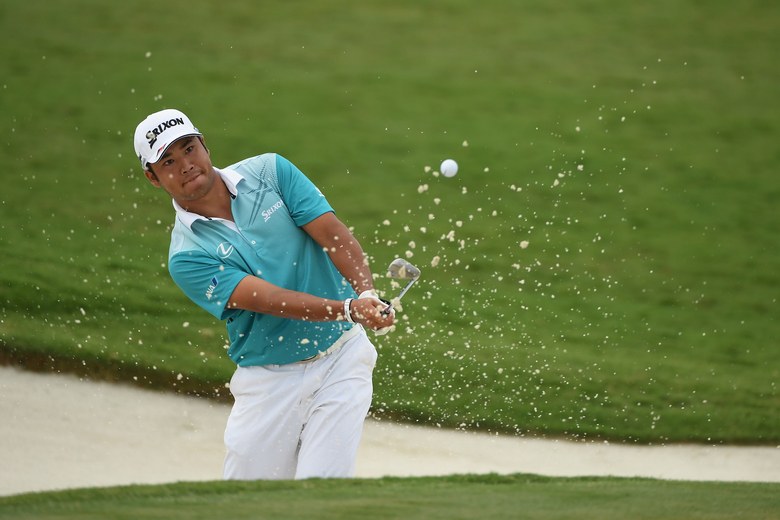 By Christopher Powers
Last week at the WGC-Bridgestone Invitational, Hideki Matsuyama closed out the tournament with a final-round, course-record 61, and made it look easy. He came back to earth Thursday at the PGA Championship, which by his standards was posting a one-under 70 at Quail Hollow Club. On Friday though, the world No. 3 returned to his Firestone form, carding a bogey-free seven-under 64 to tie Kevin Kisner for the lead at eight-under 134.

Matsuyama, 25, was quietly lurking at three under for the championship through 11 holes of his second round. Then, he skyrocketed up the leader board, making four consecutive birdies beginning at the par-4 12th, and added one more on the par-3 17th to post a five-under 31 on the back nine. Matsuyama’s seven birdies all came within 11 feet thanks to some precise iron play, which should come as no surprise – he ranks 12th in strokes gained: approach the green on the PGA Tour.

He’s already one of the most accomplished Japanese golfer ever, but is still looking to become the first from his country to win a major championship. A win this weekend would be the sixth of his career, and the third this season.

Kisner, 33, posted a second consecutive four-under 67 that featured an eagle, three birdies and a bogey. The South Carolina native is proving he has what it takes to compete in majors, something he’s struggled with in his career, registering just two top-25s in 11 starts. Winning at Quail Hollow would be the crowning achievement of what’s already been a career season.

RELATED: A rebuilt swing has Kevin Kisner ready for his major moment

Finishing his round in the darkness was Jason Day, who carded a five-under 66 to get into solo third at six-under 136. Through six holes the 2015 PGA Champion was seven back, but struck an eight iron from 184 yards out on the par-5 seventh to three feet for a kick-in eagle. He heated up from there, making five birdies and just one bogey on his way in. It’s not been the best season for the Aussie, but that could completely change with two more solid rounds on the weekend.

Italy’s Francesco Molinari and South Africa’s Louis Oosthuizen are just three back at five-under 137. Also at five under is Chris Stroud, but he still has five holes to play.

Jordan Spieth (three over) and Rory McIlroy (two over) will play the weekend, but both will need a strong finish to capture the Wanamaker Trophy.