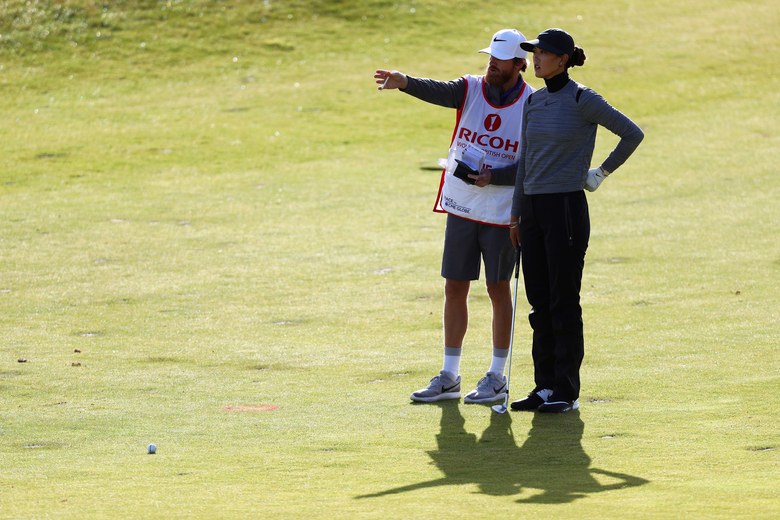 By John Huggan
Predictably, Michelle Wie enjoyed her early morning stroll around the picturesque links of Kingsbarns out there on the East Neuk of Fife. Opening the Ricoh Women’s British Open with an eight-under par 64—a new course record for the 17-year-old Kyle Phillips design— will do that, of course. Making nine birdies wasn’t too shabby either, especially after an ugly bogey at the par-5 second hole, the result of a skulled lob-wedge from the “perfect” lay-up spot, that turned out to be nothing more than a false alarm.

Indeed, that early dropped shot was merely the harbinger of greater things ahead. And lots of “fun.” Such was her peace of mind, the 27-year-old Hawaiian even had time to take in the stunning vistas across the “ocean” that is actually the indeterminate border between the Firth of Tay and the North Sea known as the Tay Estuary.

“It’s so gorgeous here,” Wie said. “When the weather is nice, it almost felt like I was playing back home in Hawaii with the views and everything. I feel like I got extremely lucky with the conditions out there.”

Maybe, but no one else was going quite so low or making quite as many birdies. The first of the nine appeared at the 399-yard fourth and two more were on the card before the turn. At which point the floodgates sprang apart. Six more red numbers translated into a back-nine 30 and an early three-stroke lead over England’s Mel Reid that was soon enough usurped by I.K. Kim’s 65.

RELATED: How a team of Aussies turned a talented Korean golfer into the new World No. 1

Ever the iconoclast, Wie compiled her unprecedented round in a manner best described as “eccentric.” While conventional wisdom has it that lon irons are generally more useful on a links than lofted woods, the former U.S. Women’s Open champion made good use of both a 9-wood and an 11-wood that have been in the bag since the KPMG Women’s PGA Championship in June. Three of her nine birdies resulted from approach shots struck with those two clubs.

“Callaway has done a great job of accommodating me,” said Wie, looking only slightly embarrassed. “They had to look back into their archives to find me an 11-wood. I’ve never played such high-lofted woods before. The 11-wood goes 180 yards, the same distance as my 5-iron, and is a lot easier to hit than a blade. The 9-wood replaces my 4-hybrid and goes 190-195 yards, although maybe not that far in these conditions.”

Perhaps just as important for Wie as she goes about trying to win for the first time since that Women’s Open at Pinehurst in 2014 is the fact that she is fully fit. A troublesome neck strain caused her to withdraw from this year’s Women’s Open in the second round last month, but all is well after a 19th-place showing last week at the Aberdeen Asset Ladies Scottish Open.

“I hurt my neck the Sunday of KPMG,” she said. “I hit one shot and started getting neck spasms. I didn’t hit a single golf ball until the U.S. Open. I was doing everything I could—three physio treatments a day—but it just wasn’t enough time. The spasms were pretty bad. But I got to see my doctors in New York City after that, got a couple injections, and I feel pretty good.”