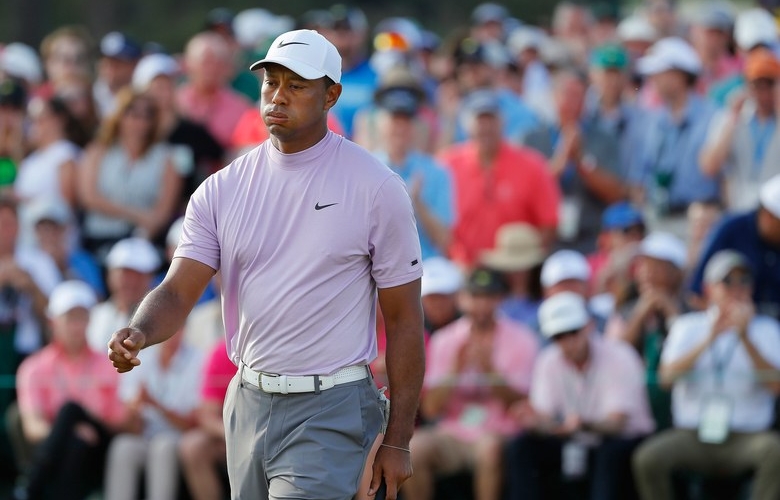 Kevin C. Cox/Getty Images
Tiger Woods reacts on the 18th green during the third round of the 2019 Masters.

By Kent Gray
Tiger Woods’ remarkable victory at the Masters tournament last month has been the promotional gift that has kept on giving for the PGA of America, doubling down on the excitement already generated by the rescheduling of its annual showcase from August to the middle of May.

Sadly, it appears fans across the Middle East won’t get a chance to watch live television coverage of the world No.6’s bid for a 16th major title at the 101st PGA Championship from fearsome Bethpage Black this week.

The opening round of the year’s second major begins at precisely 2.45pm UAE time on Thursday but as of this morning, there was no confirmation of live TV coverage for Middle East fans left in a state of viewing flux since OSN controversially jettisoned all but two cricket channels from its sports offering on April 1.

Facebook came to the region’s rescue last month, LIVE streaming the U.S. television feed as Woods marched to a fifth green jacket and closed to within three wins of Jack Nicklaus’ record of 18 major championship titles.

However, it seems the best Middle East viewers can hope for this week is the featured group and press conference coverage being promised on the PGA of America’s website, PGA.com, from 4pm. You can find the streaming coverage here.

There will also be coverage of the closing 16th, 17th and 18th holes at Bethpage Black on the PGA Championship mobile app although this only appears available to viewers who download the app and can authenticate one of two U.S. TV service providers; TNT and CBS are simulcasting their televised broadcasts online.

Here’s the PGA.com streaming schedule for the four rounds of the PGA Championship: