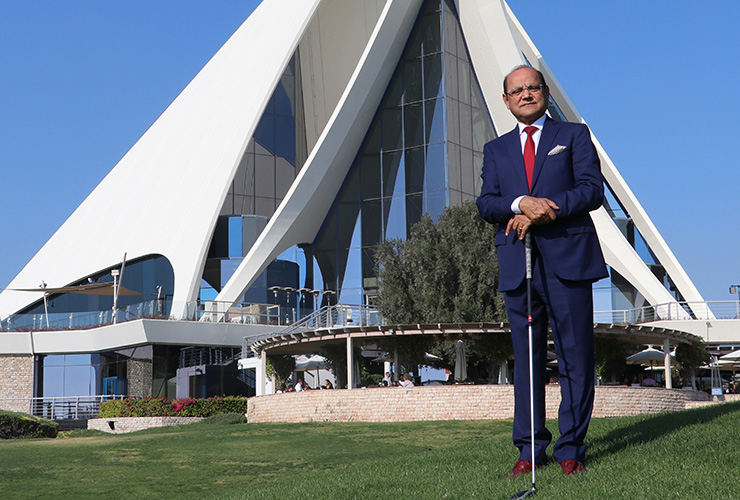 By Kent Gray
A world-first league promising amateur golfers weekly Ryder Cup-style matches with all the trimmings of a professional tour – including live broadcasts – has been launched in Dubai.

The Emirates Amateur Golf League (EAGL), golf’s answer to IPL cricket with an intriguing reality TV twist, is the brainchild of Sudesh Aggarwal who revealed the concept at an unveiling party at Dubai Creek Golf & Yacht Club on Wednesday evening.

Aggarwal hopes to find nine-team owners willing to pay six-figure sums for the franchises (the first eight sold will contest the inaugural season) which will comprise 24-player squads managed by two non-playing coaches, likely to be contracted UAE PGA members. Any amateur – male or female – with an official handicap of 14 or better can register to be part of a franchise, each of which will compete in a round-robin – with 12 players selected for each match – before semifinals and a grandfinal.

The season, scheduled to run over two months from late November to early January, will include a total of 312 matches with three to four courses in addition to Dubai Creek set to host matches if Aggarwal’s plans come to fruition. The matches will be contested in various matchplay formats in handicap bands –  0-4, 5-8, 9-11 and 12-14 – off the stick.

Aggarwal is even promising 40 hours of live online coverage in the first season via the EAGL’s social networks. Plans to broadcast the action on a mainstream TV network are on-going – Dubai TV filmed the unveiling party. At the very least, the APGC has reportedly agreed to promote the league across its network of 42 member nations, a vast audience for franchisees who are also being promised “extensive opportunities for branding, hospitality, networking, entertaining clients and PR.”

“The Emirates Amateur Golf League is the most exciting thing to happen to amateur golf, which is the largest segment of the sport,” Aggarwal said.

“We all know the excitement generated by team golf competitions like the Ryder Cup and the Presidents Cup, and the drama that a sporting league like the English Premier League in football or the Indian Premier League in cricket can create. The EAGL combines the best of all these mega sporting events. We aim to provide an unforgettable experience for the players and sponsors through professional organisation and creating value propositions which will make this a win-win situation for all our stakeholders.”

“We have so many amazing tournaments for the professionals in the UAE but we rarely get something which gets the amateur players excited,” Shaikh Fahim said. “The EAGL can become a tournament our amateurs will aspire to become a part of, and hence work harder to get better.”

One of the franchises has been named after APGC chairman Taimur Hassan, Pakistan’s best known professional.

“It’s really heart-warming to see tournaments like the Emirates Amateur Golf League being conceptualised,” said Hassan. “At the APGC, increasing the popularity of golf and improving the quality of amateur golf is at the heart of everything we do. We are delighted to support the EAGL.”

For more on the EAGL, be sure pick up (or download) a copy of the February 2021 edition of Golf Digest Middle East, out soon.