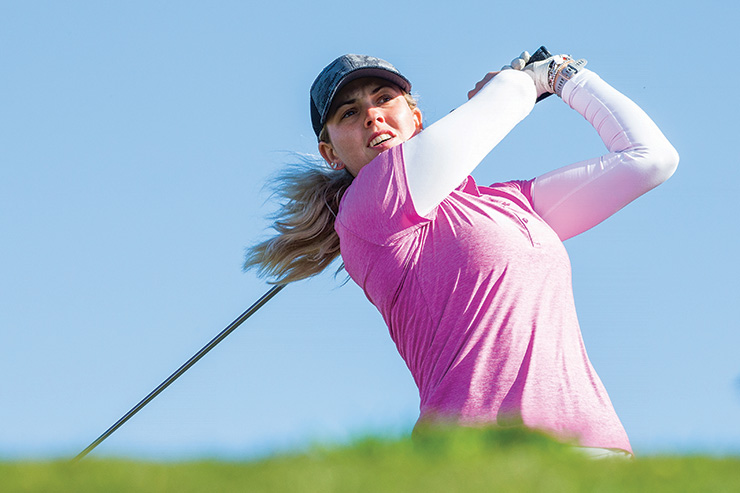 The world will be watching when the Ladies European Tour makes its debut in Saudi Arabia this month. For keen followers of the game in the Middle East, the performance of Alison Muirhead will be an intriguing sub-plot in the ground-breaking story.

By Kent Gray
When the inaugural Saudi Ladies International was announced in mid-December, Alison Muirhead never entertained being part of the field, much less being eligible for a share of the $1 million purse at the trailblazing Ladies European Tour (LET) event.

Well outside the top 500 in the World Amateur Golf Ranking at the time, the Johannesburg-born, Dubai-domiciled and Jumeirah Golf Estates-attached Scot was still a relatively unheralded talent.

Even as her power game started to translate into more and more top 10s at elite European events – seven in all last year – and, eventually, in victory at November’s Panoramica International Women’s Open Championship in Spain, Muirhead hadn’t committed to taking the pro plunge. That all changed just before the LET’s two-stage Q-School in January.

“I had worked hard on my game and as my results continued to improve it just seemed to be the right time at the beginning of 2020,” says the 21-year-old.

The 11th hour decision proved an inspired one. Muirhead advanced to the final, five-round stage of Q-School at Real Golf La Manga Club with medallist honours from the Pre-Qualifier at the same Spanish venue a week earlier. Clearly oozing with confidence, she negotiated the nerve-jangling finish stage with scores of 69-67-77-70-71 to finish T-2 on -7, just three shots behind experienced Welshwoman Amy Boulden.

Now, a month after her LET debut at the season-opening Australian Ladies Classic, Muirhead is fizzing to tee it up at Royal Greens Golf & Country Club from March 19-22 in a tournament set to be broadcast to an estimated television audience of 340 million across 55 countries.

“It is very exciting,” said Muirhead who moved to Dubai when the business her father worked in relocated to the emirate in 2006.

“I have never been to Saudi despite having lived in the Middle East for a long time but I watched last month’s [Saudi International on the men’s European Tour] at Royal Greens.  I like the look of the course and am excited to play it.

“I am still coming to terms with having a full LET Tour Card, it has all been a little surreal to be honest. But slowly the reality is sinking in. I hope to play well enough through my rookie season to retain my card.”

Muirhead was introduced to the game by her father and, for the past 12 years, has been coached by Mark Gregson Walters. She sprung to prominence locally when she captured the 2015-16 Emirates Golf Federation Ladies Order-of-Merit title.

“[The EGF competition] was a great beginning but then I needed to play three and four round competitions which included the Faldo Series and various amateur competitions in Europe to further develop my game to where it is today,” said Muirhead who did her final years of schooling at Dubai English Speaking College.

From her earliest introduction to the game on driving ranges, Muirhead liked giving the ball a belt with her driver, something Gregson Walters has embraced and honed with the help of strength and conditioning coach Alan Walters.

“I have always been a long hitter and we have worked to keep that as a strength by becoming straighter. But to score well when you are long, it results in you being closer to the greens so you have to become very good with your wedges to be rewarded. I always work to improve my wedge game and it has been showing in my performance.

“The facilities at JGE have also been great for training and with two championship golf courses it has been a tremendous help. I have also had great support from all the staff especially the MD, Ismail Sharif.”

Muirhead missed the cut at her LET debut in Bonville by two strokes but knew beforehand that she was on a steep learning curve. One course where she will feel at home is the Faldo for the OMEGA Dubai Moonlight Classic in early November.

“My family have been members of Emirates G.C. since we arrived in Dubai and that is where I started to play golf. I moved to JGE when my coach became Director of the ETPI facility, now the Peter Cowan Academy.

“It is amazing to have a chance to play as a professional in a competition in my adopted home on a course that I have played many times. Last year I was travelling and competing in amateur competitions at that time [the Moonlight Classic was in May but has been moved to Nov.] so was unable to have any involvement. I can’t wait.”

Like Muirhead, the Saudi Ladies International is all about new beginnings for Golf Saudi, a fresh platform to proudly trumpet a message of inclusion and equality to an emboldened domestic audience and the wider world.

Majed Al Sorour, the CEO of the Saudi Golf Federation and Golf Saudi, certainly makes no bones about the importance of the 72-hole strokeplay event to help deliver on the Kingdom’s ‘Vision 2030’ socio-economic plan through golf.

“At Golf Saudi we are looking for equality and that’s why we reached out to the LET in order to host this tournament,” said Al Sorour.

“Women should be able to compete on their own platform and that is why we focused on the prize money for the inaugural Saudi Ladies International. We felt past amounts weren’t sufficient and that is how we came up with the decision to make it $1 million. We wanted to send a message to our women and our daughters that we are looking for equality and golf can be a vehicle to achieve this.”

Muirhead is not alone in being grateful to jump on board for the ride.