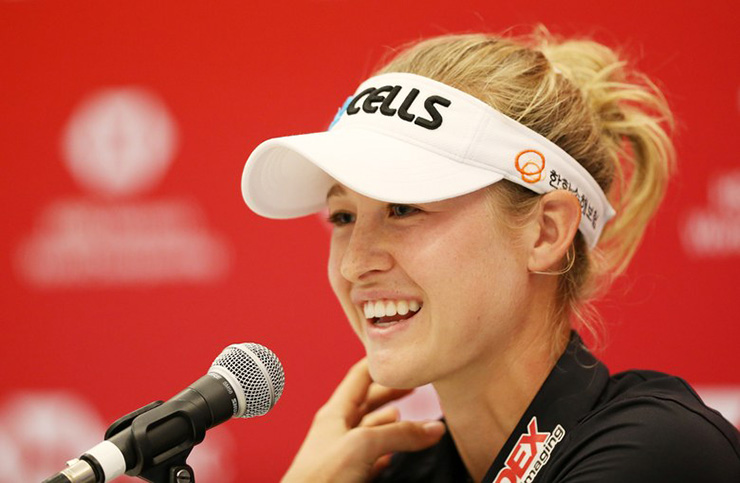 SINGAPORE, SINGAPORE – FEBRUARY 27: Nelly Korda of the United States speaks to the media during a press conference prior to the HSBC Women’s World Championship at Sentosa Golf Club on February 27, 2019, in Singapore. (Photo by Lionel Ng/Getty Images)

By Keely Levins
Nelly Korda is coming into her own. The 20-year-old’s play of late has solidified her as the top American female golfer, as she officially passed Lexi Thompson on Monday in the Rolex World Rankings. Korda is No. 6 in the latest ranking, and Thompson is No. 9. Korda’s older sister, Jessica, is the next-highest ranked American at No. 12. Nelly moved up two spots after finishing T-2 at the Bank of Hope Founders Cup, one shot behind winner Jin Young Ko. Thompson did not play the event.

Nelly’s rise has been steady after having made her first big appearance in the U.S. Women’s Open in 2013 as a 14-year-old. She made the cut as an amateur and finished T-64. After turning pro at age 18 in 2016, she played a full season on the Symetra Tour, winning once and qualifying for the LPGA Tour for the 2017 season. She had five top-10 finishes in her rookie campaign, and then a year later claimed her first LPGA Tour win at the Swinging Skirts LPGA Taiwan Championship last October.

Nelly has played five events so far in 2019 and has finished in the top 10 in each, including a win at last month’s ISPS Handa Australian Women’s Open.

As for why Nelly is having her strongest season to date, one stat jumps out: She’s ranked No. 1 in greens in regulation. That’s a stark improvement from her No. 27 ranking in the same stat in 2018, and being ranked 95th in the category in 2017. Giving herself all of those birdie opportunities has resulted in a jump in another key stat for Nelly, as she’s No. 1 in birdies in 2019.

Another valuable aspect of Nelly’s game that can’t be quantified is her determination. “My parents always refer to me as the lion because I just, you know, I see something and I go after it. I’m always pretty determined,” Nelly said in a press conference in February. “So I’ve always kind of had that aspect, but I think just playing so much competitive golf, even at a young age, it kind of builds it.”

The friendly, healthy rivalry between the sisters is sure to further fueled by Nelly becoming the top American.

“She’s one up on me [in wins] this year, so I got to put my butt in gear,” said Jessica of competing with Nelly, while at the Bank of Hope Founders Cup. “It’s been so great watching her. Just not being able to play, to be out here, just seeing how she carries herself and how she represents herself has been fantastic.”