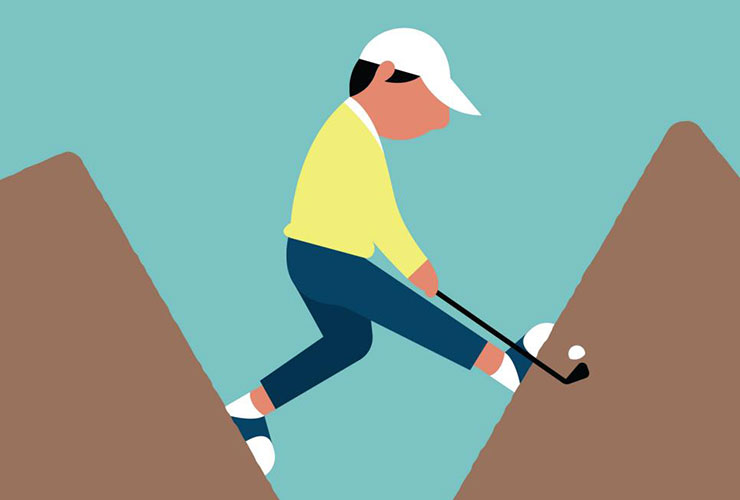 By Drew Powell
Patience is a word often thrown around in our game. Perhaps no situation tries our patience as much as the couple of weeks after greens have been aerated. As golfers, we know punching those tiny holes and filling them with sand is a necessary evil, but do we really know why it’s necessary?

To better understand this essential practice, we talked to Phil Cuffare, the Director of Agronomy at Oakland Hills Country Club in Bloomfield Hills, Michigan. Cuffare is tasked with maintaining championship-level conditions at both courses at Oakland Hills, including the famed South Course, which has hosted six US Opens (as well as three PGA Championships and the 2004 Ryder Cup).

“The main reason is organic matter build-up,” Cuffare says about the need to aerate greens. According to Cuffare, a layer of organic matter — consisting of decaying roots, grass stems and other plant material — tends to build up over time where the grass stems meet the soil. When that layer gets too thick, water gets trapped at the surface, causing greens to be too soft. Additionally, excessive organic matter buildup can prevent root growth and reduce oxygen levels in the soil.

“What it does is it allows water infiltration and oxygen, so you get a healthier plant,” Cuffare says of aeration. “You get a tighter plant. And then the water is not being held up in the inch or two or three in the profile, so that top two or three inches can get drier and firmer, faster.” 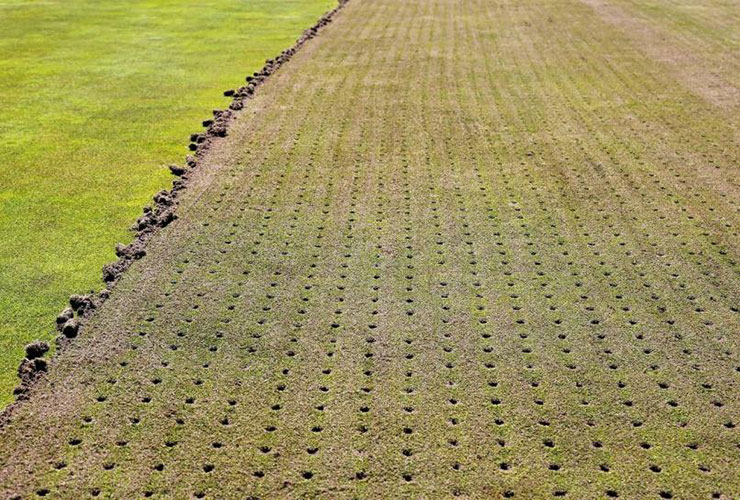 Courtesy of the USGA

Dry, firm and fast greens are all part of the laundry list of expectations that we place on our superintendents. But without aeration and healthy greens, those conditions are not achievable, Cuffare says.

“You want greens that are rolling 12, 13 or 14 [on the stimpmeter] on a daily basis with rock hard conditions?” he says. “Well, you have to have a healthy plant to do that. You can’t perform to those standards and expectations with an unhealthy turf plant.”

Even knowing that maintaining proper turf health requires regular aeration, we often agonise over its timing. The dreaded punching and subsequent sanding — which Cuffare says provides a channel for roots to travel and fills the holes with new, healthy material — often comes as the greens are reaching their peak condition.

“I would argue just as the greens are getting good, we’re aerifying them,” says Cuffare, who notes that Oakland Hills — set to host the US Open in 2034 and 2051 — typically follows a mid-April and early-October aeration schedule. Though the timing can aggravate golfers, Cuffare says that the good weather that produced the smooth greens in the first place is the same weather needed for greens to promptly heal after aeration.

“I’d say it’s two to three weeks, in that typical timeframe,” he says of how quickly greens will fully recover after aeration. “The springtime aerification can take a little longer just because of the inconsistency in weather. Typically, we see a fall aerification heal right along because the soil temperatures are already elevated.”

Those two or three weeks of healing in the spring and autumn, we know, can be the most frustrating times of the season for golfers. Despite our common critiques as putt after putt gets knocked off line, aeration is unavoidable, Cuffare says. In fact, he believes it’s the most important practice when caring for greens.

“Yeah, absolutely. 100 per cent,” he says of whether aeration reigns supreme. “The single-most important component to growing grass is oxygen. It’s just like for humans, the anatomy of a grass plant is the same as the anatomy of a human, right? If I cut off your O2, what happens?”

It’s an analogy that may help us be a little more patient as we wait for our punched greens to recover. If it’s any consolation, not only is aeration a necessary evil for golfers, but Cuffare says it’s a practice that superintendents take little satisfaction in, too.

“We absolutely hate doing it because it usually requires very long days,” he says of superintendents punching greens. “We work long days as it is, but it’s brutal. I would say the only time I enjoy aerification is when I know that we’re in desperate need of it, and we’re rehabilitating some stuff. I enjoy the benefits of it. We’re in the people-pleasing business, we don’t want to dissatisfy people.”