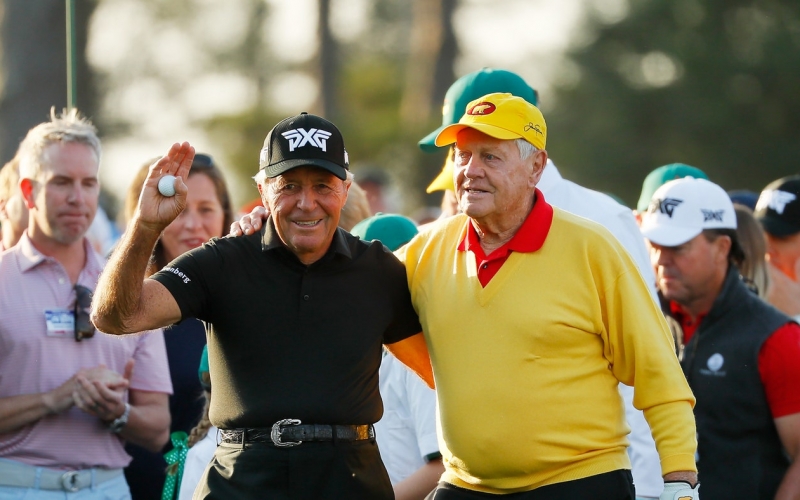 By John Feinstein
According to the weather report, the temperature in Augusta at 7:45 on Thursday morning is supposed to be 70 degrees, rising to a high of 85 by mid-afternoon.

If the world was a normal place right now, thousands of people would be preparing to pack around the first tee at Augusta National Golf Club to get a close look at Jack Nicklaus and Gary Player as they walk onto the tee to take part in one of sport’s sweetest rituals.

Fred Ridley, Augusta National’s chairman, would introduce the two—Nicklaus, a six-time Masters champion; and Player, a three-time winner. Each would have warmed up, wanting to be sure they were loose enough to get their only shot of the 2020 Masters as far down the fairway as possible.

None of that will happen Thursday. Augusta National will be empty the way virtually every sporting venue—hallowed or not—is empty.

This would have been Nicklaus’s 11th year as an honourary starter and Player’s ninth. It has been the two of them alone on the tee since 2017. In 2016, Arnold Palmer was there but didn’t hit a shot. Nicklaus said later that at the Champions Dinner the previous night, he had tried to talk Palmer into taking a swing.

“I said to him, ‘Arnold, if you putt the ball off the tee, everyone will love it,’ ” Nicklaus said, adding, “He said he has some balance problems.”

Palmer had been an honourary starter since 2007—going at it solo for three years before Nicklaus and then Player were invited to join him. He sat on the tee that day in 2016, wearing his green jacket and, with a little help from Nicklaus, stood to acknowledge the cheers when then-club chairman Billy Payne introduced him.

When Nicklaus was introduced, he looked at his longtime rival and friend and had to wipe tears from his eyes. “I don’t know whether I’ve got tears or I’m just old,” he said. 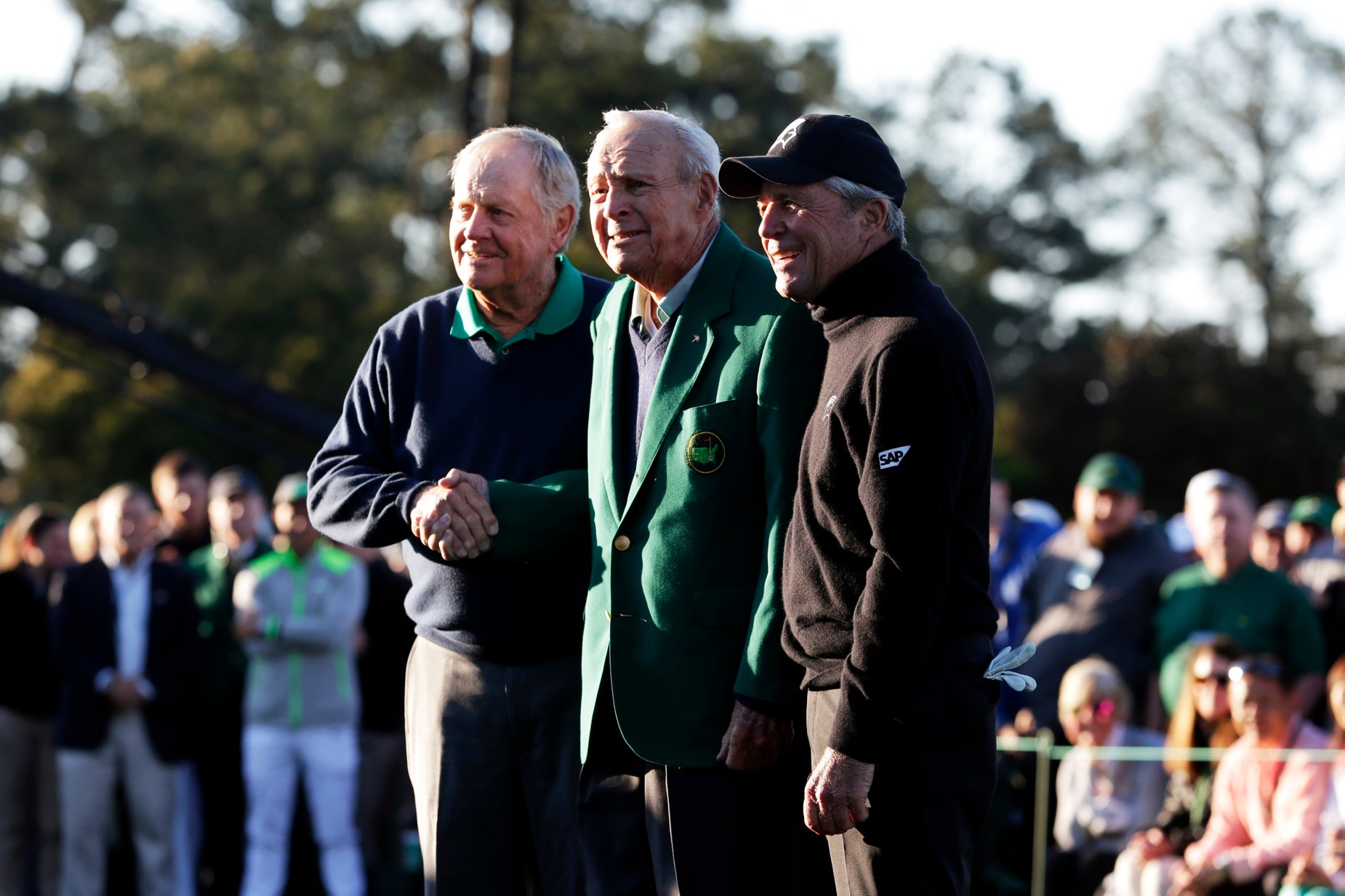 Clearly, the tears had nothing to do with his age. Five months later, on the eve of Ryder Cup week, Palmer passed away soon after turning 87.

The tradition of honourary starters at Augusta dates to 1963, when Jock Hutchison and Fred McLeod were asked to hit opening tee shots to start the tournament. Neither was a Masters champion, but Hutchison had won the first Senior PGA Championship, in 1937, and a year later McLeod won the second. Both those tournaments were played at Augusta National.

The two men shared the first tee until Hutchison, then 89, stepped aside in 1974. McLeod continued on alone through the 1976 tournament, taking his final swing at 93. A month later, he passed away.

Although the ceremonial tee shots are referred to as “an annual tradition,” there have been years when no one hit a shot before the actual start of the tournament.

After McLeod’s death, there were no ceremonial starters for the next four years. In 1981, Gene Sarazen and Byron Nelson were asked to become honourary starters. Nelson was a two-time Masters champion, and Sarazen’s one Masters victory, in 1935, featured “the shot heard round the world,” his 235-yard 4-wood on the 15th hole that found the hole for a double eagle.

In 1984, Sam Snead joined Sarazen and Nelson, and the three of them made the opening tee shot an important part of every Masters. Sarazen often provided highlight moments, not only with his ability to get the ball down the first fairway well into his 90s, but with his willingness to add to the chairman’s recitation of each player’s resume. When then-chairman Jack Stephens introduced Sarazen in 1994 as “a Masters, U.S. Open and British Open champion,” Sarazen said, “You forgot the PGA—I won the PGA three times.” The number of people on earth who could get away with publicly correcting an Augusta National chairman can usually be counted on one hand with fingers to spare. Stephens cracked up.

Sarazen was 97 the last time he teed it up, in 1999, and he died a month later. Nelson continued through 2001, leaving Snead as the sole swinger in 2002. Like McLeod and Sarazen, Snead died a month after his last ceremonial swing. One can’t help but wonder if each man pushed himself to make it to Augusta in April one last time.

After Snead’s death, there was another four-year gap with no starter until Palmer took over in 2007. There has been one fill-in starter: In 1983, Nelson couldn’t attend the tournament because his wife was ill, and he asked Ken Venturi to stand in for him.

Player is 84 and Nicklaus is 80. The hope is that both men will be part of the opening ceremony for many years to come. But because the Masters is the Masters, there are those who wonder who might be next in the line of succession.

Tom Watson, a two-time champion, turned 70 last September. There were some who thought the club might ask him to join Nicklaus and Player this year, but Watson recently said he didn’t think he was “worthy” of joining Nicklaus and Player. Chances are good the club will, at some point, disagree with him.

The other prime candidates in Watson’s generation to someday be starters are two-time champion Ben Crenshaw, who is now 68, and three-time champion Nick Faldo, who is 62.

Even though there have been years in the past without a starter, it seems unlikely the club will let that happen again. It is a tradition unique to the Masters and one that everyone clearly enjoys.

One thing that is almost certain: Sometime from 2040-‘45, longtime BFFs Tiger Woods and Phil Mickelson will be asked to be the starters. They will hit their tee shots and then—as all the honourary starters do—they will come into the media centre to reminisce.

There is no doubt they will both talk about how the media exaggerated their differences dating to the long-ago 1990s. “Nothing to it,” they will say. “We always got along.” (For the record, Mickelson has already said this to me.)

My fondest wish is that I somehow live to witness that if only to tell those too young to remember that nothing could be farther from the truth For now, though, with everyone in golf keenly aware of the silence coming from Augusta National this week, all we can do is look forward to the honourary starters, and the Masters, on Nov. 12.