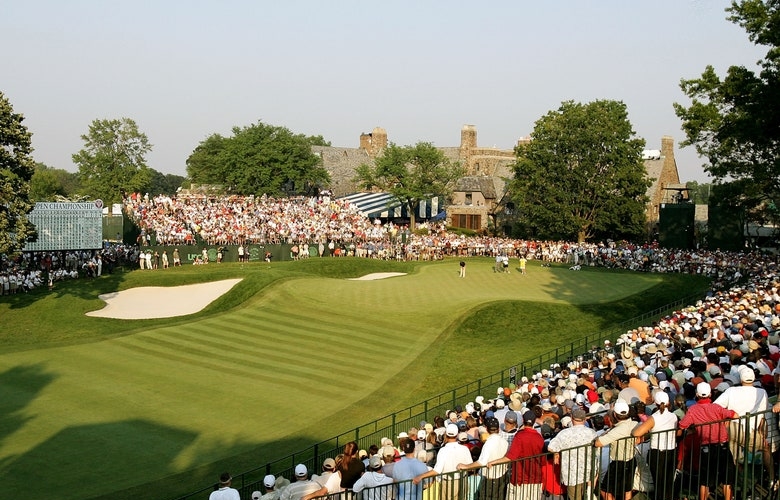 Richard Heathcote
Colin Montgomerie putts on the 18th green during the final round of the 2006 U.S. Open.


By Joel Beall and Brian Wacker
A new proposed golf schedule will move three of the game’s majors into the late summer and autumn, with the cancellation of the sport’s oldest tournament.

Augusta National Golf Club, the European Tour, LPGA, PGA of America, PGA Tour, R&A and USGA issued a joint statement on Monday, outlining the framework for golf to eventually be played in 2020.

The U.S. Open, previously scheduled for June 18, is now moving to Sept. 14-20. The tournament remains scheduled to be played at Winged Foot in Westchester County, N.Y., one of the hardest American areas hit by the COVID-19 pandemic.

“We are hopeful that postponing the championship will offer us the opportunity to mitigate health and safety issues while still providing us with the best opportunity to conduct the U.S. Open this year,” said Mike Davis, CEO of the USGA. “We are incredibly thankful to the membership and staff at Winged Foot for their flexibility and support. We are also grateful for the wonderful collaboration among the professional tours and other majors in working through a complicated schedule.”

As Golf Digest reported last week, the Open Championship has been cancelled. R&A chief executive Martin Slumbers said in a statement, “I can assure everyone that we have explored every option for playing the Open this year, but it is not going to be possible.” This is the first time the Open has been cancelled since World War II.

The PGA Championship, postponed from its May 17 date at TPC Harding Park in San Francisco, will move to Aug. 6-9. The PGA of America also confirmed its Ryder Cup remains in its originally slotted date of Sept. 25-27 at Whistling Straits in Kohler, Wis.

The PGA Tour is moving its regular-season finale, the Wyndham Championship, and three FedEx Cup Playoff events one week later, starting the week of Aug. 10 and concluding with a Monday, Sept. 7 finish for the Tour Championship. The Tour also will work to reschedule tournaments into the weeks formerly occupied by the U.S. Open, British Open and men’s Olympic golf competition in June and July. The Tour said it will make further announcements about this potential, as well as its fall schedule, in the coming weeks. How the regular Tour schedule shakes out is still to be determined, but according to multiple sources a potential scenario being discussed could look something like this:

• Play will resume at Colonial Country Club for the Charles Schwab Challenge. Still currently scheduled for May 21-24, the tournament could be pushed back to June 11-14. The RBC Canadian Open is currently slotted for that week but might have to be cancelled or postponed because of a Toronto order that all major city events and event permits have been cancelled through June 30 because of the coronavirus.

• With the U.S. Open postponed until September, that week will be filled by another tour event, possibly the Rocket Mortgage Classic (still slated for May but potentially another event that will need to be pushed back) or the RBC Heritage, which was originally scheduled for the week after the Masters.

• The Travelers Championship (June 25-28) and John Deere Classic (July 9-12), meanwhile, will maintain their dates on the schedule, according to sources familiar with those events, as will the WGC-FedEx St. Jude Invitational (July 2-5).

The Masters, as Golf Digest previously reported, will move to the week of Nov. 9. It will be the first Masters held outside of April since 1934.

“In collaboration with the leading organisations in golf, Augusta National Golf Club has identified November 9-15 as the intended dates to host the 2020 Masters,” said Augusta National chairman Fred Ridley in a statement. “While more details will be shared in the weeks and months to come, we, like all of you, will continue to focus on all mandated precautions and guidelines to fight against the Coronavirus. Along the way, we hope the anticipation of staging the Masters Tournament in the fall brings a moment of joy to the Augusta community and all those who love the sport.

“We want to emphasise that our future plans are incumbent upon favourable counsel and direction from health officials. Provided that occurs and we can conduct the 2020 Masters, we intend to invite those professionals and amateurs who would have qualified for our original April date and welcome all existing ticket holders to enjoy the excitement of Masters week.”

Due to the many complexities involved, the European Tour said it is currently working through scenarios regarding the scheduling of tournaments in 2020 and will have an update “in due course.” On Friday, the LPGA released its new schedule, with a target return date of June 15.

It should be stated that the schedule remains dynamic as the pandemic could still be in its beginning stages. Over the weekend California Governor Gavin Newsom was pessimistic about his state, set to stage the PGA Championship, holding sporting events with spectators by September after President Donald Trump made comments wishing to see fans return to stadiums by August.

“I’m not anticipating that happening in this state,” Newsom said. “I’m not here to second-guess anybody, but I am here to say this: Our decision on that basis, at least here in the state of California, will be determined by the facts, will be determined by the health experts … and having the appropriate community surveillance and testing to confidently determine whether that’s appropriate.”