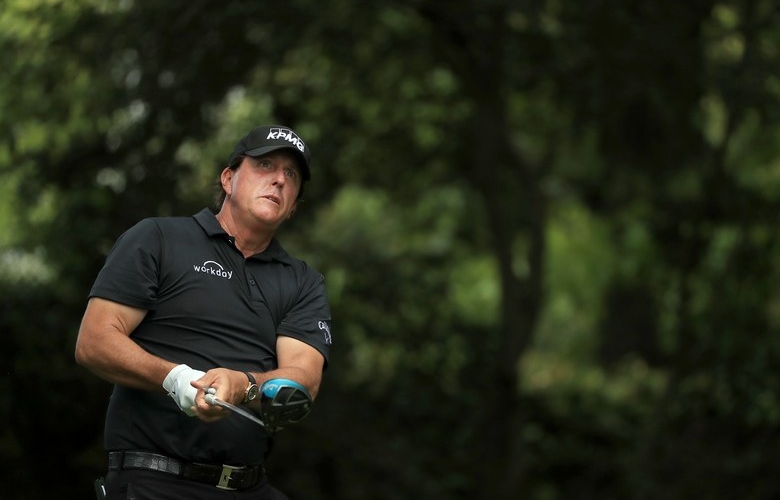 By Alex Myers
Even for the often unpredictable Phil Mickelson, Sunday morning took a wild and unexpected turn. It wasn’t so much a matter of What will Phil do next?, but rather, What will happen to Phil next? as the five-time major champ was forced to evacuate from his hotel ahead of the final round of the BMW Championship.

Mickelson took to Twitter—apparently, he grabbed his trusty iPad on the way out—to relay the news. According to Mickelson, he was without his clubs and clothes and in danger of missing his Sunday tee time:

How’s this for crazy? My hotel was struck by lighting, I was on top floor,we were evacuated and the place is on fire(only thing of mine on fire this week.) I can’t get back into my room and may miss my tee time because I am without clubs and clothes.

It’s unclear which hotel Mickelson was staying in. But Chicago sportscaster Peggy Kusinski tweeted this photo of the Eaglewood Hotel, which is adjacent to Medinah Country Club, the site of this week’s PGA Tour stop:

Severe weather this AM at Medinah CC for #BMWChampionship final round. Reported lightning strike to the roof of Eaglewood Hotel that lines the course & where many officials staying! pic.twitter.com/aUxltXiiSS

Scary stuff. We hope everyone is OK.

Back to Phil, who needs something miraculous to make next week’s Tour Championship. Turns out, he will make his 11:52 ET tee time at Medinah. Forty-five minutes after Mickelson’s initial tweet, he added this follow-up:

EMT’s were awesome! I’m going to make it. Turns out my clubs acted as a fire retardant. Lucky me?

What will Phil do next? Find humor in whatever situation he finds himself in. Obviously.

UPDATE: The Caddie Network spoke with Phil’s looper and brother, Tim Mickelson, who said Mickelson will have a limited warm-up. Tim also said he believes other players, including 54-hole leader Justin Thomas, are also staying at the hotel:

We just heard from caddie Tim Mickelson who told us: “Very bizarre. Hotel is only 1 mile from the course. I believe other players were there too, including JT. I’m not there. He will make tee time but very limited warmup if any.” https://t.co/dHDAnz7wtn

And here’s Phil arriving at the course:

Phil Mickelson is at Medinah. Pulled in at 10:15 local. Arrived in flip flops and put his spikes on in the parking lot. Took a couple swings with a training aid and went to the range. He’s off 10 tee in 30 minutes. pic.twitter.com/H3WP2tKHz7

We will continue to monitor the situation.

UPDATE NO. 2: After shooting a final-round 71 to finish T-48, Mickelson talked about his eventful morning:

“Yeah, kind of a funny deal,” he said. “The building got struck by lightning right above me and blew out a brick chimney and caught fire a little bit. There were ten fire trucks. I got in my car and left and couldn’t get back. The roads were closed and the hotel was closed. But things cleared up pretty quickly. I was able to get back in and get my stuff.”

And then there was this exchange with reporters:

Q. Phil, can you — so the fire occurs and you go down and get in your car and drive off.
PHIL MICKELSON: Yeah. There were people outside. It was raining. The roads were closed and I couldn’t get back in. It cleared up pretty quick.

Q. Were you really like “God, I should have brought my clubs with me just in case” or —
PHIL MICKELSON: No. I was just thinking I’ll be in San Diego a little earlier than I expected and — it all worked out. It was fine.

Q. Your sister said she was worried about you, your mom.
PHIL MICKELSON: I’ve been playing. I don’t really call everybody while I play. I haven’t talked to anybody yet. But I will in a little bit.

Q. The EMTs got you back into your room; is that what happened?
PHIL MICKELSON: Yeah. They had been in contact with the Tour but they were clearing up. It didn’t matter.

Q. (Inaudible) PHIL MICKELSON: I had plenty of warmup, 20, 30 minutes. It all worked out great except my score.