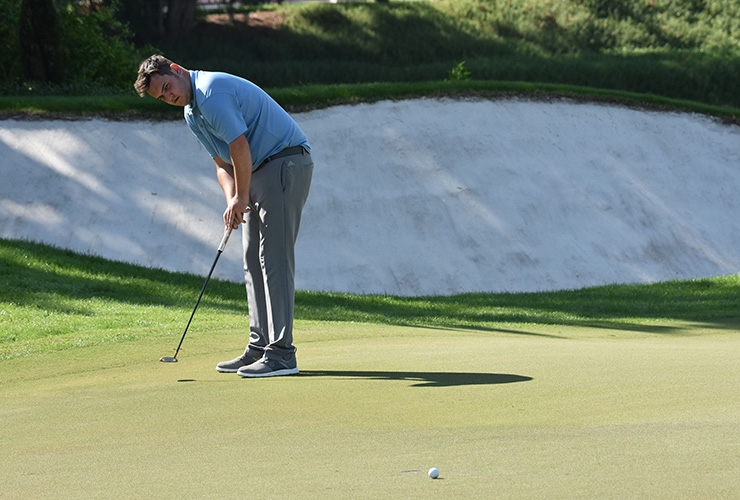 George Groves, the World Ranking for Golfers with Disability (WR4GD) No. 1, in action at the DP World Tour Championship, where he lifted the EDGA Dubai Finale trophy in November.

By Kent Gray
The European Tour welcomed the European Disabled Golf Association (EDGA) to the Race to Dubai decider last November. The MENA Tour by Arena has picked up the baton and really run with it.

The regional developmental circuit has reached an agreement with the EDGA that will give players with an official World Ranking for Golfers with Disability (WR4GD) and a handicap of 4.4 or less a chance to tee it up on one of three MENA Tour event in the next two months.

“MENA Tour by Arena have shown great vision in making this agreement to include golfers with a disability in this exciting Tour by opening up these invitations,” Bennett said. “The agreement will encourage other organisations to take their responsibility to make golf a truly inclusive game more seriously.

“Such initiatives help create a trickle-down effect and grows awareness of the sport, even for those who have not yet considered golf to be a sport of their choice.”

In Addition to the two European Tour events last year, 12 players competed alongside the professionals in the Australian All Abilities Championship.

“At the MENA Tour by Arena, we want to be proactive in creating awareness and facilitating change, and also play a role in growing the game,” said Wayne Johnson, MENA Tour Tournament Director and Player Liaison Official.

“We are thrilled to announce this opportunity for golfers with disability to play alongside our professionals at three world-class venues in the UAE.

“Last season, the MENA Tour, along with our main sponsors Arena Middle East & Asia, announced we will refrain from using single-use plastic water bottle as part of our commitment to the environment, and this agreement with the EDGA is another example of us being socially responsible.”

Letters of application should be sent to the EDGA Director of Tournaments, Manon Eggermont at [email protected] The closing date for applications for EDGA members for each tournament will be one week before the closing date of entries for the tournament.

After wins for Englishman David Langey and Frenchman Sebastien Gros at the Journey to Jordan #1 Championship and NEWGIZA Open respectively, the MENA Tour moves to Oman this week for the Ghala Open in Muscat.