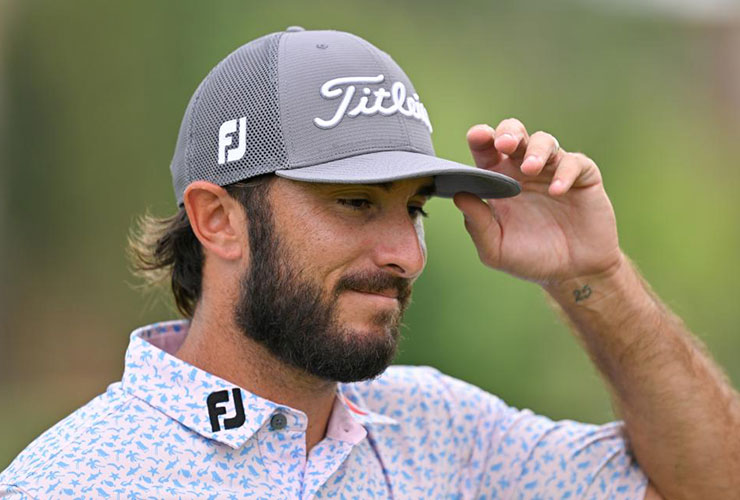 By Dave Shedloski
With two PGA Tour victories and a successful debut in the Presidents Cup, in which he went unbeaten in four matches as a captain’s pick for the victorious US team at Quail Hollow Club, Max Homa undoubtedly enjoyed his finest year as a pro golfer, climbing to 16th in the Official World Golf Ranking. Throw in the fact that he became a father for the first time a month ago, and all is right with the world for the California native.

Except for one thing.

“Got to figure out more ways to impact the golfing world,” he said, mostly tongue in cheek, on Wednesday as he gears up for the Hero World Challenge that begins Thursday at Albany.

Homa’s comment was in reference to the PGA Tour’s Player Impact Programme, which recently doled out $100 million in bonus money to 23 players who boosted publicity for the tour in 2022. Tiger Woods, the host at the Hero this week, won it for the second straight year and received $15 million. Homa, after being shut out in the inaugural year that paid only the top 10 players, finished a respectable 14th.

An engaging sort who became popular through his social-media posts before he started gaining traction on the golf course, Homa was a bit surprised that he didn’t finish higher. He still earned a cool $3 million, but it’s not about the money. As he explained in talking about his assessment at the end of each year: “I don’t look back and say: ‘Ooh, yay, I made X [amount of money]. I say I had five top-10s, I wish I would have had eight; I had 10 top-25s, I wish I would have had 15 or whatever.’ ”

That said, the PIP ranking has some meaning, too.

“It is what it is. I’m frustrated I lost to [Kevin] Kisner [who finished 13th]. I’m not quite sure how that happened,” Homa said with a sarcastic grin. “Played better than him, carried him at the QBE last year, so not sure how I lost to him. So that was disappointing.

“Just back to the drawing board, got to figure out more ways to impact the golfing world. I am surprised that I’m 16 in the world and I was 14 on the PIP. I always thought I was significantly more popular than I was good at golf, so it feels nice that those things are aligning. So that’s a little mini bonus.”

The tour used five measurements for the PIP rankings: Internet searches, the number of unique news articles that include a player’s name, duration that a player’s sponsor logos appeared on screen during Saturday and Sunday tour broadcasts, a player’s general awareness score among the broad US population, and social-media score that considers a player’s reach, conversation and engagement metrics.

As an illustration of how Homa’s mind works on the social-media end, he explained how he tried to “insert” himself into the rumour mill regarding a possible move to LIV Golf. He didn’t have an interest in leaving for the tour, he just wanted to be included “for the fun of it” in the ongoing conversations that permeated golf, which he likened to being in high school.

“I guess it would have been cool to be a part of that so I could live the life of, you know, it felt like a reality TV series for a bit,” he said. “I changed my bio on Twitter once when I think Brooks [Koepka] changed his bio and everyone figured out he was going [to LIV]. I was like: ‘Oh, I’m going to get in on this and see if people catch on but didn’t realise that my Twitter bio doesn’t get a ton of traction, so that was news to me.”

This is the guy whose childhood screen name was “NextTigerWoods59”. He got real popular because of that. So, he knows how to work the attention angles.

“I had fun with it. It was taken as like slights to the LIV Tour, but I never meant … I just make fun of everything that I do and what other people do,” Homa said. “So it was funny. I would have liked to be caught in the rumour mill so I could have run with it for a little while, it would have been good for that PIP thing, but was not lucky enough to be caught up.”

In the end, he understands that if he continues to play as well as he has of late, and if he improves his performance in major championships — his best finish in 12 majors is a tie for 13th at this year’s PGA Championship — that will be more impactful, which is all he wants in the end. “I want people to watch golf more just because I love the game of golf,” he explained.

Bottom line, he really has no complaints. “Tiger won again,” Homa said, “so as long as he’s winning, it’s not broken, so that’s good.”