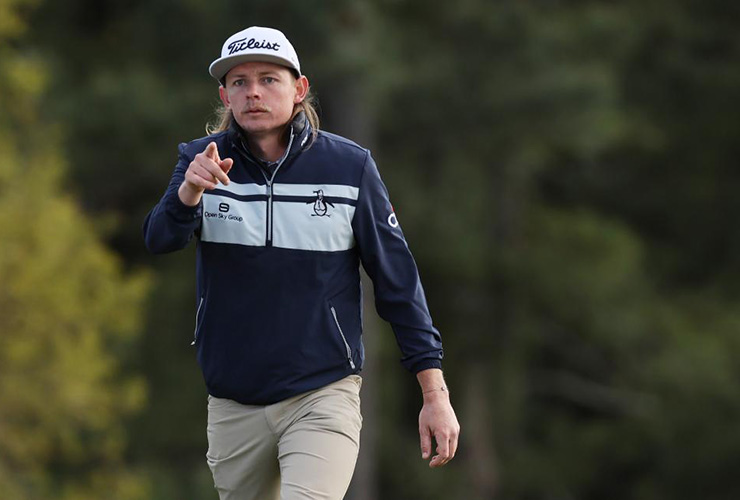 Cameron Smith walks across the 18th green during the third round of the Masters. Gregory Shamus

By John Huggan
AUGUSTA, Ga. — Yes, he continues to trail longtime leader Scottie Scheffler by three shots, but there are a number of legitimate reasons to think Cam Smith might just become only the second Australian to finish first in the Masters.

We’re talking here about the sixth-best golfer on the planet, if the World Ranking is to be believed. Just three weeks ago, Smith won the biggest event of 2022 so far, the Players Championship, against what is, statistically at least, the strongest field in golf. Two months before that, he saw off the then-World no.1, Jon Rahm, to win the Sentry Tournament of Champions in Hawaii.

And there’s more, specific to the Masters. Only a year-and-a-half ago, Smith tied for second place in the 2020 “toonamint,” in the process becoming the first man to break 70 in all four rounds. And his latest effort, a third round 68 that was the best of the day by two shots, was compiled in conditions best described as “brutal.”

When it comes to Augusta National, this 28-year-old Queenslander knows how to get things done. No matter what.

Which leaves one obvious question: Can Smith finish the job and take out Scheffler, currently the hottest golfer on the planet? For all his fine play so far, the 25-year-old Texan did play the last five holes of his third-round 71 in a stuttering two over par to give credence to the notion that this event is far from over. What was once a procession is now a legitimate pursuit. Add that little nugget to all of the above and the man in second place would be less than human if he didn’t sense the merest hint of blood in the frigid air.

Along with the rest of the well-wrapped-up competitors—the hardest part of the round was, Smith felt, “keeping my hands warm”—the two-time Australian PGA champion was at pains to point out just how difficult the scoring had been. But not impossible. On a day when the field averaged in excess of 74.5, Smith’s six-birdie haul was all the more impressive.

“It was really tough out there today,” confirmed Smith. “With this west wind there’s not many holes you get straight downwind or straight into the wind. There are lots of crosswinds, which makes it tricky into the greens. Controlling distance was pretty difficult, especially when there are so many uneven lies around here as well. There are so many things to really think about.

“You have to hit different shapes and try to judge the wind as well. But I did a good job of just staying within myself, staying patient with the course. I did hit lots of quality iron shots. And today the putts went in as well.”

That is the sort of formula Smith will have to repeat over the closing 18 holes if he is to follow compatriot Adam Scott into the champion’s locker room. But with the weather forecast to be less windy and certainly a bit warmer, there will also be a need for more aggression amidst the requisite perseverance required to win at this elite level. To that end, Smith—a compulsive leader board watcher—will continue to pay attention to anything and everything going on around him.

“I believe in looking at what you need to do,” he said. “The goal today was to keep making birdies. I could see Scottie was making a few, so I was just trying to keep up.”

Still, amidst his inherent modesty, perhaps Smith’s biggest asset going forward is the confidence that has grown and flourished amidst his many recent successes. In that respect, he is the only rival to Scheffler’s three-win run over the last few weeks.

“My play this year has shown me I can get it done when I’m up against the best guys in the world,” said Smith. “It’s a good feeling to have. It’s earned. It’s not given to you. So, I’m going to have to go out there tomorrow and play really good golf again, probably similar to today. Hopefully everything falls into place. I can’t control what anyone else is going to do tomorrow. So, I’ll go out there and really focus on myself.”

MORE MASTERS 2022 STORIES
Scottie Scheffler’s big year has the chance to become historic on Sunday at Augusta
Every Tiger Woods Masters record
The entire field at Augusta, ranked
The history of honorary starters
Now comes the hard part for Tiger
How will the amateurs get on at Augusta?