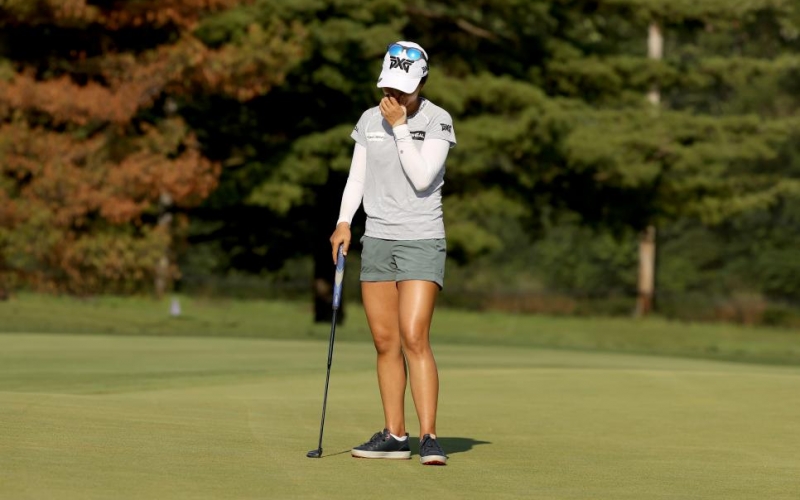 Gregory Shamus
Lydia Ko reacts after a putt on the 18th hole, on which she made a double-bogey 7 in losing the Marathon LPGA Classic to Danielle Kang.

By Keely Levins
Momentum, no matter how steady it seems, can shift quickly on the golf course. Lydia Ko appeared to be in control of the Marathon LPGA Classic, but a couple bogeys in conjunction with Danielle Kang’s birdies, and the momentum moved on the back nine at Highland Meadows Golf Club in Sylvania, Ohio.

What was at times a five-shot lead for Ko during the final round suddenly became a one-shot margin with two to play. The momentum shift was complete when Ko’s short-game troubles led to a double-bogey 7 on the 18th, and Kang mustered a par from a difficult bunker lie to win the tournament by one. It marks her second win in two weeks on the LPGA Tour.

While watching Kang go back-to-back was exciting, seeing Ko lose had a gut-wrenching quality to it. It even hurt Kang. “It was a bit rough watching how it ended for Lydia as well, to be honest,” she said. “You know, just as a competitor and as a friend, you just want it to be a bit—I don’t know. That ending was—I wished for more for her for that one.”

The tournament felt like Ko’s since the second round, when she started off with four birdies in a row. She led by a shot going into the weekend and was comfortably four strokes ahead when Sunday’s round began. The former World No. 1 hasn’t won on the tour since 2018, and the lead on Saturday hinted at a potential resurgence for Ko, who has returned from the break with a new coach, Sean Foley, and some muscle gained. She jokes she drinks protein shakes now, but not as many as the PGA Tour’s recently beefed up Bryson DeChambeau.

Ko’s short-game touch abandoned her on the 18th: A hot chip that ran across the green, a follow-up that rolled back into a bunker, and a two-putt for double. The former prodigy and 15-time tour winner lost her chance to hoist another trophy.

Ko showed resilience when talking after the round.

“I think I have to see the positives,” she said. “I’m pretty sure I’m going to be disappointed and go, Oh, man, I should have done this over that. But when you look back at everything and you take everything apart, you’re going to have so many things to like think so negatively about.

“But I think there are so many positives from this week, and I feel overall more confident in my game. I think that’s really the goal I had coming into the this stretch after quarantine.”

The goal of confidence shows Ko’s vision is wider than winning or losing this one tournament. With confidence in her game, losing this tournament doesn’t matter as much, because she has hope these opportunities will continue to come.

The easy reaction from fans is that Ko was on her way to returning to her former, winning self—and then lost it. But what’s happening with Ko is a more complex than that. A week before the tour restarted play, Ko met with the media via Zoom and explained how she thinks about where she is with her golf with a maturity that far exceeds her 23 years. She recalled a conversation with Stacy Lewis, a player who also held the No. 1 spot. 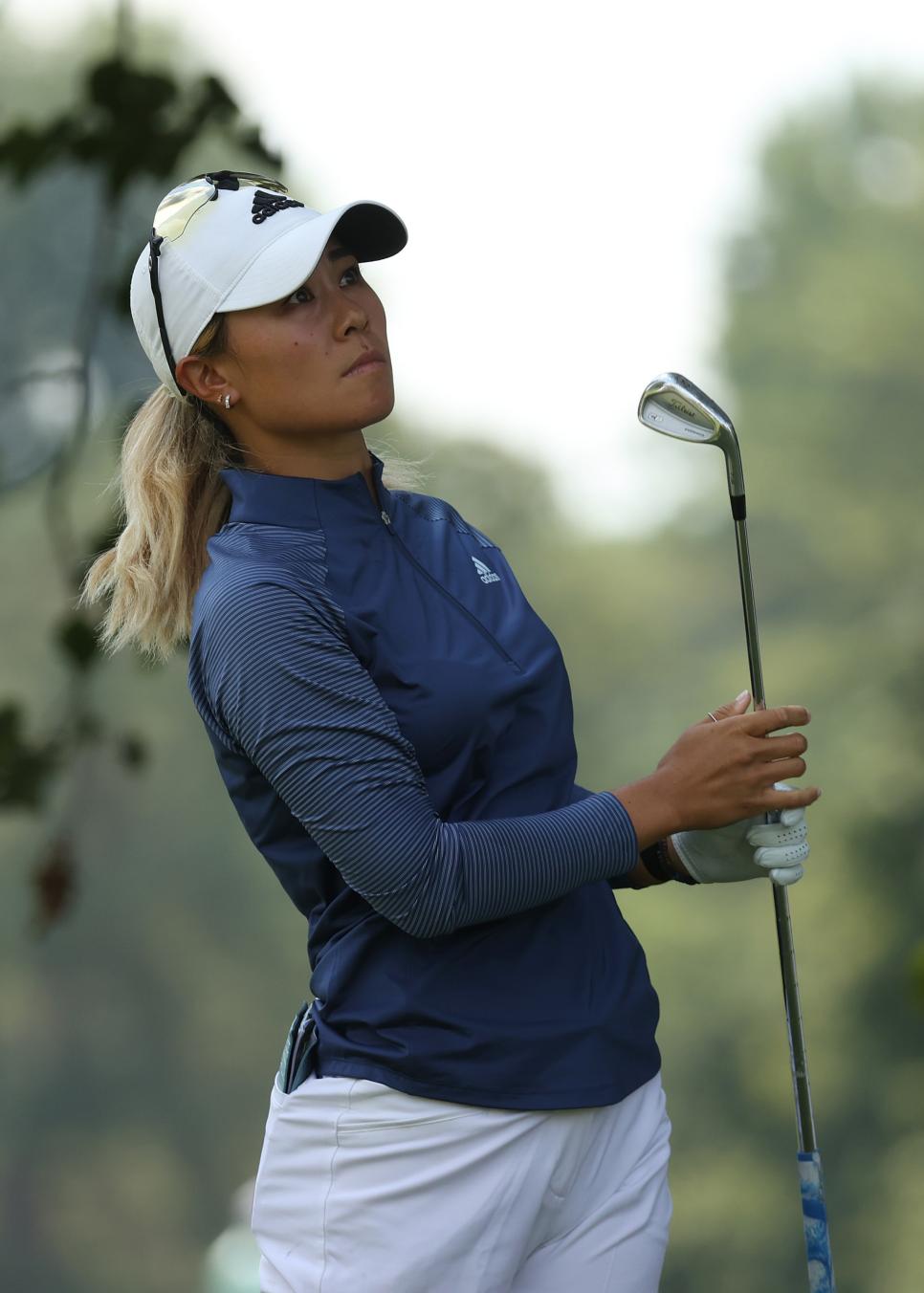 Gregory Shamus
Danielle Kang hits a tee shot on the second hole during the final round of the Marathon LPGA Classic at Highland Meadows Golf Club.

“What she was at that time,” Ko said, “and she told me at one event, ‘Hey, you can’t try and be someone that you were. … All you can do is try your best from there.’ I think that really resonated with me, and that made me realize, you know what, I can’t try and be somebody who I was before, and I’ve just got to be the best possible person of me today.”

While we watch Ko in her pursuit of finding her golf game, we can’t expect her to revert back to the golfer she was. Instead, we are witnessing her create the golfer she is going to be. How successful that golfer will be is yet to be seen, but a four-shot lead heading into a Sunday, whether it was capitalized on or not, has to be a good sign.

Though it didn’t happen the way Kang exptected, it was her fifth win on tour. She had won once each year since 2017, and now has added the two victories in two weeks. 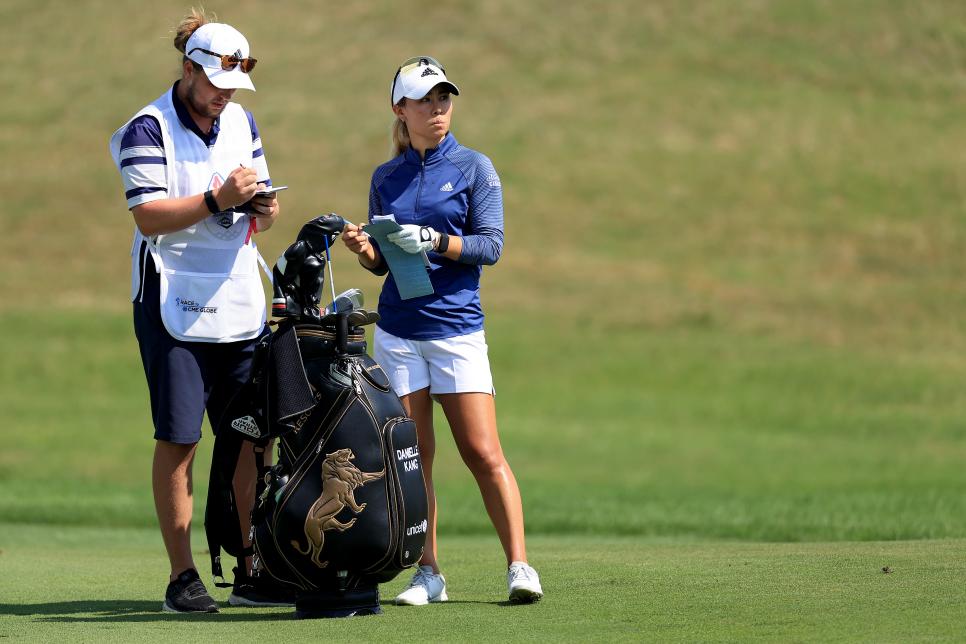 Andy Lyons
Danielle Kang waits to hit on the ninth hole during the final round of the Marathon LPGA Classic at Highland Meadows Golf Club.

There’s never been a question about Kang’s talent. She qualified for the U.S. Women’s Open as a 14-year-old who’d only been playing the game for about a year and a half. She won the U.S. Women’s Amateur in 2010 and successfully defended in 2011. That first win she recorded on the LPGA Tour was a major, the KPMG Women’s PGA Championship.

Kang is quick to credit her coach, Butch Harmon. In a time when Harmon was taking a step back from travelling with the PGA Tour and working with many of its stars, Kang found her way onto his roster at the end of 2018. The partnership was successful almost immediately: She won a month after they started working together. Since then, she’s gotten longer off the tee, and over the tour’s five-month break they tackled her 3-wood and started work on her wedges.

At the Marathon, she noted another member of her team, her caddie, as providing helpful insight on-course.

She birdied the next hole, and parred her way in to secure the victory.

Kang will ride the momentum from the win straight to the airport, as the players from the LPGA get on a charter flight to Scotland for next week’s Aberdeen Standard Investments Ladies Scottish Open, followed by the AIG Women’s British Open.