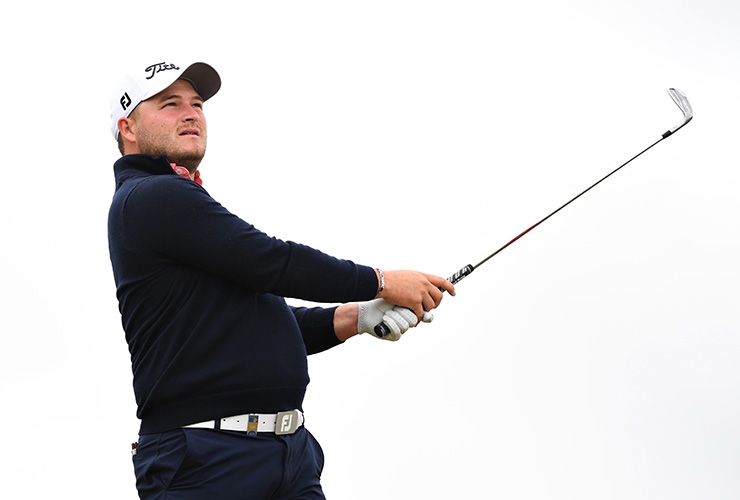 By Kent Gray
Zander Lombard is halfway to an elusive European Tour victory and has recent pedigree in the Dubai Duty Free Irish Open to give him a healthy dollop of hope that he can finally get over the line at Lahinch Golf Club this weekend.

The 24-year-old South African fired a second-round 67 to go with an opening 64 to earn the 36-hole lead at the $7 million European Tour event on Friday.

Lombard’s career-best collect in four full seasons on the European Tour was the €168,335 he banked for a share of sixth place at last year’s DDF Irish Open at Ballyliffin. He’s also come close to a maiden European Tour victory twice before with runner-up finishes at the 2017 Rocco Forte Open in Sicily and the 2016 Joburg Open.

The challenge for Zombard is recent form – he’d missed eight successive cuts leading into the week in Co. Clare and is only on tour this season after successfully regaining his status at Q-School late last year – and perhaps more so from the pedigree around him on the leaderboard.

Sidelined with a back injury since the U.S. PGA Championship, Englishman Eddie Pepperell is just a shot back on -8 heading into moving day while former world No.1 Lee Westwood headlines a three-way tie for third at -7. Even defending champion Russell Knox is in the mix; a last hole eagle for a Friday 68 has the Scot at -5 in a share of 12th with the likes of Dubai-based Ryder Cupper Rafa Cabrera Bello and former MENA Tour member Robert MacIntyre.

Lombard was accentuating the positives after his second round.

“I missed a few cuts coming into this week and it’s been three months of hard work,” Lombard said. “I had to change a few things in my physique and how I swing the club so it’s nice to see the hard work coming off and what a better place to see it happen.

“It’s been really good golf, solid, and I’m just really enjoying being at the top.

“I’m so comfortable on links golf. It’s never just a normal shot, it’s always a little three quarter, a little punch, judging the wind right. I had a good amateur career on links golf and brought it over to my pro career as well.”

Given his time on the sidelines, Pepperell is understandably surprised to be in contention.

“I really had no idea where I was standing at so to have this performance through two rounds is certainly a nice surprise,” said the 28-year-old who captured the Qatar Masters and British Masters in a breakout 2018.

“I’m not hitting the ball perfectly but my short game has been feeling good. We’ll just see how the weekend goes.”

On this week’s Player Blog, @BeefGolf opens up about his mental health struggles, adapting to becoming famous and how with the help of his fiancée and psychologist he is rediscovering his love for golf.https://t.co/J7POokEfXc