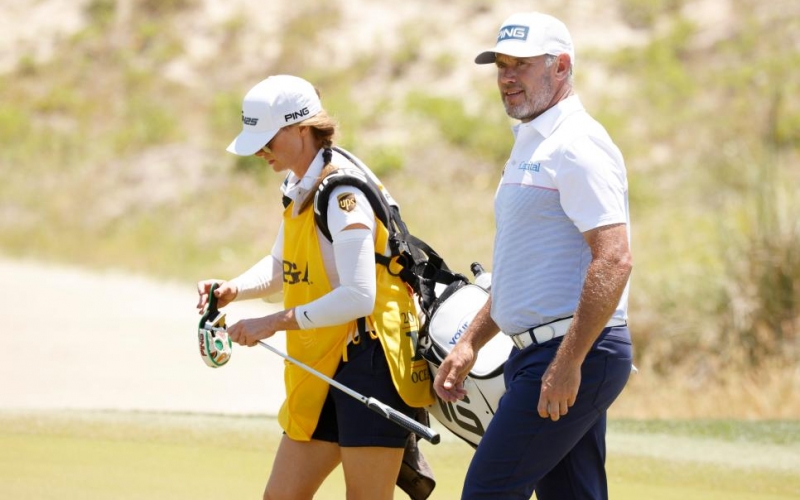 By Joel Beall
SAN DIEGO—There is a chance you, dear reader, are in the throes of wedding planning, a ring of hell Dante could not have fathomed. And if you’re in that pit, we’re afraid it is too late, for no ladder extends that deep to get you out.

But for those who have not ventured into this abyss, there is hope. Let Lee Westwood be your shining lighting in the darkness.

Westwood recently was married to longtime girlfriend/part-time caddie Helen Storey in Las Vegas. And we do mean “recently;” this week’s US. Open is serving as the pair’s honeymoon, according to Westwood. That new marriage bliss had Westwood in high spirits Wednesday when speaking to the media at Torrey Pines. Or perhaps he was in high spirits because Westwood was able to avoid the trappings that usually comes when organising nuptials.

“No, there was a huge amount of planning that went into it,” Westwood said. “About four weeks.”

Four weeks! Most have to set aside four weeks, minimum, for table arrangements. Choosing a DJ is half a baseball season. What is the secret, Lee?

“It was amazing how easy it was to do,” Westwood explained. “They obviously have a lot of weddings in Las Vegas, and it’s a finely tuned machine. Picking up the licenses was no great trauma. I think we were in and out in about ten minutes. Fortunately, Helen said I do, so yeah.”

In other words, while the rest of us poor bastards climbed a mountain in weighted boots, Westwood decided to take a helicopter to the top, waving and smiling at us through the cockpit.

However, it’s not all smooth sailing, as Westwood says he and Helen’s definition of “honeymoon” differs. “I keep telling her [this counts], but I think she’s got her eye on somewhere where I don’t take the golf clubs,” Westwood said.

Still … four weeks. On behalf of everyone who has ever torched a year (or longer) worrying about a ceremony that’s over in six hours, thank you, Lee, for being the hero we need.