The Open 2017: Kuchar savours the sanctuary of the sofa 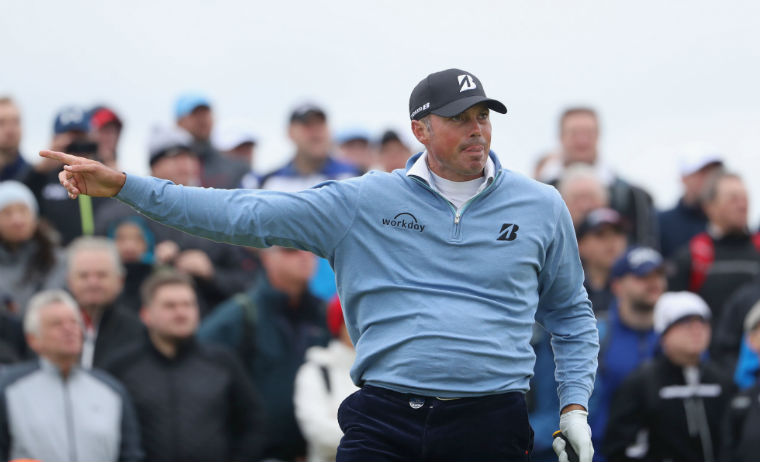 Sometimes even the best players in the world prefer being armchair experts at The Open Championship.

Matt Kuchar was certainly looking forward to his afternoon in front of the telly after securing the early clubhouse lead at Royal Birkdale on Friday, a second round one-over 71 getting him to the sanctuary of the sofa at -4 for the championship.

Brutal 35mph (56kmh) winds made Kurchar’s second loop a topsy-turvy struggle but with rain starting to lash across the Southport links, his fellow first round co-leaders Jordan Spieth and Brooks Koepka were in for an altogether more uncomfortable afternoon.

The major-less 39-year-old Floridian twice enjoyed the outright lead at -6 on Friday before two late bogeys ensured Spieth and Koepka at least started their rounds in front. But given the gnarly conditions, there’s a good chance Kuchar will be top or very near it heading into moving day.

A glance of Charl Schwartzel’s card offered a perfect illustration of the difficulty facing the late starters. Out early a shot back of the leaders, the South African earned himself a share of lead with a birdie at the fourth but went rapidly backwards thereafter, eventually signing for an eight-over 78. The former Masters champion is +4 for the championship, right on the bubble for the weekend cut.

So it is more satisfying battling through tough conditions relatively unscathed or watching the likely carnage?

“Being out there in the arena is exciting” Kuchar said, “but certainly once you’ve done it and get to watch, [it’s] kind of the icing on the cake, maybe.

“I’ve had a couple of situations where it’s been flip-flopped. I’ve had a couple where for instance I’ve sat out some morning matches in Ryder Cup matches. Watched it on TV. Just being a fan thinking, this is amazing. And to think to myself, holy cow, I’m going to go do that this afternoon, and a fun thought.

“The British Open, I don’t know that the guys that watched this morning get to think, holy cow, this is going to be great, I get to go out and do this this afternoon. So in my situation having been out there, posted a nice round and now get to watch is fun, put on the TV and watch the guys play in the afternoon, and particularly in tough conditions.”

Of the others on the front page of the leaderboard and already in the hut, only Scot Richie Ramsay (70) and Rory McIlroy (68) scored better in the tricky morning conditions.

So can you give us a sense of how tricky it was?

“What stood out to me was the 12th hole, it was a par 3. I think it was playing about 162 yards today. Wind was in off the left. I pulled 5-iron. And there’s a hill right of the green with nasty, weedy grass that you just don’t want to be in. So I must have aimed 30 yards left of the pin into the crowd, hit a shot, started at the crowd, and stayed at the crowd for a long time before finally the last, I’d say, 20 yards started drifting over, and ended up in the middle of the green.

“There’s a whole lot of trouble to be had and trying to hit solid shots that the wind is going to affect the least is challenging. And even with — I feel like I hit that shot on 12, I feel like if there was no wind it would have gone dead straight; it probably moved 30 yards. It’s really tricky, really trying to try to figure out.”