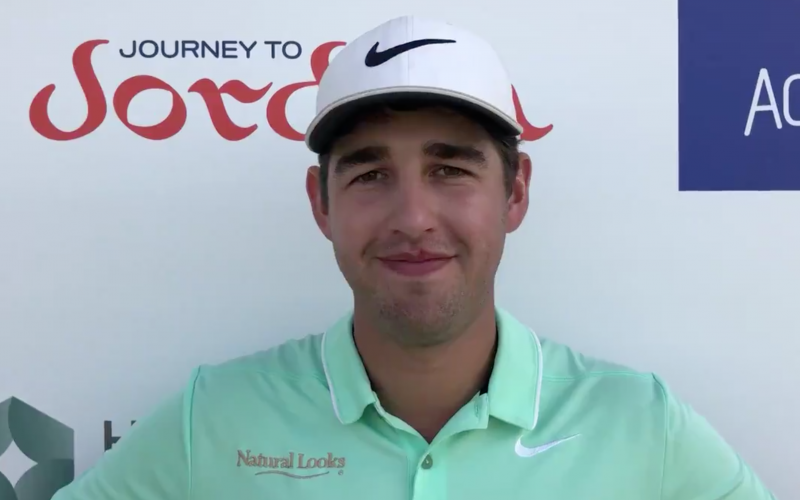 By Kent Gray
There was a bitter-sweet finish for Dubai teen Josh Hill and last gasp heartache for Joshua Grenville-Wood as England’s Harry Konig captured the MENA Tour’s Journey to Journey Tour Championship with a dramatic late birdie-barrage.

Konig rattled off four birdies in his last five holes for a closing 69 to set the clubhouse target at Ayla Golf Club at -11, 205. Grenville-Wood, who like Konig had started the final round of the season a shot adrift of Hill, lead on -12, had the chance to win with a birdie on his 54th hole or force a playoff with a par but will rue a bogey-bogey finish in end in a four-way tie for second alongside fellow Englishman Todd Clements, Jamie Rutherford and 2017 Tour Championship winner Henric Sturehed (Sweden).

Our champion!! @HarryKonig1 is a bit emotional after winning the Journey To Jordan Tour Championship. He birdied four of last five holes to win on -11. pic.twitter.com/K5zrihLuk7

Hill, meanwhile, stumbled to a closing 76 to finish T-9 on -5, alongside among others, fellow Dubai-based amateur Arjun Gupta.

The overnight leader’s shot at yet more MENA Tour history went south early, a double bogey on the 8th contributing to a four-over outward nine played in 40 strokes. The consolation for the 15-year-old Ain Ain Open champion was his top-10 saw him just sneak above Curtis Knipes to win the amateur Journey to Jordan order of merit title and a start in January’s Omega Dubai Desert Classic.

Dubai-born 15-year-old Josh Hill is our Amateur Journey To Jordan champion! He will be making a dream start at the 2020 @OMEGAGolfDubai Desert Classic. pic.twitter.com/km3OdgksCa

Like Hill, MG Keyser won’t be thrilled with his closing 79 but still easily secured the professional Journey to Jordan title and European Tour starts in Dubai and Denmark next year, plus an invite to the Diamond Cup, an event co-sanctioned by the Japan Golf Tour and Asian Tour.

It was Konig’s first MENA Tour victory and is set to see his current Official World Ranking (OWGR) on 2061 soar. He had given little hint of contending in Ayla after missing the cut at the tour’s penultimate event at Tower Links and placing a lowly 53rd at Al AIn where Hill set the new mark as the youngest winner of an OWGR event at 15 years, six months and 27 days old.

But Konig found something in Aqaba, compiling rounds of 71-65-69 to secure the biggest win of his career. His closing round included an eagle on the 9th when he holed out his third shot on the par 5 amid what could have been a title ending run that read bogey, double bogey, bogey, eagle, bogey from the 6th to the 10th. But he bounced back with birdies at the 11th and 14th before sealing the deal with three successive birdies to finish.