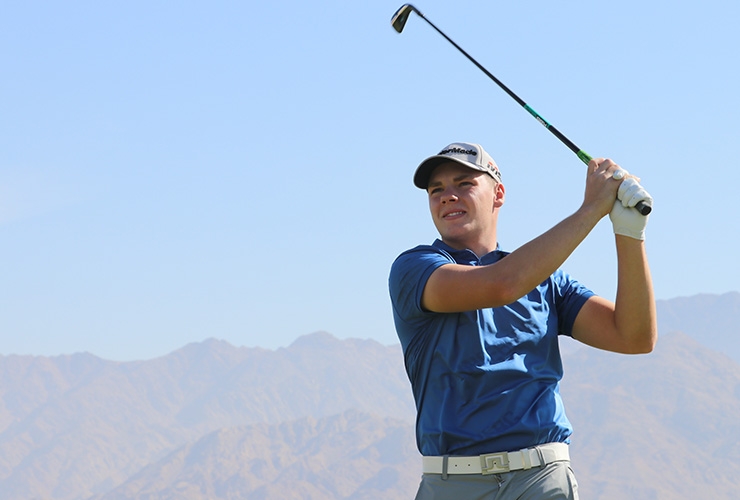 Joy Chakravarty/MENA Tour
Knipes during practice ahead of the Journey To Jordan Tour Championship at Ayla Golf Club.

By Kent Gray
Understandably lost in the global hullabaloo created by Josh Hill’s sensational Al Ain Open victory is the fact that Curtis Knipes has gone virtually the entire MENA Tour season atop the amateur order of merit standings.

The 18-year-old Englishman, who notably qualified for this year’s Open Championship at Royal Portrush during the MENA Tour’s mid-season break, will look to seal the deal at Ayla Golf Club in Aqaba this week.

While just three players are still in the running for the professional Journey to Jordan title, even Hill’s pal Arjun Gupta, down in fifth place, has an outside shot to win the amateur title at the $100,000 Journey To Jordan Tour Championship.

But it looks set to be a ding-dong battle between Knipes and Hill who eclipsed  Ryo Ishikawa as the youngest winner of an Official World Golf Ranking (OWGR) event – at 15 years, six months and 27 days old – in Al Ain.

The win earned the MENA Tour precious global recognition and Hill a place among the 10 finalists for the 2019  BBC Young Sports Personality of Year award. All the while, Knipes has got on with preparing himself for the final 54-holes of the season in Jordan. There’s a lot riding on it too; the leading Journey to Jordan amateur earns a priceless European Tour start in January’s Omega Dubai Desert Classic.

“It would be nice to win the Journey To Jordan and play the Omega Dubai Desert Classic,” said Knipes who leads the way with 21,662 points, 1957 clear of Hill.

“I felt that the Open Championship at Royal Portrush [where he missed the cut after qualifying], was a bit of a wasted opportunity, so it would be nice to test myself again. You never know what can happen if I play well there.

“Having said that, I am just trying to compete against the pros as I have done in every other tournament this year. Try and focus on the winning score and see how well I can play.”

Knipes, Hill and fellow English contender Jack Floydd are in the second group off the 1st tee at Ayla on Tuesday at 7.40am Aqaba time (9.40am UAE time).

This is how it stands in the Journey to Jordan as we head into the season-ending Tour Championship.

And to find out how some of the leading players can win the MENA Tour by @TGP_Dubai No1 crown, here are the various permutations and combinations…https://t.co/Np7Rdt1Wqv pic.twitter.com/YrHMowz9k0

WHAT THEY NEED TO DO…
Here are the various permutations for the amateurs at Ayla Golf Club:

JOSH HILL: Will have to finish inside the top-7 and then wait for Knipe’s result. If he is seventh, Knipes will have to be outside a tie for 39th place and Floydd outside the top-four.

JACK FLOYDD: Will have to finish inside the top-four to have any chance.

ARJUN GUPTA: Only a win will make it count for Gupta. If he wins, Knipes will have to finish outside the 37th place and Hill outside solo seventh.

European captain Pádraig Harrington will fittingly tee it up in the Abu Dhabi HSBC Championship.