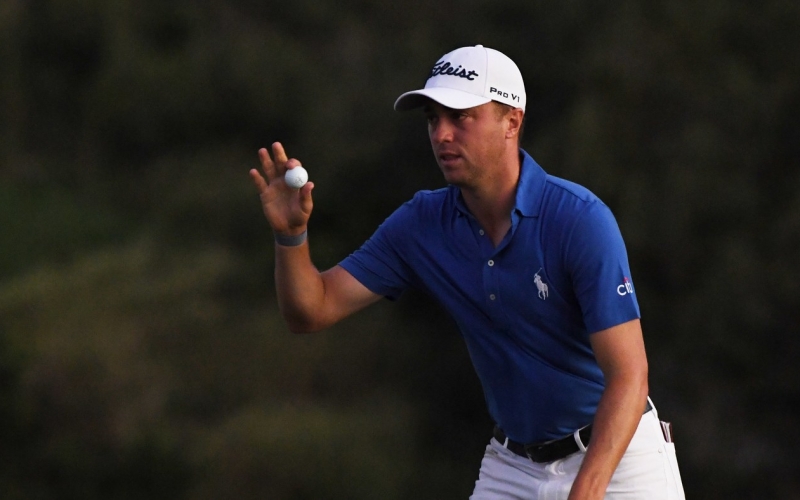 By Dave Shedloski
KAPALUA, Hawaii – A self-professed underachiever can either keep bitching about his underachieving ways or he can, you know, start achieving.

To be fair, Justin Thomas wasn’t whining earlier in the week here at Kapalua Resort when he opined on his career to date as less than fulfilling. More precisely, the former PGA champion and PGA Tour Player of the Year said he was, “disappointed I haven’t won more.”

So, more was on the agenda at the Sentry Tournament of Champions, and more is what Thomas got on Sunday at the Plantation Course when he alternately played brilliantly and badly before gathering himself to outlast Patrick Reed and defending champion Xander Schauffele in a sudden-death, sunset-beating playoff.

On the third extra hole, Thomas sank a three-foot birdie putt to finally put an end to Reed’s backdoor bid for the title after most of the day was a virtual showdown between Thomas and Schauffele. And both men in the final pairing had a legitimate argument that the first event of 2020 never should have gotten to a playoff.

RELATED: Xander Schauffele on the one that got away: ‘I should have won the tournament’

Thomas bogeyed two of his last three holes for a closing 4-under 69. Schauffele, the third-round leader, shot 70, but three-putted the last hole of regulation when two putts would have won it. Thanks to a bogey-free 7-under 66, Reed crashed the party at 14-under 278.

But in the end, Thomas claimed his 12th career PGA Tour title and third in his last six official events dating to the BMW Championship in August. At 26 years of age, the Kentucky native joins Sam Snead, Jack Nicklaus and Tiger Woods with a dozen victories before age 27.

Weird, but the guy who thinks he should have won more in his career probably shouldn’t have won this one. “For some reason I was supposed to win this week,” a bewildered-looking Thomas said as night gathered over Maui. “I got fortunate.”

For 15 holes, Thomas played like he was in a Geico commercial. He was all about more. More savings – of strokes. He turned a two-shot deficit to Schauffele after seven holes into a three-stroke lead through 12 on the strength of four straight birdies. He birdied six of eight in all after two-putting from the back fringe at No. 15 to reach 16 under par. 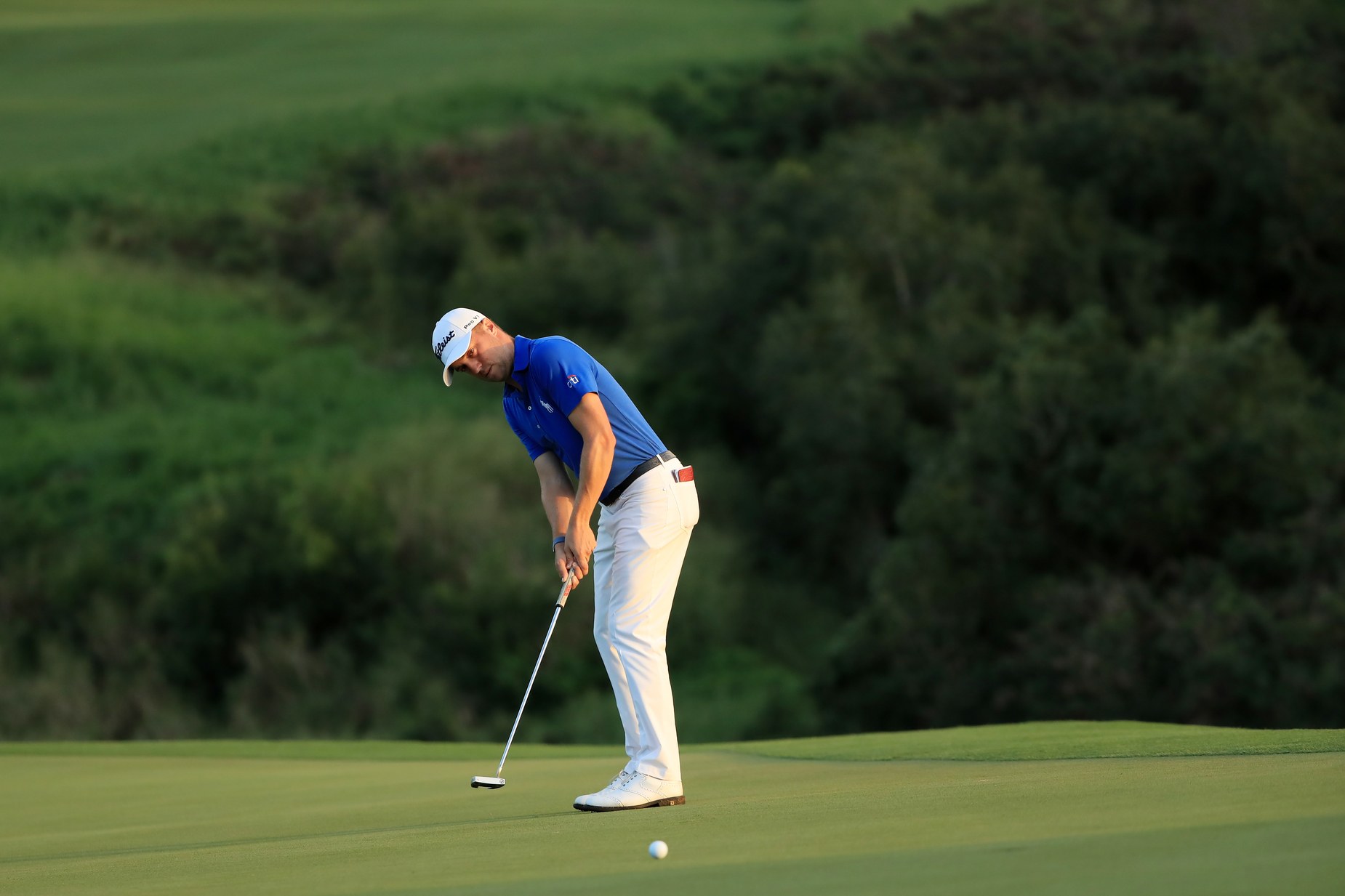 “Through 15 holes it was one of the best rounds I ever played,” Thomas, the No. 4 player in the world, said.

Inexplicably, he bogeyed 16 and then chopped up the long, downhill par-5 18th by hitting a weak toe-hook drive followed by a pulled 3-wood into the native grass left of the fairway, a stroke he forthrightly labelled as “stupid.” After a penalty drop, he gave himself a look at par from nine feet, but it dipped below the cup.

Schauffele, meanwhile, always seems to play best from behind, and when Thomas started to take control of the tournament, the Californian answered with three straight birdies of his own to keep in contact. After reaching the 18th in two with an approach from 305 yards, Schauffele had the title on his clubface again, but a three-putt from 36 feet let Thomas off the hook and let Reed into the playoff.

In his last two official starts, Schauffele had a chance to successfully defend a title but lost in a playoff in each. Rory McIlroy beat him in November at the WGC-HSBC Champions in China.

“I should have won the tournament,” said Schauffele, who fired a record-tying 62 in the final round last year to stun Gary Woodland. “Given the circumstances, I should have closed it out.”

The only drama Reed, dressed appropriately perhaps in all black, created was with all the proper shots, and there were many as he navigated the windswept Plantation Course for the low round of the day.

Thanks to a putting exhibition – he had 99 putts in regulation and led the field in strokes gained by a whopping 10.215 strokes – Reed posted 14 under nearly an hour before the final pairing finished and then watched Thomas and Schauffele open the door to a showdown featuring three former champions of this event. Reed, embroiled in a rules controversy in his last stroke-play tournament, the Hero World Challenge, had won in a playoff over Jimmy Walker in 2015 at Kapalua, while Thomas was the champion in 2017 on his way to a career year that featured five wins, including his PGA title.

Somehow, Thomas escaped disappointment and stayed alive as the 18th hole was played repeatedly. The third-round leader, Schauffele bowed out when he three-putted the first playoff hole from over 100 feet. Facing a tough pitch well right of the green, 36 yards out, Thomas nearly holed it, but managed to equal Reed’s two-putt birdie from 31 feet with a three-footer. The two halved the second playoff hole with pars, though again Thomas caught a break when Reed couldn’t convert for birdie from 12 feet after reaching the front of the green in two.

Thomas caught one last break on the final hole when he fatted a 5-wood on his second shot but managed to clear the hazard. He was money on the next, however, getting his 57-degree wedge from 113 yards to three feet. After Reed pitched his third to eight feet, he missed the left-to-right slider.

“I gave myself an opportunity,” Reed said after his sixth career runner-up finish. “But of course it stings at the end whenever you don’t birdie for the win.”

For a player so young, Thomas looked rung out, both physically and emotionally. And he was.

“But it’ll just take a little bit. Yeah, relief is definitely a word that comes to mind. But still very happy.”

Well, yeah. He has one more win under his belt and $1.34 million more in his bank account and has more wins than any current player under the age of 30, passing his good friend Jordan Spieth for that distinction.

One more win is indeed better. Even if it took three more holes and more than a little luck to get it.